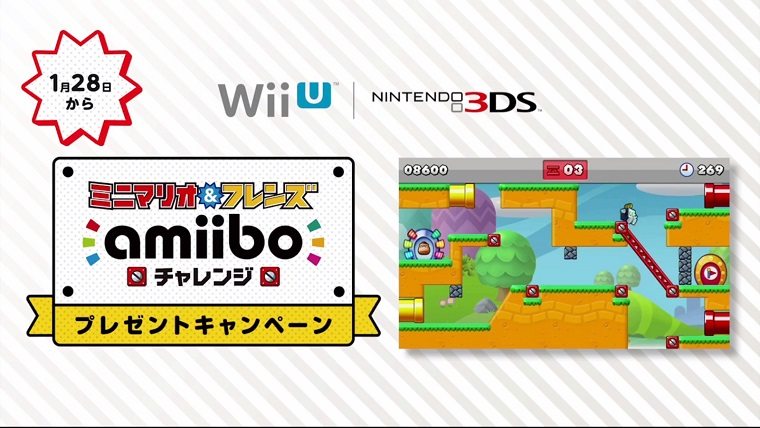 Ever since the launch of amiibo back in November 2014, they have become a major part of Nintendo’s future plans due to their success. We got the very disappointing Animal Crossing: amiibo Festival back in November, but it looks like Nintendo is giving the amiibo game idea another try with a new Mario vs. Donkey game, though with a little bit different name.

Nintendo of Japan posted this evening a new video showing off the variety of uses of amiibo in different Nintendo games. The last half or so of this video however focused on a brand new amiibo based game that is translated as Mini Mario & Friends: amiibo Challenge.

Coming to both Wii U and 3DS, this game also got an official website in Japan that shows off compatibility with 10 different amiibo, which include Mario, Luigi, Peach, Yoshi, Rosalina, Toad, Bowser, Baby Bowser, Donkey Kong, and Diddy Kong. Interestingly, Wario is left out, but with his character being associated with Wario Ware, I guess it makes a little sense.

Thanks to translation by NintenDaan on Twitter, we know a little bit about how this game will be distributed, though it’s still quite confusing. He says that download codes for this game will be coming with amiibo in Japan, which I would assume would be the ones listed above.

With the Japanese release, that appears to be the only way to get the game for now, though it is supposed to come to the eShop for both Wii U and 3DS at a later date. However, what we don’t know is whether this will be a game you have to pay for or will be free to play, with amiibo unlocking new content within the game. Hopefully it is the latter, but with them charging near full price for amiibo Festival, it wouldn’t surprise me if it cost money when it’s actually released.

At this point, we’ll have to wait for more details. With a few Nintendo related things popping up today, it might seem a new Nintendo Direct could be coming soon that could give us such information. It looks like this will be releasing on January 28, so if one is coming to show this game off, it will need to happen in the next two weeks.

If you are interested in seeing the trailer for the game, make sure to check it below: