New Pokken Tournament Fighter To Be Revealed Next Week 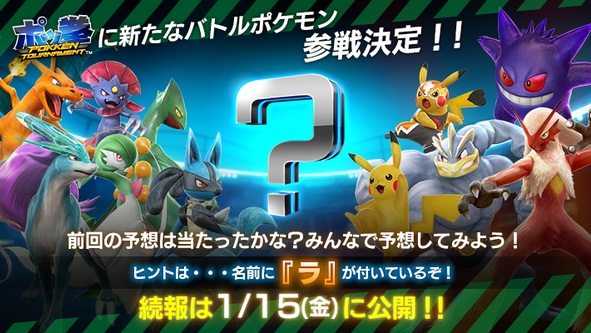 It’s not too long now until we know who will be the next fighter to be included in Pokken Tournament.

The official Pokken Tournament Twitter page tweeted out the following image. The Japanese text says that fighter will be revealed on January 15th. It even gave us a small clue on who it might be.

The clue as pointed out by a user on NeoGAF is that this Pokemon may have a Ra or La in its name. This kind of narrows it down. Although it does not narrow it down by much since there is well over 700 Pokemon to choose from.

Some feasible guesses can be “Lapras”, “Heracross”, or “Raichu”. The latter might not be in it as there are already similar Pokemon like them already added. Raichi is basically an evolved version of Pikachu.

Pokken Tournament will be out for Wii U on March 18th, 2016 in Japan. There’s no release date yet for North America and Europe.