The latest news in the world of video games at Attack of the Fanboy
July 26th, 2014 by Kyle Hanson 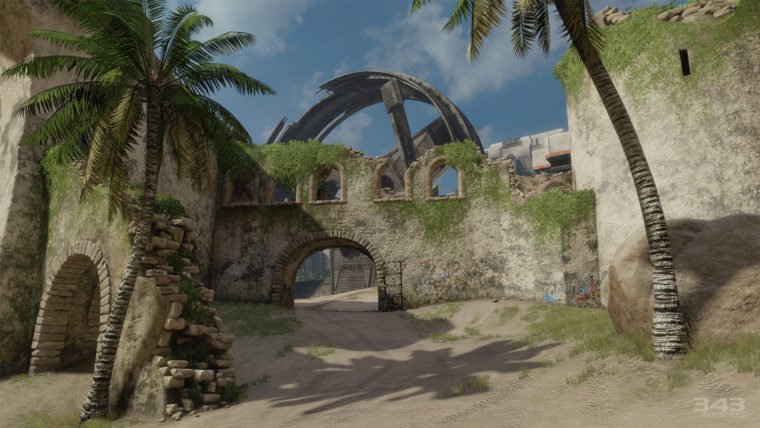 Yesterday came the news that fan-favorite multiplayer map Zanzibar would be among the six remastered for Halo 2 Anniversary Edition, as part of Halo: The Master Chief Collection. One image was shown during the announcement, but a new Halo Waypoint page has dropped a ton of new screenshots and concept art. Scroll through the images above to see just how great this new version of the old classic is going to look.

Scroll through these new screenshots and concept art for the remastered Zanzibar from Halo: The Master Chief Collection

The concept art seems to show a more dilapidated and worn out version of the map. Looking at the final screenshots, it seems like this direction was tapered back a little bit resulting in a more traditional look and feel for the map. It would have helped make the map feel more war-torn and destroyed though, so either way fans probably would have been happy. When you’re updating such a loved experience though, it is probably better to side with the past.

Other bits of information can be gleamed from the screenshots. For one, we get a look at the Halo 2 Anniversary Edition version of the Warthog. Fans have pointed out that 343 Industries seems to have stuck with the Warthog design from Halo 4. Halo 2 and its multiplayer took place long before the events of Halo 4, so the Warthog featured a much different design in the original game. This could easily just be a placeholder model though, so we’ll have to wait until the game gets closer to release to find out how the vehicle designs ultimately turn out.

Zanzibar joins other maps Ascension and Coagulation as the three confirmed for the remastering treatment. Three more maps have yet to be revealed, with Lockout being a strong contender for a spot. During our speculation article we proposed that the final three would be Lockout, Ivory Tower, and Sanctuary, with Midship possibly taking one of their place. Halo 2 was chock full of great maps though, so almost any choice will be good for fans. I would also be happy to see Turf and Terminal make a comeback.

Halo: The Master Chief Collection will be released exclusively for Xbox One on November 11th.