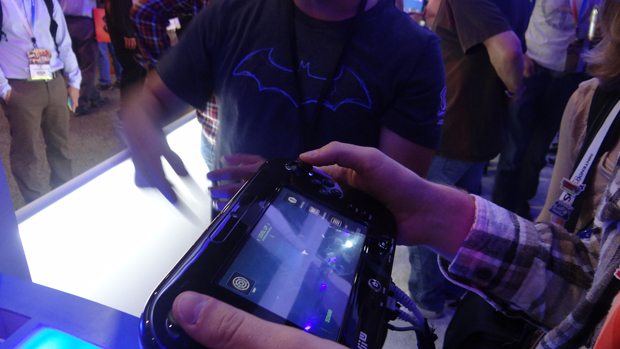 Microsoft didn’t have any new hardware at E3 2012, but they might as well should have.  One of their big reveals at E3 was on the software side, with Smart Glass.  It stole some of Nintendo’s thunder at the expo, but Nintendo doesn’t beleive that Smart Glass can compete with their Wii U.

In a recent statement by Satoru Iwata following E3 2012, the Nintendo executive elaborated.

“One thing that I can say is that previously, after we’d introduced motion control, it tool the other companies about three years before they introduced their own style of motion control.  This time, the fact is that we’ve seen something of this nature come out within a one-year time frame from when we first announced the Wii U.  That suggests to me that they clearly see value in what we’re trying to do,” Iwata stated.

“So the fact that we have so quickly seen somebody following in the footsteps of what we first introduced with the Wii U, suggests that there are people who see great appeal in what we’re offering. I think that’s proof of that.”

“We know that the core users who love playing video games like controllers that you hold with two hands. But what you don’t have on smartphones and tablets are the buttons and the control sticks that they prefer to use. Now, if they could hold a controller with two hands and hold a tablet or a smartphone with another hand, there would be no issue. Unfortunately, since it is not possible for humans to do that, you can’t play a game in a way you can play with the Wii U. The other thing that’s important to know is that with the Wii U GamePad we have paid particular attention to the latency (the time to be spent for wireless communication between the Wii U system and the Wii U GamePad) issues to allow the Wii U to truly create seamless gaming experiences on the Wii U GamePad. What that means is that when the user presses the button on the Wii U GamePad, the signal of the button processes a transmitter to the Wii U hardware, and the Wii U hardware draws graphics in reaction to the signal received from the Wii U GamePad and transmits those graphics back to the screen in the Wii U GamePad. If you have latency within that process, or lag within that process, it’s no longer a quality game.”

“If you were just talking about streaming movies, there would be no issues because there would be no interactive development for that. The moment that you look at an interactive experience, people become very sensitive to the lag and the latency, so that’s the reason why we thought it would be meaningful to create the Wii U GamePad. The advantage of the Wii U system and the Wii U GamePad bundled together is to ensure that everyone will have the same experiences. I believe that even if Microsoft is able to bring SmartGlass to their console or if, according to the Sony story, the company is able to connect two different consoles, the advantage that we see in the Wii U will not be taken away.”