Nintendo Takes Down Mario Project in Dreams Due to Copyrighted Material 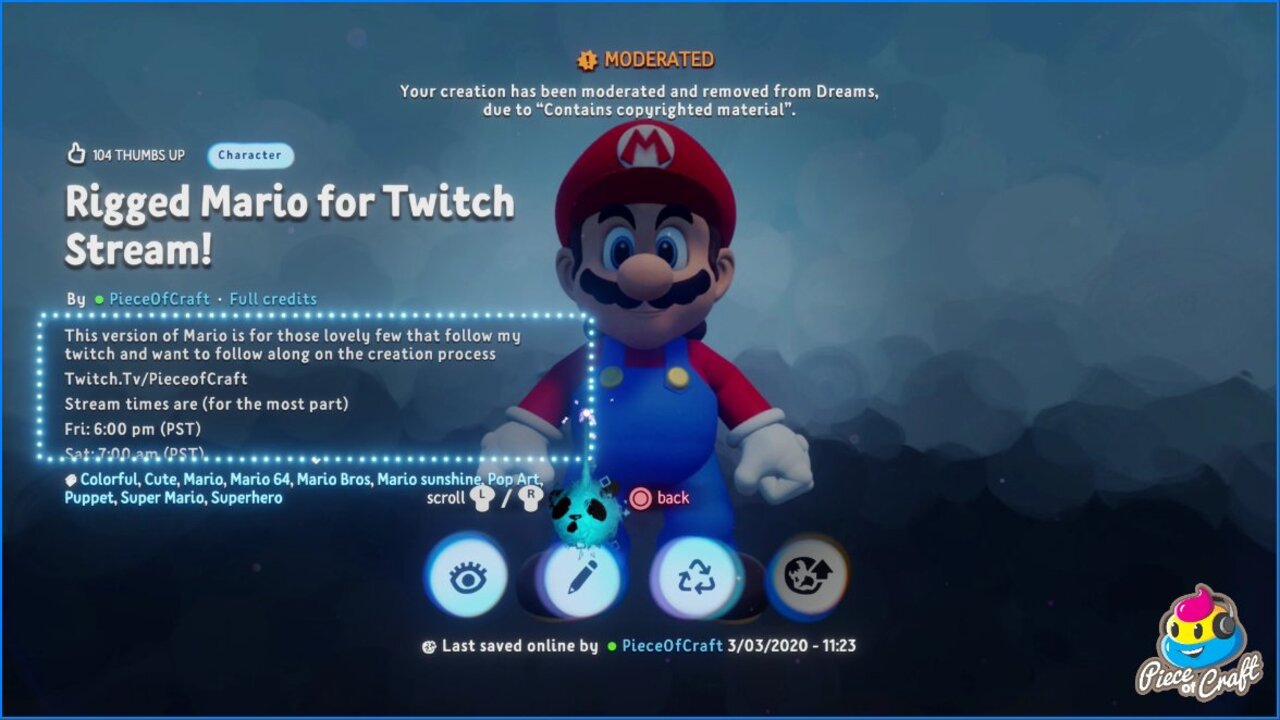 Media Molecule’s Dreams offers a nearly limitless platform for creative expression, and tons of players have been recreating some of their favorite video game characters and levels since the game launched last month. Several popular characters, from Mario to Donkey Kong, have popped up in Dreams, and Nintendo is apparently not too happy about that.

A Mario creation in Dreams titled “Rigged Mario for Twitch Stream” has been removed from the game due to copyrighted material. The creator, Piece_of_Craft, states that he received an email regarding the takedown that cited Nintendo as the company that filed the complaint.

Good news and bad news
We flew too close to the sun boys! A big video game company who i will keep nameless obviously didn't read my "be cool" note in dreams
no worries though have a back up plan. But for now Mario projects in dreams are on hold until i put said plan into effect pic.twitter.com/ifGDM0jFZ3

The subject of copyright has been a hot topic in the Dreams community since the game’s release. Technically, copyrighted content is not allowed on Dreams, but that hasn’t stopped the community from recreating their favorite copyrighted material using the game’s expansive creation toolset. Everything from character models of classic Nintendo characters to full-blown recreations of things like P.T. has popped up on Dreams, with some of these projects amassing large amounts of popularity within the Dreams community.

Speaking to VG247 in an interview last October, Media Molecule stated that it was happy to see players using their tools to recreate their favorite games, but that creators should expect any infringing material to be taken down in the long run. “I think it’s natural for people to start out by trying to remake things,” said Liam de Valmency, senior principle programming for Dreams. “But if you’re making IP stuff, it might disappear at some point. Our general policy is that if IP owners ask us to take something down, we will.”

As of right now, Piece_of_Craft’s Mario creation is the only Dreams project to have been taken down by Nintendo, but more could very well be removed in the near future considering how protective Nintendo can be of their IP.