Nobody Is Playing Evolve On Steam Right Now 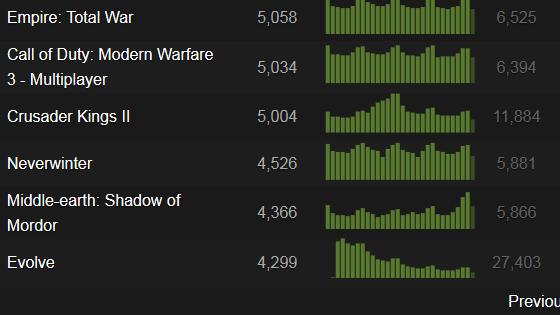 A month after Evolve has been released, the number of people playing the game has been dropping rapidly on Steam.

As reported by Pixel Gate, the last 30 days have not been too kind on Evolve. Data on Steam shows that the number of players currently playing the game has been dropping.

As of March 9th, 2015, Evolve is at number 50 on Steam’s most played video games list. As you can see from the image above, even a lot of older games have more players. It looks like players were only playing the game for a short while, and have lost interest completely as time goes by.

The main problem about Evolve for gamers is its lack of content. The game doesn’t have a single player campaign, and the multiplayer aspect of the game is quite bare. Not to mention a lot of content is not available unless you pay extra for DLC.

This is a similar problem Titanfall had when it came out last year. The PC version had no players after just two weeks as people couldn’t find any games to join.

On the plus side, Evolve’s maps will all be free for players. Maybe Steam gamers are waiting until more maps are released.