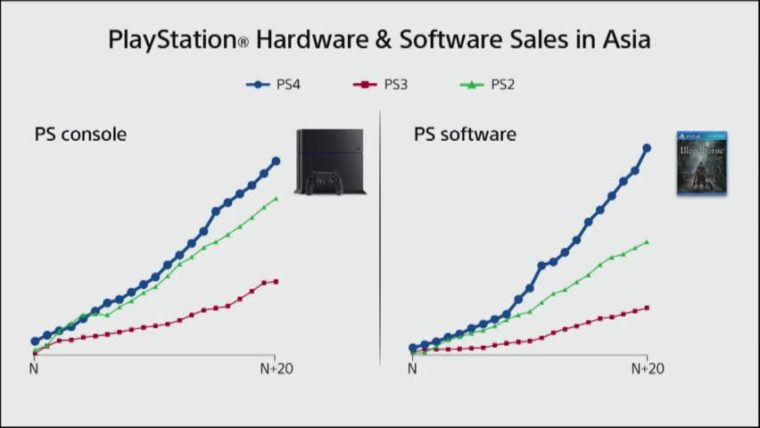 Asian markets seem to love the PS4 console and its games as they are selling at a faster rate than the PS2 generation.

Sony Asia’s Press Conference showed the above graph (via NeoGAF) showcasing how popular both PS4 hardware and software is in Asia compared to the PS2 and PS3 generations.

As you can see from the graphs, the PS4 console and its games are selling very well in the Asian markets. The PS2 is the best selling games console of all time, so it will be interesting to see how well the PS4 does during its lifetime.

The line in red represents the poor PS3 console and games. Sony misfired the launch of that console thanks to a high price tag. The company managed to bounce back later in the generation, although many people had purchased the Wii and Xbox 360 consoles instead.

A slight advantage the PS4 has right now is that it’s being sold in China. China banned video game consoles since the year 2000, although they uplifted this ban earlier this year.

This Holiday season is sure to be a busy time with many more games on the way. 2016 is also going to be busy with numerous AAA first-party PS4 games getting released too.