This patch fixes many issues with Taego, nerfs some weapons, and adds a new "spray" feature. 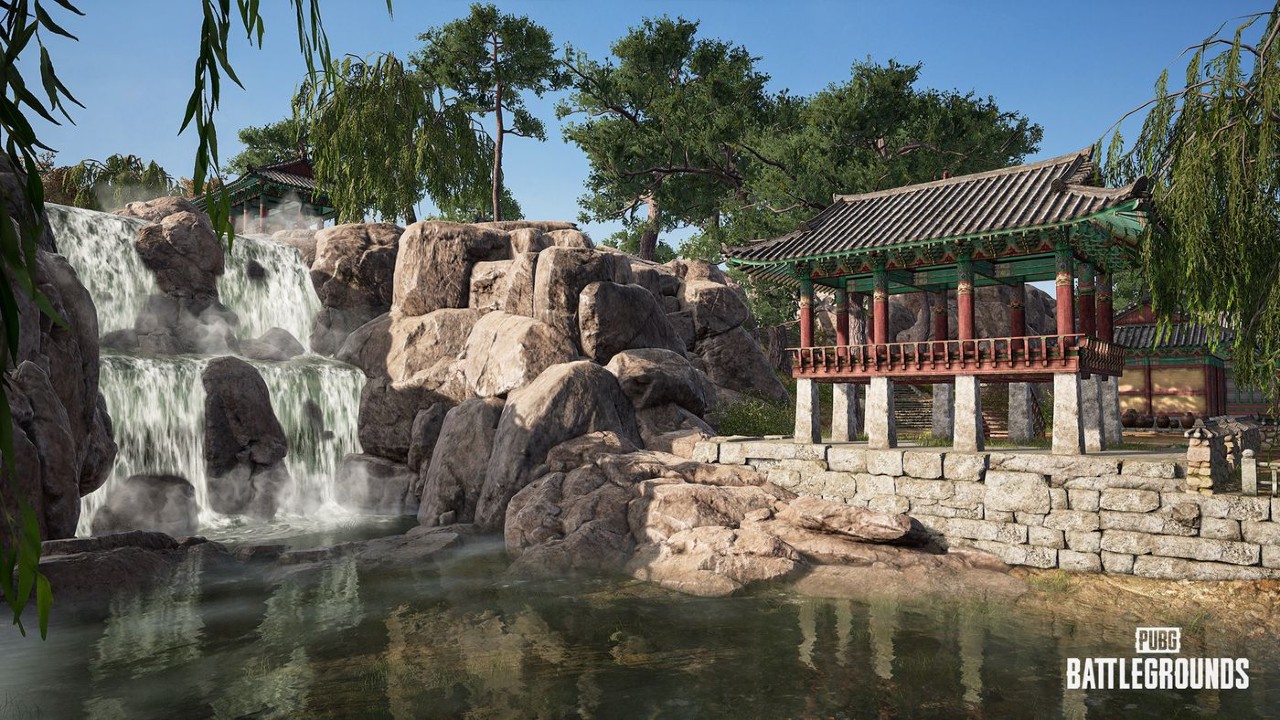 Update 13.1 has released for PUBG, and we’ve got the full list of patch notes here. There is a lot to cover and the changes are quite extensive. The update mostly addresses the recent 12.2 update which added the new map Taego, fixing many of the issues that have been garnering criticism from players. This includes increasing the rate air drops and item spawn rates, adding objects to some otherwise empty areas of the map, and spicing up the initial plane ride at the start of each match. Outside of the map upgrades, changes have been made to the ranked rewards system, and some things have been changed about ranked play for the upcoming Ranked Season 13. Numerous weapons have been nerfed, as well as their rarity shifted, a “spray” feature has been added, and some small bugs have also been fixed. This update is available now for PC players, but console players will have to wait a few days.

The following update 13.1 patch notes are taken directly from the official PUBG website.

Having to wait at the Starting Island then flying off the plane every match, could have been a bit boring by now. Now, in order not to feel the tension from the start of the match, there is a certain probability that the engine of the plane you are boarding will explode at the start of the game to make an Emergency Landing. Feel the different play experience in this process!

From your feedback, we found the need to adjust the spawn rate of items and made the following changes. In particular, there were many requests for an increase in the new item, the Self AED, which we made a great increase.

Sanhok was originally released in 2018 and was remastered in 2020. We didn’t stop there and gave Sanhok additional changes. In particular, based on the feedback received after the remaster, we improved the movement flow in specific areas and added cover to enable various tactics.

There were no objects on the coast from west to north in the South Ruins connection area. In addition, when moving to the northwest island, players had no choice but to cross the water without going through the bridge, and to move to the outskirts of the island, they had no choice but to cross the water by engaging with enemies in the stones or avoiding them. In addition, there were no cover for players moving across the shore so we decided to make some improvements.

Since Ranked Season 11, additional focus was placed on your most recent Ranked achievements, with honor-based rewards such as nameplates and emblems now only available to display for the duration of the new season.

We hope this encourages players to continue their ranked progression while also adding a little more prestige to those hard-earned rewards each season. Ranked in-game cosmetics, such as parachute skins, etc., will remain available to use throughout all seasons.

Players who reach the highest ranks will receive additional rewards, such as animated nameplates and emblems to make the grind just a little sweeter.

Ranked rewards are granted based on your rank at season end. Players who reach at least Gold V will receive the Season 12 Ranked Parachute skin! Those who fight their way to Platinum or higher will also be rewarded with a unique Animated Emblem. Master or higher players will also receive an Animated Nameplate.

Finally, view all your Season 12 Rankedstats by checking out the STATS screen under the CAREER tab in-game once the season wraps up.

HOW WILL MY REWARDS BE DELIVERED?

In Ranked Mode, players who in  Diamond rank or higher will begin to suffer daily decay of their RP if they go a 7 days without playing a single Ranked match. Previously this decay would stop at 3000 RP, allowing players to maintain at least the lowest level of Diamond ranking no matter how long they stopped playing for. In season 13, this decay will only stop once a player falls out of Diamond and in to Platinum. The purpose of Ranked is to check and improve your skills by constantly competing with others, even if you lose and your RP. Reaching a high tier and obtaining rewards without participating in Ranked is far against the intention of Ranked, which is why we came up with this decision.

As a battle royale game where every match presents different situations, we believe each weapon category should have its purpose in certain types of encounters. When checking our data, we found DMRs to be overperforming at long to very long ranges. However, at very long distances you would expect SRs to have an advantage. These balance changes should make SRs more viable than before – especially for engagements at very long distances.

Alongside buffs to SRs, including improved bolting animation and transition speeds,  certain ARs and the PP-Bizon receive recoil reductions or an increase in damage.

Read below for full details.

The ballistics of the following Sniper Rifles have been adjusted (buffed):

Some mechanics of the following Sniper Rifles have been adjusted (buffed):

The following changes have been applied toe DMRs:

The QBZ and G36C’s effectiveness was falling off too hard on medium to long range fights when compared to other ARs.

The DP28 was lacking in the DPS department in close range fights, and our data showed that the M249 could use a little help with control for medium to long range encounters.

The PP-19 Bizon, having the lowest DPS of all SMGs, was doing okay in terms of KDR at medium to long range fights, but was suffering more than we had hoped for at close distances.

Introducing the new spray feature! You can spray on the ground, building walls during the match. Express your emotions through various sprays!

We have improved the match results page to maximize your chicken dinner experience. In order to differentiate the experience of the difference between winning and not winning, the winning screen does not display the result screen immediately at the end of the match, but enters the celebration phase after the WWCD moves are performed. If you exit with the celebration end key, the result screen will appear. Try to get your chicken dinner now and experience the improved match results screen!

You can quickly and easily check the stats of your teammates without having to open the match report after the match is over. In addition, we made it possible to add friends right after the match, and you can have fun by decorating and showing off your avatar and nameplates.

If you are engaged in frantic battles with enemies during a match, it is very confusing to distinguish what happened. We have improved the way kill messages are displayed in this update.

The distance that can be used with the Quick Marker has been increased, and it can be used in places farther away than before.

Increased the number of maximum Waypoints from the previous four to six.

There are “Auto Equip Attachments with Interaction Key” and “Auto Equip Attachments from Inventory” options in the Settings. If either option is active, attachment items are automatically attached to the equipped gun when acquired by pressing the interaction key. (But, it is only attached when the attachment slot of the gun is empty.) This didn’t work when the inventory is full. Now, we have improved the ability to automatically mount attachments by pressing the interaction key even if the inventory is full when all of the conditions below are met.

The community has been saying that the icons for item acquisition notifications and event notification messages looked very much alike. We have clearly differentiated the icons to reduce confusion.

Sales period is subject to change.

The replay system has been updated. Replay files from previous updates are now unable to be used.

PUBG is available to play today on PC, Xbox, PlayStation, and mobile.