Razer is Bringing Multi-Monitor to Gaming Laptops With Project Valerie

The latest news in the world of video games at Attack of the Fanboy
January 5th, 2017 by William Schwartz 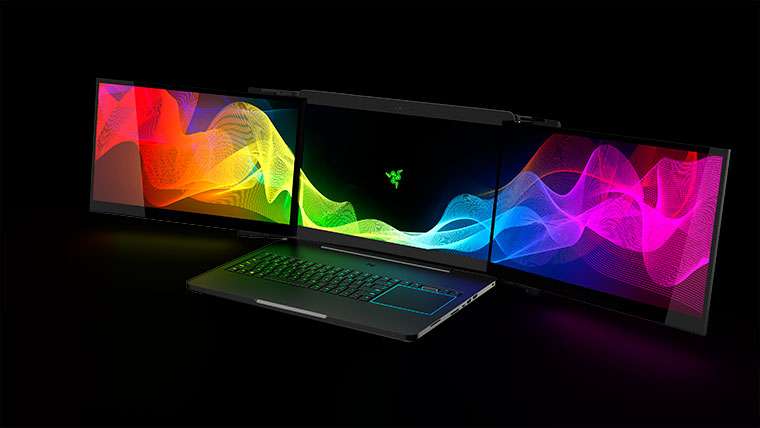 Today marks the opening of the Consumer Electronics Show in Las Vegas, and while gaming news is usually pretty slim at the convention, Razer has unveiled a new project they’ve been working on.  Project Valerie is the world’s first portable multi-monitor gaming laptop.

The lap features three built-in monitors that measure 17.3 inches with 4K Displays and G-Sync Technology.  They claim that this is “the greatest amount of screen real estate ever assembled in a single computer,” via their press release for the concept reveal.

The displays slide out of the main display for the laptop, mechanically.  All of the multi-monitor support is integrated into the device, so there’s no cable clutter when using the computer.  Anyone with a multi-monitor set-up feels that pain.  As far as form factor goes, apparently Razer is saying that this device will feature the same heat management as other laptops in their line of products, and will feature a unibody CNC aluminum chasis that measures 1.5-inches thick, weighing less than 12lbs.

In terms of power, the Project Valerie prototype is powered by an NVIDIA GeForce 1080 graphics card, which makes it ideal for those wanting the best performance from both traditional games or virtual reality via HTC or Oculus.

Historically, Razer gaming laptops haven’t been on the cheap side and Project Valerie will likely be for the extreme enthusiast with plenty of disposable income.  Their cheapest gaming laptop at the moment is the Razer Blade Stealth, which starts at $899.  The Razer Blade Pro can be found going for around $3700.  Add in those extra 4K screens and mechanical tech, this could be a pricey device to own once it hits store shelves.