The latest news in the world of video games at Attack of the Fanboy
July 12th, 2017 by Jelani James 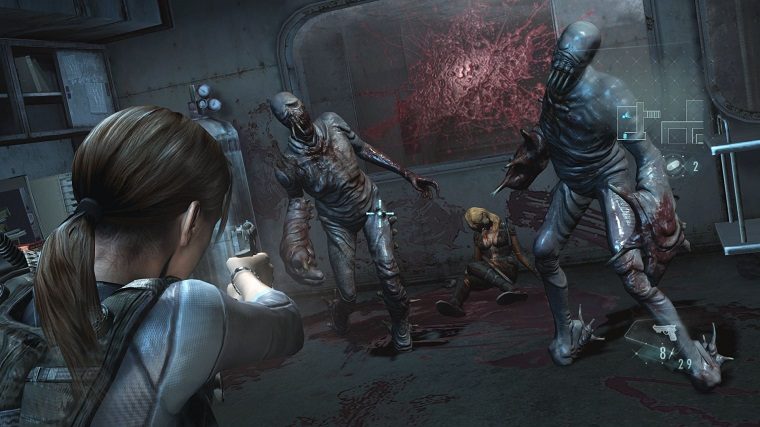 Capcom has announced that Resident Evil: Revelations will be arriving on the PlayStation 4 and Xbox One in North America on August 31 for $19.99.

Released for prevous-gen consoles in 2012, PlayStation Resident Evil: Revelations tells the intertwining stories of Jill Valentine and Chris Redfield between Resident Evil 4 and Resident Evil 5, depicting the events that took place shortly after the establishment of the counter-terrorism group BSAA. The game is split into two main sections: controlling Jill and Parker Luciani (her new partner) as they search for Chris and Jessica Sherawat (his new partner) at their last known location, the a cruise ship called the Queen Zenobia, and controlling Chris and Jessica as they make their way to the Zenobia (its a major plot point). Jill’s part plays more like a traditional Resident Evil, while Chris’ section is reminiscent of the action-oriented gameplay popularized by Resident Evil 5. Throughout the game players will encounter murder, intrigue and an overwhelming amount of horrifying creatures.

Since this game was for older consoles, Capcom took the time to update the graphics to match the power of the PS4 and Xbox One, setting the game at a resolution of 1080p. Those who played the original should immediately recognize the increased environmental detail and refined creature movements, which Capcom says will “add a whole new dimension to the terror.”

If getting what is essentially a remastered version of Resident Evil: Revelations for $19.99 wasn’t enough, Capcom decided to include all the DLC for Raid Mode for no extra cost. As such, both weapon packs and all the downloadable costumes will be available right out of the gate.

Here’s a rundown of what the DLC contains:

With Capcom showing clear interest in its Revelations series, along with previous mentions of a new Resident Evil in the works, it would be great if that project turns out to be Revelations 3. If it does, then maybe it could feature characters that fans haven’t seen in a while (like what Capcom did with Revelations 2), such as Rebecca Chambers or Carlos Oliveira.