The latest news in the world of video games at Attack of the Fanboy
March 30th, 2016 by Scott Grill 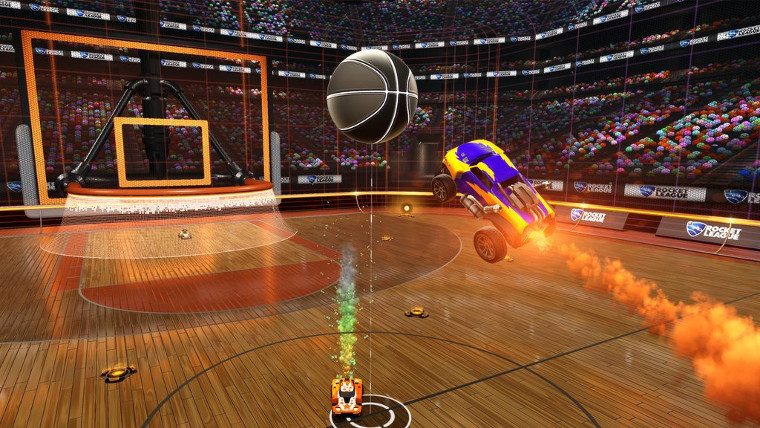 The wildly successful Rocket League is bringing another mashup between its rocket-powered cars and sport featuring a round ball soon. Pysonix announced Tuesday that the new “Dunk House” basketball mode is coming in April.

“Break some axles in the Dunk House this April! #RocketLeagueHoops,” the studio revealed on Twitter.

The accompanying animated gif shows a new Rocket League arena made up like a basketball court. This comes complete with a giant backboard replacing the goal with a rim raised off the floor for players to attempt to get the ball in. Obviously, this changes the playstyle up dramatically as players are tasked with getting the ball up in the air every time to score.

The “Snow Day” hockey mode proved to be popular enough for Psyonic to bring back permanently. “Dunk House” will just miss out any boost from March Madness, but basketball is still going strong and more variation’s to the base Rocket League play style is always welcome.

Pysonix told GameSpot in an interview it already has everything figured out. The only hold up left is the politics of allowing PS4 and Xbox One players to come together.