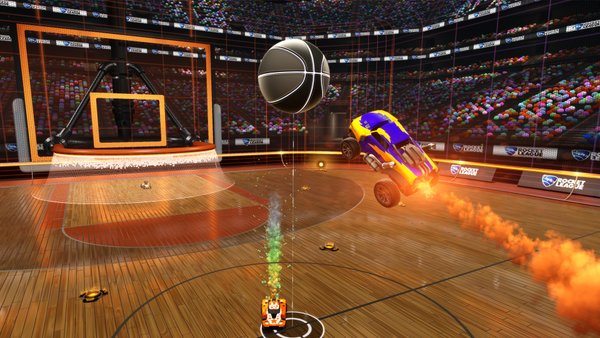 At long last, the basketball mode for Rocket League is due to be out this week. Psyonix has now revealed the new 1.17 update patch notes for the game.

All of the patch notes for Rocket League were revealed via the game’s official website. Several other fixes have been made aside from just the addition of the basketball mode. The main points can be seen below.

General updates: The “Hoops” 2v2 mode has been added as an unranked playlist, and is also available in Private Matches and Exhibition mode at any team size.

Exhibition and Private Match now have a “Game Mode” selector. The mode you select determines which maps you can choose – for instance, “Hoops” can only be played on the “Dunk House” map.

During Overtime, the in-game UI clock now counts upwards to indicate how long the overtime has lasted, New “Cosmic” Arena has been added to the “Rocket Labs” playlist and After scoring in Free Play, there will no longer be a 3/2/1 countdown”

For a full rundown of the Rocket League patch notes, you can see them in full by clicking here. The update patch itself rolls out today on PC, PS4 and Xbox One.