Update: Rumor: Monster Hunter 4 Could Be Coming To Wii U

The latest news in the world of video games at Attack of the Fanboy
September 13th, 2014 by Damian Seeto 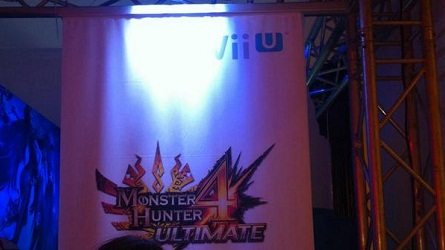 A few pictures taken from the Connichi (an anime convention in Germany) shows an interesting banner for Monster Hunter 4 coming to Wii U.

Twitter user “Tony” took two pictures showing the banner of Monster Hunter 4 with the Wii U logo displayed on the corner. You can view the pictures by clicking here and here. A NeoGAF user also posted up a photo. His picture of the banner is not so clear, but you can see from behind the Wii U logo is still there.

The game is actually the “Ultimate” version of Monster Hunter 4. The game has only been released for the Nintendo 3DS in Japan so far. Western gamers will not get the 3DS version until early 2015. A Wii U version would be awesome if this turns out to be true. Hopefully either Nintendo and/or Capcom makes a surprise announcement at TGS for the game later this month.

Update: Capcom confirmed the banner shown was a “misprint”. The game is still for the 3DS only at this time.

Home / Game News / Update: Rumor: Monster Hunter 4 Could Be Coming To Wii U