The latest news in the world of video games at Attack of the Fanboy
September 6th, 2014 by Danny Vittore 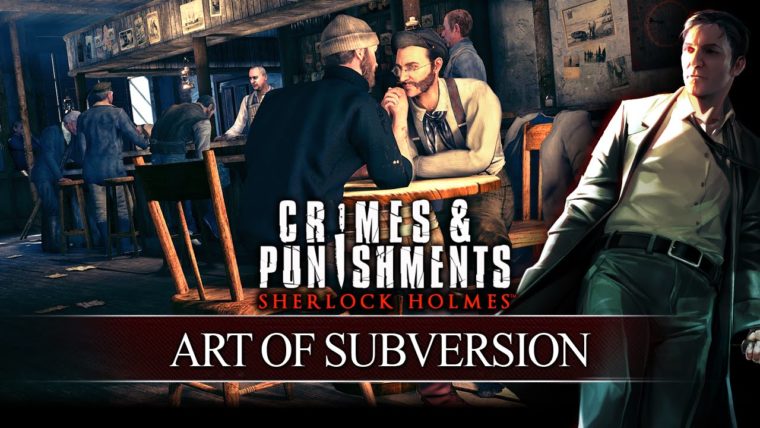 We recently brought you a quick look at the interrogation aspect of gameplay for the upcoming Crimes and Punishments: Sherlock Holmes game by Frogwares. In it, we took a look at all the information and gameplay footage about interrogating suspects. However, sometimes, as a world class detective, you need to gather additional information. Unfortunately, as a world class detective, people don’t always just open up and give you their life stories. You need to pry it open with a clever use of subversion.

We’ve seen aspects of this part of gameplay in our analysis of the original gameplay trailer a few weeks back, when Holmes was allowed to pick his outfit before going out. Back then, not much was seen of it since it appeared more of an aesthetic thing then gameplay related. However, it now appears that the outfit you pick for Holmes will affect the conversations you initiate. It is not entirely clear how thorough this feature is implemented. For example, if you dressed up as something ridiculous, would people call you out on it? In the trailer, Holmes dressed up as a sailor (paired with hilarious, obviously fake Franz Josef facial hair) in order to befriend and get information from a sailor at a pub. How does one befriend a sailor at a pub? Arm-wrestle them (a mini-game), win their money and buy them a drink with that money. Congratulations, you now have a new friend and now a source of valuable information.

One slight worrying thing about this is that it seems Sherlock internally monologues about the idea of wearing a sailor’s costume to give the player the idea. It would be okay if dressing up was optional, but I wonder if it really is. Would the game keep you on rails and force you to dress up in order to continue or will it let you (potentially) blunder through? It will be interesting to see. However, one thing for sure is that there are many aspects to an investigation in Crimes and Punishments: Sherlock Holmes.

Crimes and Punishments: Sherlock Holmes is planned for release on the September 30th for PC, Xbox One, Xbox 360, PS4 and PS3.

Are you looking forward to Crimes and Punishments: Sherlock Holmes? Tell us what you think in the comments below!