The latest news in the world of video games at Attack of the Fanboy
January 10th, 2017 by Jose Belmonte 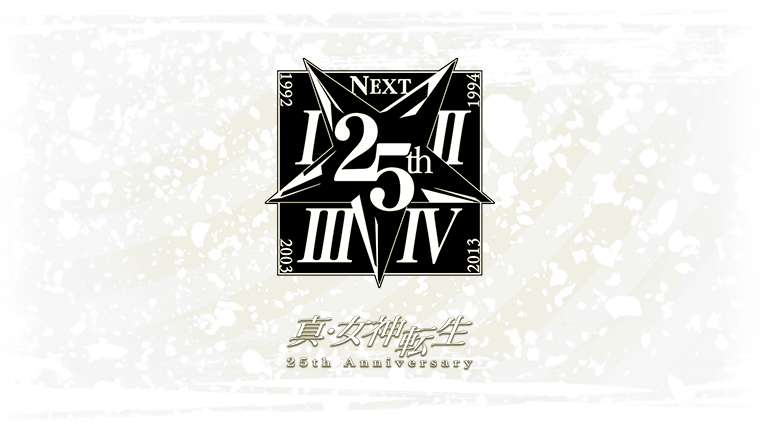 Atlus has launched the official website of the 25th Anniversary event of its iconic series Shin Megami Tensei. For now the site only features the logo of the event and links to their renewed social media pages, but fans have started speculating that there seems to be some hidden information in the image.

The logo is formed by a black square with references to the four main entries of the franchise and their year of release in each of its corners. The years 1992 and 1994 reference the release of Shin Megami Tensei and SMT II on Super Nintendo, 2003 refers to the arrival of SMT III: Nocturne on PlayStation 2, and 2013 is the year that SMT IV was launched on Nintendo 3DS.

What is not so obvious is the meaning of the five-pointed star that is placed in front of the logo. It contains the numbers 25, referencing the anniversary, but what it’s interesting is the fact that the figure is placed upside-down, making the lowest part simulate the form of a “V”, the Roman number 5. Another clue is that alongside the numbers of the previous entries we find the word “NEXT,” which seems to be teasing an upcoming announcement of Shin Megami Tensei V.

We should also not underestimate the timing of this launch, which happens in the same week that Nintendo is expected to hold a presentation of more details on their next generation console, Nintendo Switch. Considering that the two previous entries of the series, SMT IV and its sequel SMT IV Apocalypse, were released on Nintendo 3DS, we would not be surprised if Atlus announced their next title for the new console.