The latest news in the world of video games at Attack of the Fanboy
March 15th, 2017 by Jose Belmonte 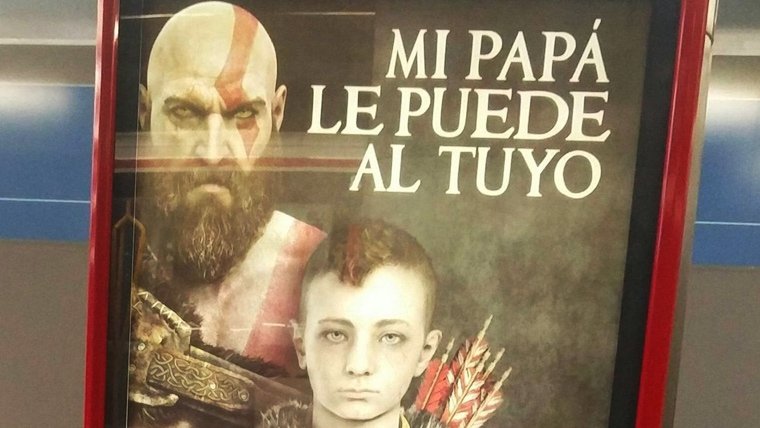 Promotional posters of the upcoming God of War game for PlayStation 4 have started appearing in the Spanish city of Madrid, becoming the first official promotional move that Sony has made of the game to a general audience outside of game events. The fact that Sony is pushing the title so early could suggest that the release of the game could be closer than expected.

The posters present an image of an older Kratos and his son Atreus, and feature the tagline “Mi papá le puede al tuyo” which would be loosely translated into English as “My dad is stronger than yours.” The campaign is taking advantage of the upcoming Father’s Day festivity, which in Spain is celebrated this Sunday, March 19th.

The posters were instantly recognized by fans who saw them when they entered one of the city’s subway stations, and they started sharing pictures of them on Twitter and other social media.

People praised the campaign’s perfect timing and how well it matched the theme of father-son bonds in the game with the celebration of Father’s Day. Below the title of the game, it can be read “Happy Father’s Day.” While no release date is mentioned, the fact that Sony feels confident in targeting the general public at this point probably means that the game will not take too long now to be launched, and we could definitely expect it to arrive during this year 2017.

The new God of War was presented during last year’s E3, and if the title does release during this year, we should definitely expect a much more detailed look during this year’s conference. The new entry represents a sort of reboot and sequel to the original series, with Kratos living in the Northern regions of Europe with his young son, Atreus. During the first trailer released, Kratos taught his son how to hunt and survive in a world populated by creatures taken from the Norse mythology.