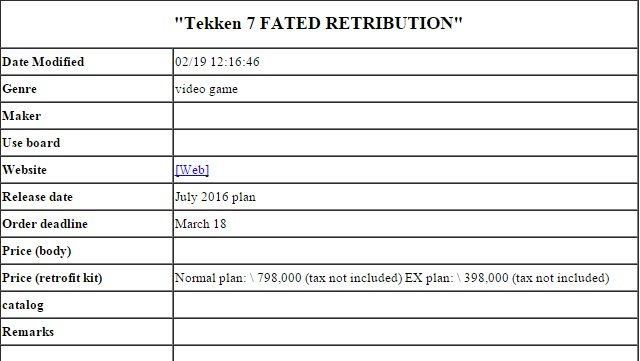 Tekken 7: Fated Retribution will be out in July 2016 in Japanese arcades. There is a chance this updated version of the game might be out in time for EVO 2016.

This news is according to Japanese arcade game website, AM-Net. The website put up a listing that the planned release date for Tekken 7: Fated Retribution is in July 2016. Arcade places in Japan have until March 18th, 2016 to set their orders in for the new machines.

Fated Retribution is an updated version to the arcade original. This version of the game includes new characters such as Akuma, Nina and more. It also adds new moves and a more balanced combat system.

The July release could mean that Bandai Namco is planning to have these out in time for EVO 2016. EVO 2016 is the biggest fighting video games tournament in the world. Having Fated Retribution at the event would be a big drawcard for both fans and competitors.

With Tekken 7: Fated Retribution out in July 2016, this could mean it will be a longer wait for the console versions to arrive. Many people were hoping the game would be out in late 2016 for consoles, but this new piece of news might suggest otherwise.