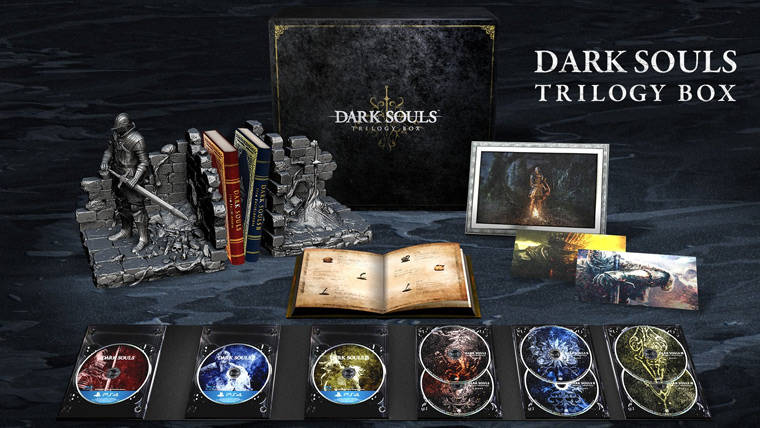 Alongside the new Dark Souls Remastered for PS4, Xbox One, Nintendo Switch, and PC, From Software has announced in Japan a compilation of the three games in the series in a very special edition for PS4. The set includes the game discs of Dark Souls Remastered, Dark Souls II: Scholar of the First Sin, and Dark Souls III The Fire Fades Edition in a beautiful package imitating an old book, in which we also find the soundtrack of the games in 2 discs for each entry. But the stand out of the set are the two bookends with the figure of a warrior, which can be either set to hold items or combine as a full sculpture of the warrior looking at a fire.

Also included are an Item Encyclopedia book containing information about every item in the franchise, their story and function, and Memorial Art Set, with artwork from the series.

This is a beautiful collector’s item that will delight the biggest fans of the series, although considering the high price announced for the Japanese version, it will not appeal to those who simply want to get started on the series with the most complete edition. The boxset will cost 49,800 yen, which is about $447 using a direct conversion.

So far, From Software has only announced the Trilogy Box for Japan, including the official website, but we’ll stay alert if the company makes some announcements regarding Western markets.