The Rise Of The Zombie Video Game 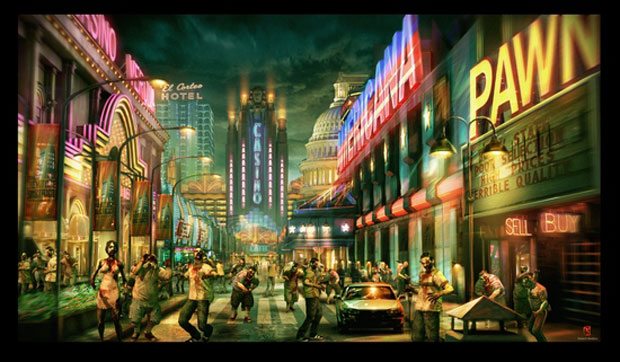 Zombies. The walking dead. The Infected. Whatever you want to call them they’re here, and they aren’t leaving until either they’ve devoured every single gamer and fanboy in the video game world or you’ve wrenched the decomposing head off of the long dead neck of the last zombie in cyber space.  The Zombie Video Game comes in a variety of shapes, sizes, colors, flavours and with differing accents. So, what’s driven their quest to infect the minds of gamers across the globe and why are we so keen to see the undead hordes on our streets?

For me, and for many of you fanboys out there, the tradition of shooting zombies and avoiding their flirtatious advances upon your grey matter started in 1996 with the release of Resident Evil. When Capcom brought this bad boy out,  it set the bar for how a survival horror game should feel. The atmosphere was defined by the static camera and the eerie shuffling of un-seen, un-dead feet just off sreen. The first cut scene of a zombie seen chowing down on a member of Bravo Team is iconic still today. The dialogue however, left a lot to be desired. Cheesey lines were punctuated throughout the storyline, with the main perpertrator being none other than my favourite support character from any game, Barry Burton. I have to say his name in that deep American accent used in the game. It’s the law. Now the zombies within Resident Evil are shamblers. They are slow, menacing and deadly in groups. But hey, it’s ok. Unlock Chris Redfield’s Flamethrower or Jill Valentine’s Grenade Launcher and you’ll make mince meat out of them. The Resident Evil series has evolved it’s zombies over the years, with them becoming ever more menacing throughout the franchise. The howls and cries heard in the distance in Resident Evil 2 could be genuinely terrifying, especially to the 14 year old me, playing the game alone at night when I had to go through a set of woods on my paper round the next morning. Thank you Capcom for literally scaring me into delivering those peoples morning newspapers as fast as my chubby adolescent legs could take me. 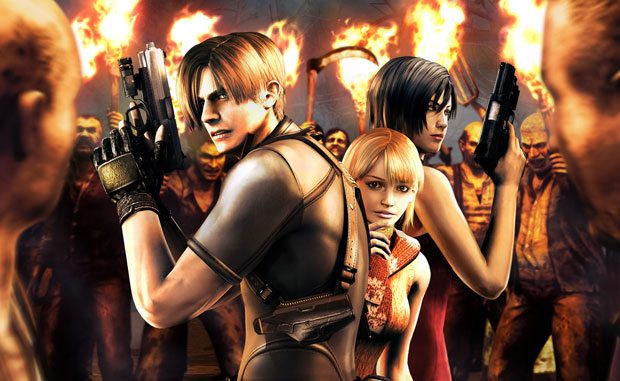 Before Resident Evil, Zombie games were mainly based on the old Spectrum’s, Atari’s and Commodore 64’s with titles such as The Evil Dead (Based on the Films), Zombie Zombie and Horror zombies from the crypt. What titles like Resident Evil and the arcade shooter, House of the Dead, did was bring them into the mainstream. Zombie movies had amassed a large cult following, myself included, I own all George A Romeo’s “Of the Dead” films, plus many many more good, bad and ugly Zombie moves, and the games injected life into the sleeping monster…mwahaha! IT’S ALIVE!

Fast forward to 2000, and a mass of Zombie games were starting to appear on all the major platforms, with a notable title being the re-animated Evil Dead games, with Ash, voice by Bruce “The Chin” Campbell, hacking and slashing his way thrugh deadites with his chaisaw hand and boomstick. The graphics were good for the time, the gameplay fun and the original game, Hail to the King spawned two sequels. There was also Return to Castle Wolfenstein, The OneChanbra series and then a series which used to really annoy me, the Hunter: The Reckoning series. I owned the original on the Xbox, and it was meant to be a frantic hack, slash and shoot at hordes and hordes of zombies. This was a good aspect to the game, with the screen being filled with masses zombies of all manner at any one time, an it had four player co-operative play. But, and it’s a big but, it had the original Resident Evil fixed screen approach, with only a very small ‘killing zone’ on view. It didn’t go split screen for co-op mode, it kept you all on the same screen, causing arguements aplenty between me, my brother and our friends as we were all trying to go seperate ways to try and kill dead heads. So that was it’s flaws. Plus, the story of a rave bringing back an executed serial killer and opening a portal into hell… Not really the best. Zombies also went comical during this period of gamig, with the release of Stubbs the Zombie: Rebel Without a pulse, putting you in charge of a trilby wearing zombie, with the aim of the game being create an undead army and destroy the city built on top of your final resting ground. Stubbs caused contraversy in America, with worry over canibalism being portrayed as a fun pass time. One US Senator stated that “It’s just the worst kind of message to kids, and furthermore it can harm the entirety of America’s youth.” The rise of the zombie in gaming culture was taking a bite at modern life. 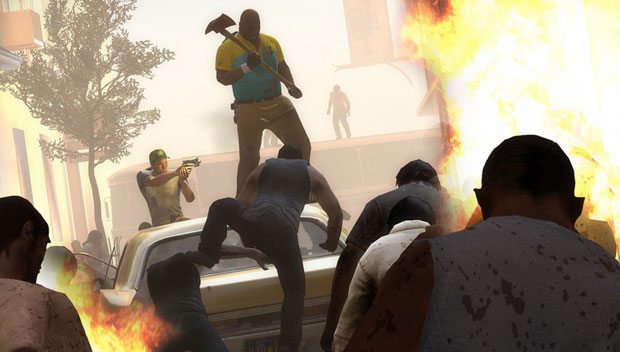 The next gen consoles however had the most dramatic effect upon the zombie folklore of the games world. With dratically ehanced gaming engines and massively improved graphics, the games developers jumped upon the chance to scare the crap out of gamers worldwide. stepping up to the plate, was Dead Rising on Xbox 360. With litterally hundreds of the undead on screen at once, their prescence was never far from you. These zombies were pack animals, hunting in massive groups, providing a barrier between you and that a important gun shop. Cue comical fights involving parasols, benches, iron pipes, chairs and literally anything yu oul throw at the buggers. The graphics were visceral. The threat level esalated to something gamers had never witnessed on any platform. Much like a ‘real’ zombie apocaypse, you had to have your wits about you. And a handy 12 gauge. This was then built upon with Left 4 Dead. But, something had changed. The zombies were no longer just shambolic, rotting corpses, advancing upon you at a nice, slow, managable pace. The rules had changed. They could run. Valve, obviously inspired by Danny Boyle’s “28 Days Later”, created a corpse with Usain Bolt sprinting skills. Gone was the tactic of pelting past groups of the undead. However, with the arsenal of weapons at your disposal in Left 4 Dead, your zombie hunter skills could be elevated to God like status. My friend Uganda (yes that’s the name he likes to go by!) and I have spent may a night in total pitch black, cigarettes slowly burning in tight lipped mouths as we traverse the apocalyptic city scapes infested with these howling, yipping, snarling, blood thirsty monsters. We’ve spent hours discussing the traps and pitfalls involved in a zombie holocaust as we run, M16 in hand, popping zombie heads like balloons on both Left 4 Dead games. As I am sure you have. The rise of the zombie in modern culture was complete. With the Resident Evil titles making the switch to the next gen consoles with the fantastic Resident Evil 5, a sequel to Dead Rising, so many add ons to already estabished games such as the COD5 WAW Nazi Zombies, the new Black Op’s Expansion, Red Dead Redemption Undead Nightmare, (Which I have to say is my personal favourite when it comes to Zombie add ons. Nothing beats tying up a zombie and dragging it behind you whilst you thunder away on a horse called war. Pure brilliance.) and even infection modes in games like Halo which can be frantic and foreboding in their own right, Zombies are now a massive part of gaming. We even have Zombie like monsters in outer space, wth the massively popular Dead Space series (A game which I have yet to play.) So, where next for the undead horde? A MMORPG would be cool. Band together in ‘clans’ and attempt to survive in a cold, dead world. Zombie avatars for the Xbox 360 would be a nice addition. There are already several Xbox Arcade games devoted to the ravenous undead and a  tower defence game on the PC called Plants vs Zombies which is one of my guilty pleasures. We have Max Brook’s “Zombie Survival Guide” books and numerous new, mainstream zombie films such as “Zombieland”. The march of the zombie in popular culture will only continue. Coincidentally, I am writing a Zombie Survival Horror serial, which can be found here. Good luck fanboys and Girls, now where’s my shotgun, it’s time to go huntin’.

Home / Game News / The Rise Of The Zombie Video Game