The Warframe Railjack Revamp is a Complete Overhaul, and It’s Coming Soon to a Star Chart Near You 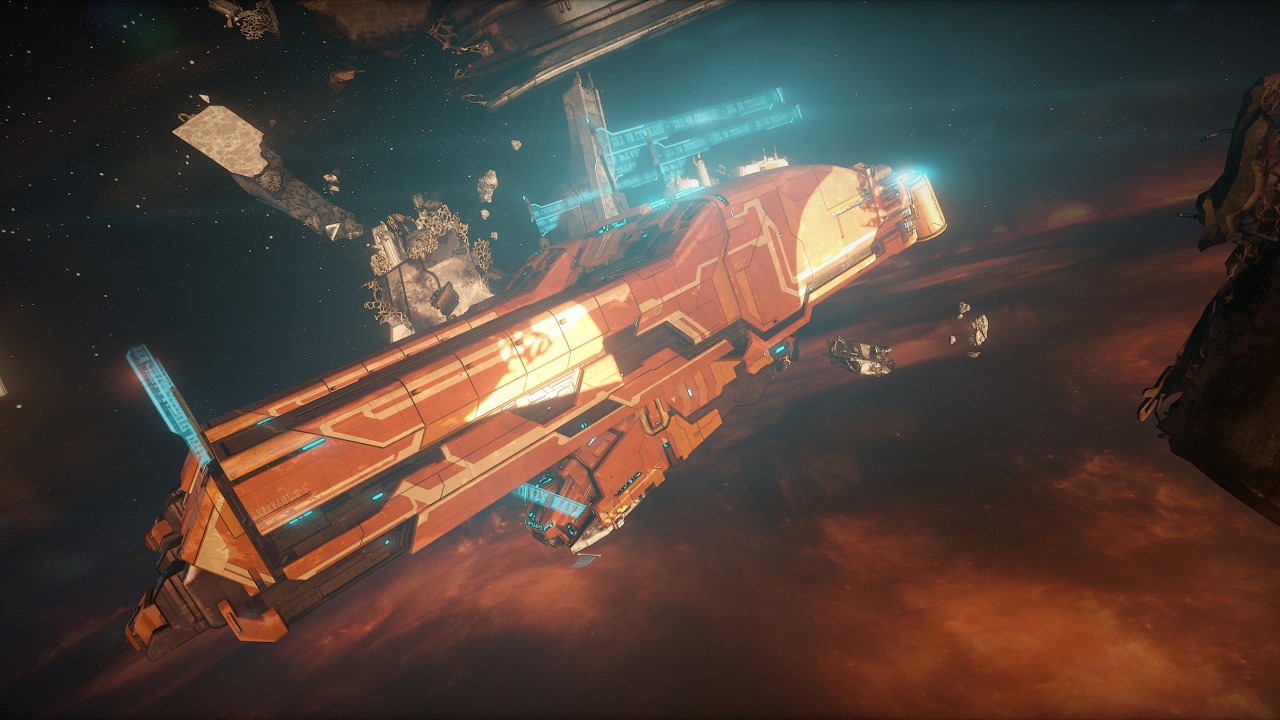 In a Dev Workshop posted on the official Warframe website and a video on YouTube hosted by Live Operations and Community Director Rebecca Ford, we learned more about the upcoming Warframe Railjack revamp that looks to flip the spaceship mode upside down. Well, as upside down as one can get in zero-gravity.

Railjack as it currently exists is a bit of a convoluted mess, and it’s not exactly the easiest mode to get into either. Neither should be issues once the Railjack revamp goes live in Warframe. First and foremost, the material and time required to craft your first Railjack are both being scaled back, and you can skip all of that if you so choose by purchasing a Railjack from the Market (400 Plat in the video; subject to change).

A lower barrier to entry is nice and all, but doesn’t mean much if the systems within Railjack remain difficult to parse. Enter the Plexus, a new interactable panel within the Orbiter. Avionics are gone, replaced by mods that are no different than those we already know and love. Interacting with the Plexus will bring up the new Railjack mod UI, where you can slot Railjack mods into one of three categories:

These mod slots will function much as the Avionics they are replacing (Battle are your Railjack abilities, for example), but there is one huge twist to the formula: your loadout follows you on every Railjack you visit. No longer will you have to play by the host’s playbook: what you have equipped will apply to the Railjack.

Since Avionics are gone, Dirac is being replaced with good ole’ Endo. Any Dirac you have on you when the Railjack Revamp drops will be converted into Endo, and any invested Dirac will be refunded as Endo. In short: it’s time to level our Railjack as we would our Warframes and weapons. 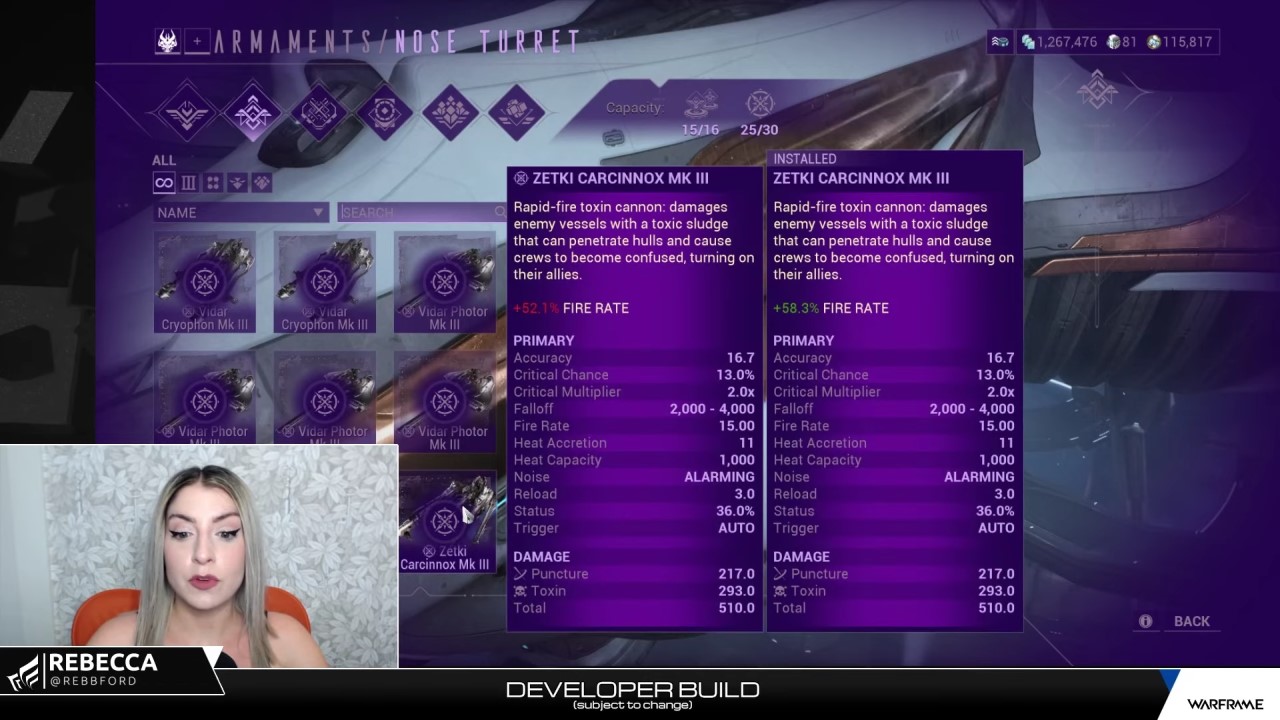 Intrinsics – Railjack’s talent-trees of a sort – will also receive a full revamp when the Railjack rework goes live. Dubbed “Intrinsics 2.0”, the overhaul will see the culling of many of the more boring options in exchange for newer, more “fun” variants. Additionally, Intrinsics will tie more cohesively into Warframe as a whole, such as allowing you to summon a Necramech into any Railjack mission.

The long-awaited “Command” Intrinsic will finally arrive in the Warframe Railjack revamp. This tree is built for solo-players, allowing them to recruit a selection of crewmembers from Ticker in Fortuna. Each will have five skill of varying strength that can all be improved, and they will belong to one of the various factions in Warframe. If you are friendly with them then you can expect a discount, yet the opposite also holds true.

Speaking of solo players, Dry Docks are being added to second and third tier relays, meaning players no longer need to build one within their clan dojo to access Railjack content in Warframe. This change is being paired with some general improvements to matchmaking, such as nodes following the same logic as their non-Railjack counterparts (if you click a node that doesn’t have any active squads within it you will launch a solo mission that the game will try to backfill). 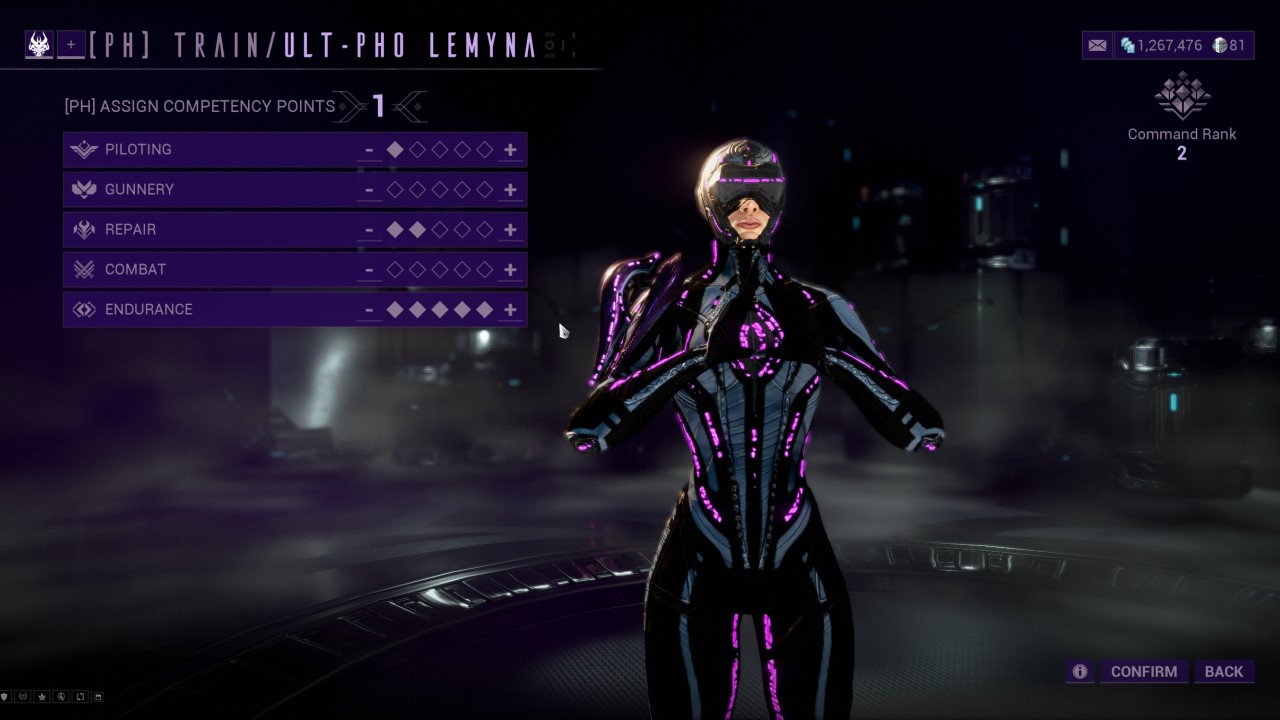 Early Adopters will be rewarded, and some of the larger pinch points are being addressed.

Railjack has been out for over a year now, and Digital Extremes plans to reward those who tried the game mode out during its rougher stages. Clans that built a Dry Dock will receive a commemorative Railjack statue, and there are tiers of rewards for individual players depending on the number of Wreckage they completed.

On the topic of Wreckage, Armaments should be easier to acquire after the Warframe Railjack revamp, since costs to repair and build Wreckage are being reduced. This should make finalizing your Railjack a touch easier to do, and far less grindy.

One point of contention was the size of the Railjack interior, which is being shrunk down in the revamp. No longer will you have to dart through multiple rooms just to reach the cargo bay: it is now directly below the Slingshot. The turrets have also been moved – they are now in-line with the pilot and not on the sides of the ship.

Stamina has also been removed, meaning pilots can dash and drift as often as they like. Since pilots now have full access to unlimited sprinting, Railjack abilities, and regular weapons, Digital Extremes will lock pilots out of firing their armaments while sprinting. They are willing to relax this change with feedback, but they want to ensure the pilot role doesn’t completely eclipse the gunner spot. 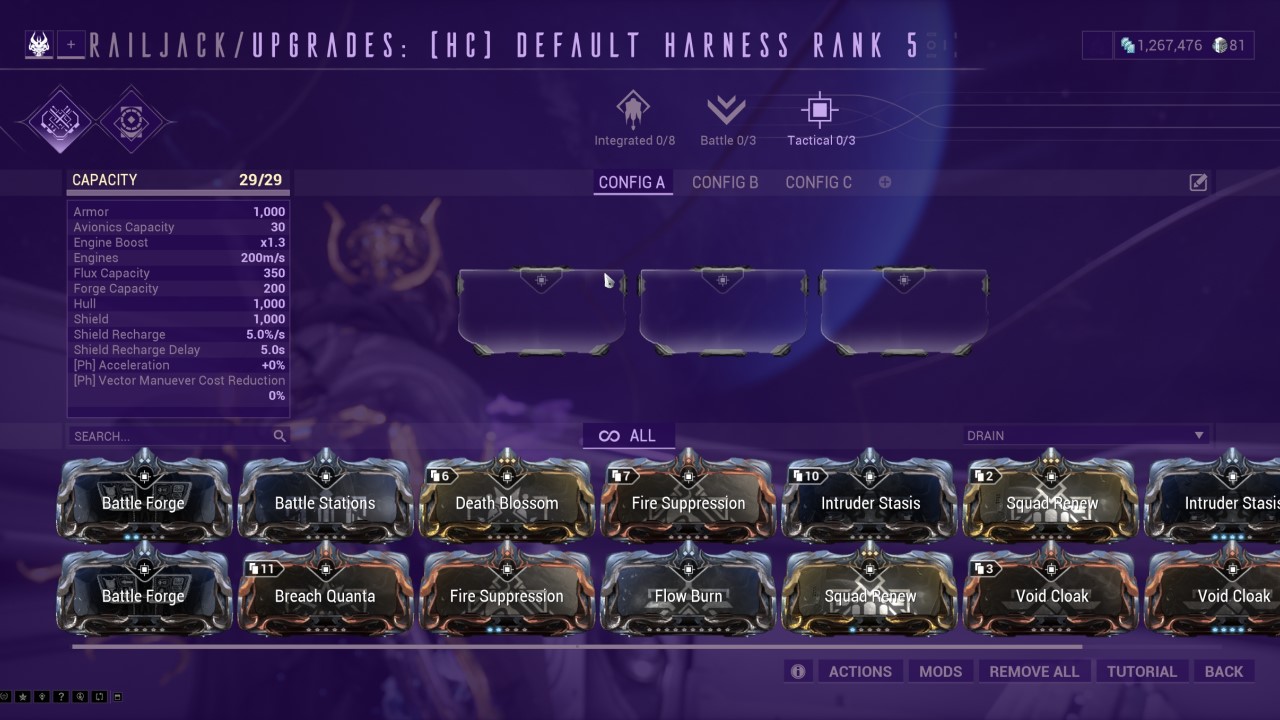 Resource pools, such as for Revolite, will no longer be shared by the entire team. That means your 100 Revolite is yours to use, which should make repairs less stressful. Flux Energy – the resource currently used to power Railjack abilities – will also be removed in favor of your actual Warframe energy pool. That means mods like Flow and Prime Flow will benefit you in Railjack if you plan to use a whole bunch of Railjack skills.

Furthermore, the Railjack damage types are being merged with their regular Warframe counterparts, so there shouldn’t be any confusion as to what damage type is doing what. Malfunctions are also receiving a facelift, and will be more entertaining to deal with (they will no longer impact your Railjack’s health or shields). These changes are: 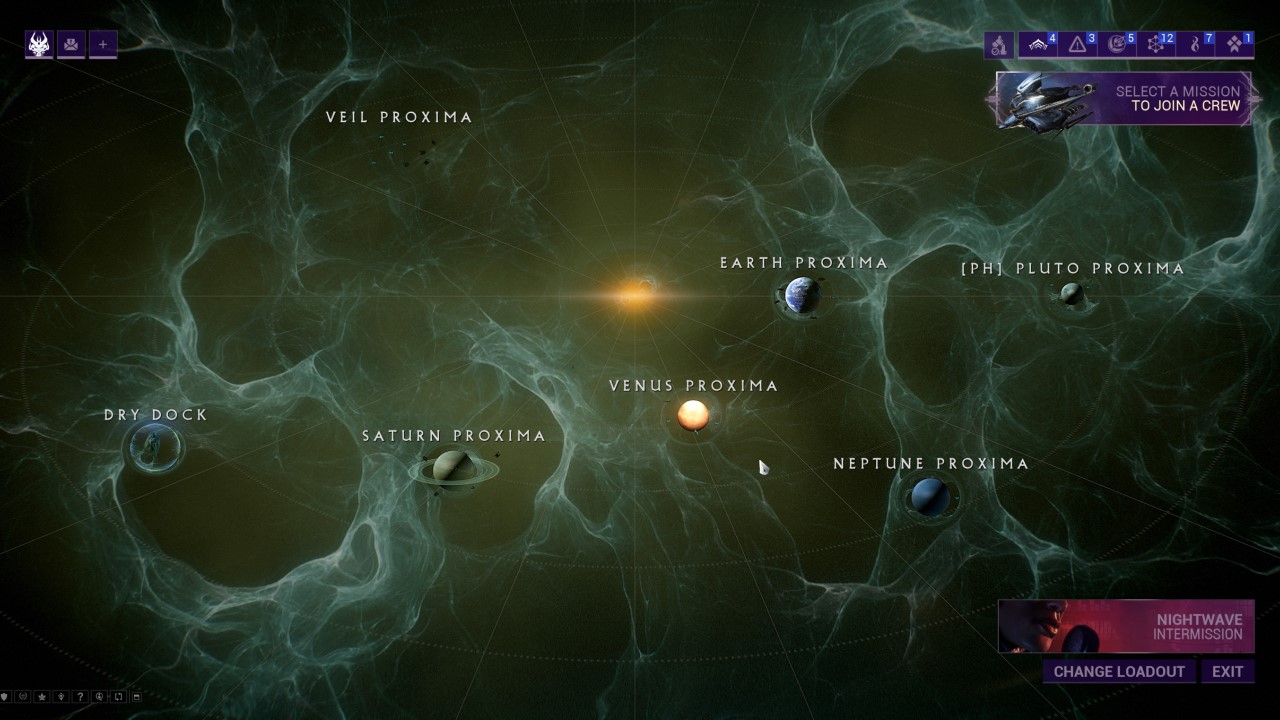 Bringing it all to port.

The Railjack revamp in Warframe will include some new playable content alongside the legion of changes being introduced. Corpus Proximas are coming to Railjack, and with them new game modes and the permanent addition of the Orphix event from last year. That means players will have an alternate path to earn Arcanes, though they’ll have to control their Railjack, Operator, Warframe, and Necramech if they plan to succeed.

Void Storms and Railjack relic cracking won’t arrive with the Railjack revamp, at least not on PC. Those two features have been pushed to Update 30, Call of the Tempestarri.  At the very least, Update 30 will feature a classic Warframe quest for the new frame, Sevagoth.

The Railjack Revamp will drop on PC in the next two weeks in Update 29.10, but console players will have to wait a bit longer. Update 30 will feature the Call of the Tempestarrir content, Sevagoth, and Railjack Revamp in one complete package for those playing on PlayStation, Xbox, or Nintendo hardware.

I’ve been on a bit of a hiatus from Warframe as of late, but these Railjack revisions are substantial enough to pique my interest. I may not be a daily players at the moment, but you can bet good credits that I’ll pop in once Update 29.10 drops on PC. You can read more about the Railjack revamp in the full Dev Workshop here, or by checking out the video below.

Warframe is out now for free on PC, PlayStation 4, PlayStation 5, Xbox One Xbox Series X|S, and the Nintendo Switch.

Home / Game News / The Warframe Railjack Revamp is a Complete Overhaul, and It’s Coming Soon to a Star Chart Near You