We also saw the next Prime Access, learned about the upcoming Railjack revision, and more. 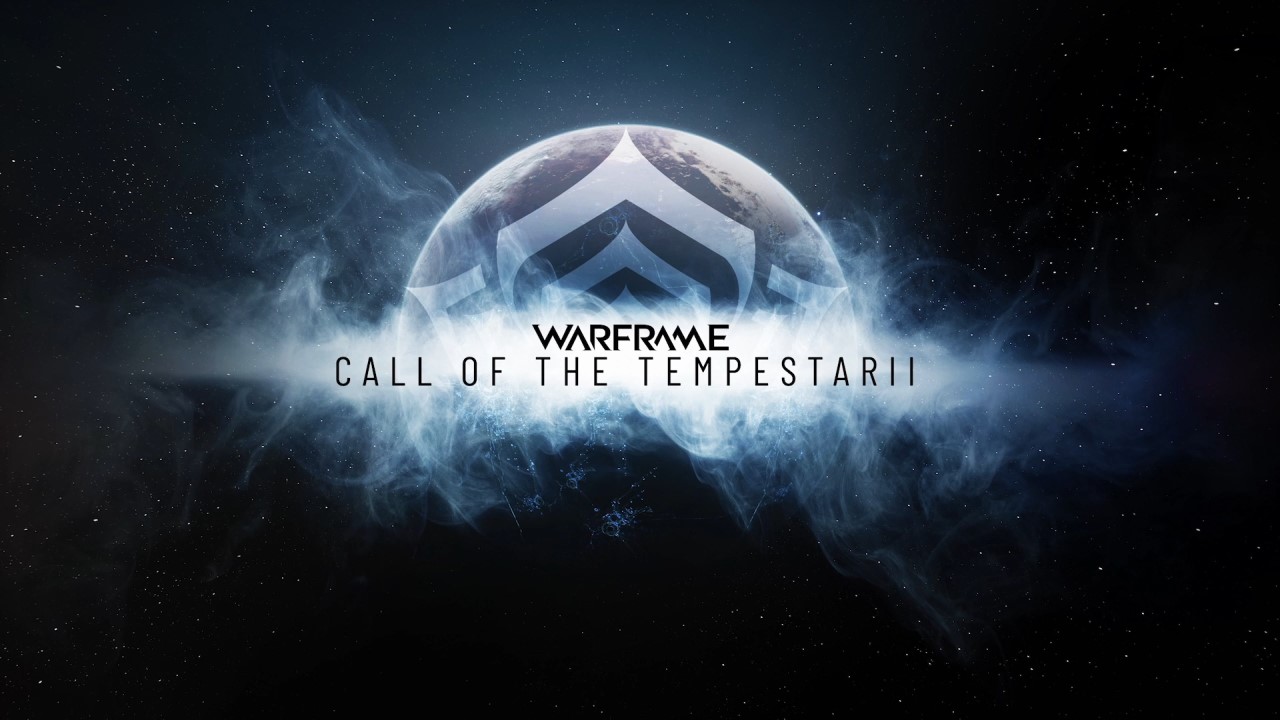 Today Digital Extremes hosted their first proper Warframe Devstream for 2021 – Devstream 151 – and they had quite a bit to discuss. The Codename: Wraithe Warframe was shown off, the next Prime Access was revealed, and even a Valentine’s Day event featuring Fortuna’s Ticker was given some airtime. There’s plenty more to unpack from Warframe Devstream 151, like a new weapon and yet another Railjack revision, so let’s get into it.

Earn your wings in the Warframe Star Days event, and get ready to farm Octavia Prime.

The Warframe Devstream 151 kicked things off with the “Star Days” Valentines Day event. It will be hosted by Tinker in Fortuna, and the Event Shop will feature a new Eros Wings Ephemera cosmetic. The Ignis Wraith and Snipetron will also return as rewards purchasable from the Star Days event store. The Star Days event shop will use Debt Bonds as its currency, so those of us who’ve farmed Fortuna to death should have enough to grab all the goodies immediately. The event will launch on all platforms simultaneously and run from February 11th until February 24th.

Community Director Rebecca Ford then quickly showed off the new Ghoulsaw melee weapon, and Creative Director Steve Sinclair confirmed it should be ready soon. The team then segued into the Nightwave Season 3 Intermission. It will feature some of the rewards from Season 3 itself, and there will be duplicate protection in place for rewards in the prize track players may have already earned (they’ll reward Creds instead). Steve confirmed the next Nightwave season will be simpler, citing player feedback from Season 3. The Nightwave Season 3 Intermission in Warframe will kick-off February 1st.

Rebecca briefly mentioned the Lunar Renewal event in mid-February before moving on to a much larger reveal: the next Prime Access will drop February 23rd on all platforms, and will feature none other than Octavia Prime. She will come with a Tenora Prime and Pandero Prime, and the usual collection of accessories. Her Prime doesn’t deviate too hard from her standard design, but damn is it slick (in my humble opinion). Her purchasable bundle does come with a custom Prime Shawzin, and it will be included in Octavia Prime’s Accessory bundle. 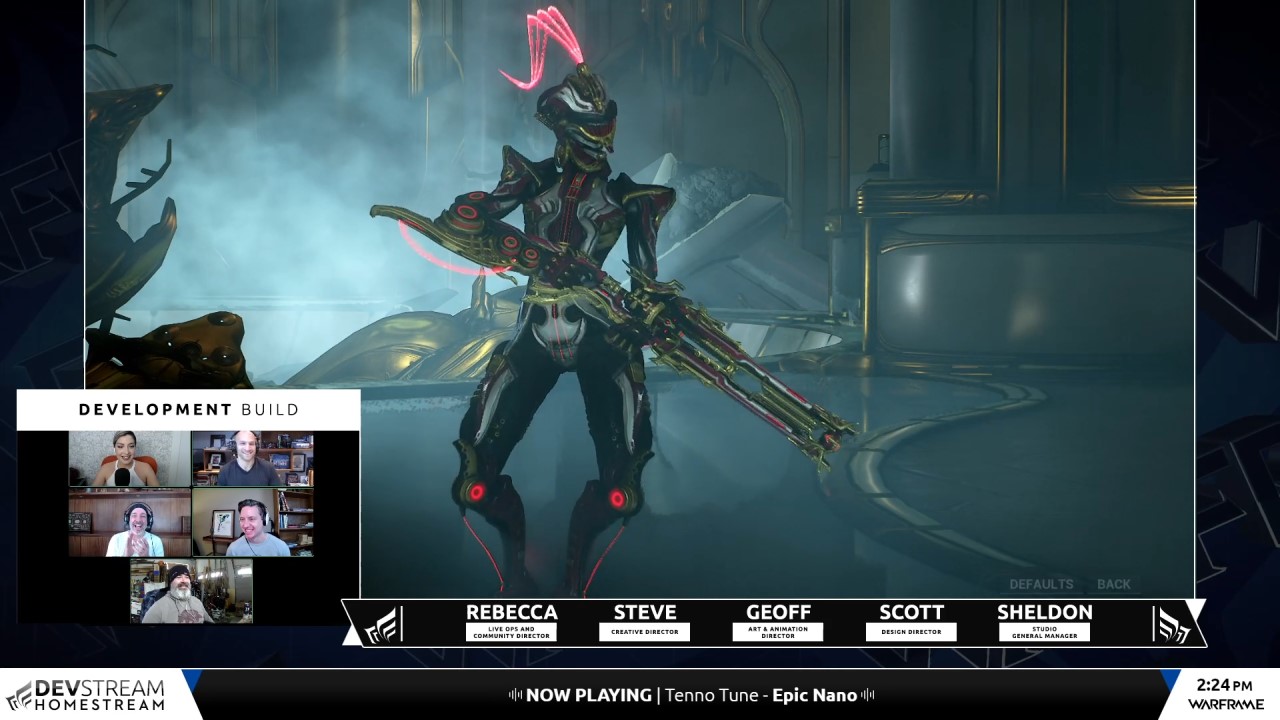 Devstream 151 revealed Sevagoth as the next Warframe; will deploy in Update 30.

Following the Octavia Prime reveal the Devstream pivoted to the next Warframe to join the game’s already large roster: Sevagoth. Formerly known as “Codename: Wraithe”, Sevagoth is a ghoulish Warframe that sucks the literal life out of its enemies. Its first three abilities – Gloom, Sow, and Reap – all build up a unique meter to power Sevagoth’s ultimate. Gloom lays down a life-steal AoE that benefits the whole party and slows enemies, while Sevagoth’s second ability, Sow, covers foes in a sticky darkness that deals damage and stacks even more life-steal. Sevagoth’s third ability, Reap, casts an independent Shadowform of Sevagoth that debuffs enemies and causes them to take additional damage (and it can even be redirected by aiming down your sights if you happen to miss your target).

Using these three abilities together will trigger powerful combos (“You Reap what you Sow,” as Rebecca said), all to charge up Sevagoth’s ultimate – Shadowform. Sevagoth enters an incorporeal Shadowform of its own, leaving its physical body behind. Shadowform has three abilities for Sevagoth to take advantage of: a conal attack that draws enemies within range of Sevagoth’s deadly shadow claws, a charge that launches out enemies’ souls to heal Sevagoth and confuse them, and finally an AoE version of Reap. To maximum Sevagoth’s vast murder potential we’ll need to cast its spells to charge its Shadowform meter, then swap to its actual Shadowform whenever the meter is full. As a passive, Sevagoth can use harvested souls to enable its Shadowform to revive itself. Sevagoth will drop in Update 30 with its own story quest. 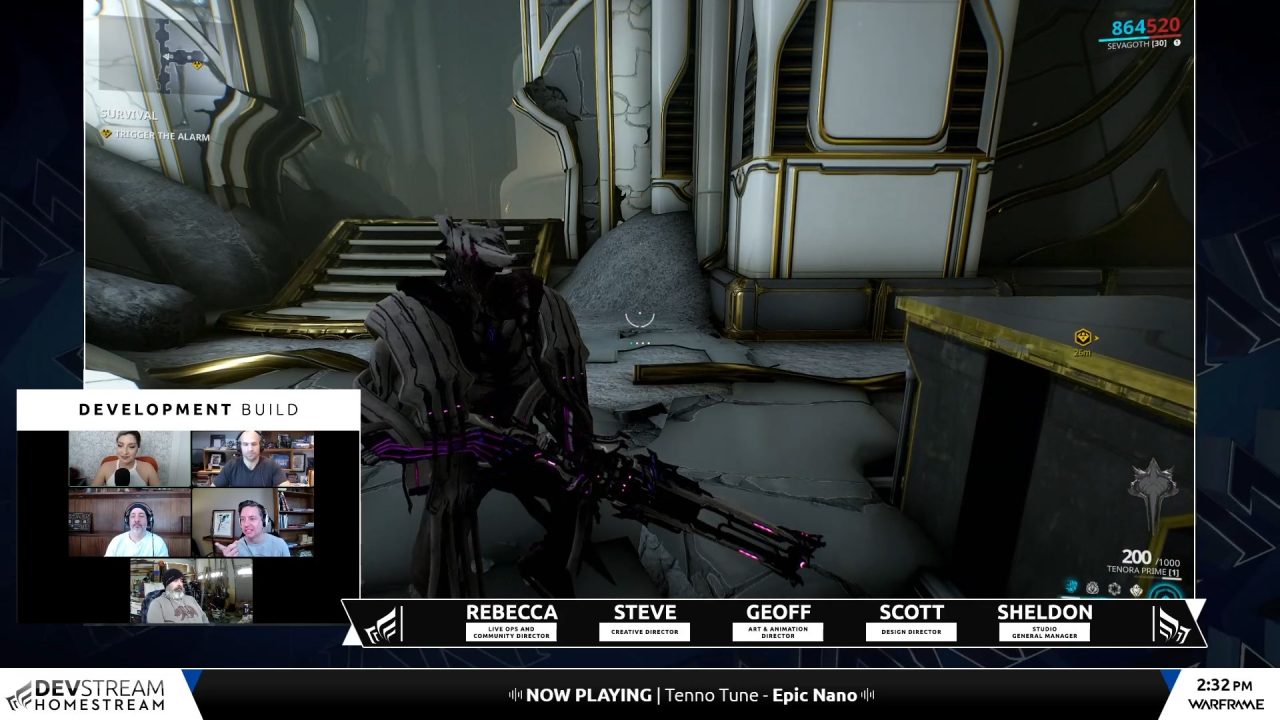 Warframe Update 30 was teased, will feature yet another round of revisions for Railjack.

Warframe Update 30 finally has a name: Call of the Tempestarii. The team remained coy as to what the name means, simple saying we’d have to wait and see once we get our hands on Update 30. Rebecca then mentioned they wouldn’t show off much the upcoming Corpus Railjack coming in Update 30 in DevSteam 151, because Railjack is receiving yet another round of revisions. The team confirmed they are integrating more of the usual Warframe core into Railjack, with the goal to make it less of a content island and more of an integral part of the game. For example: Railjack groups can be found and matched within the Saturn Relay once Update 30 goes live sometime in March.

It’ll be interesting to see how Digital Extremes ties Railjack into the rest of Warframe: the game has been suffering from an abundance of content islands that have muddied the progression loop, so any attempt to better marry them up with the core Warframe experience will be appreciated. That, and more Railjack adjustments are always appreciated (Intrinsics will be made less vital to progression, which is nice). The team did diverge into a quick side note unrelated to Railjack: clans can now preview decorations within their Dojos, and there will be larger skyboxes in the more open rooms. 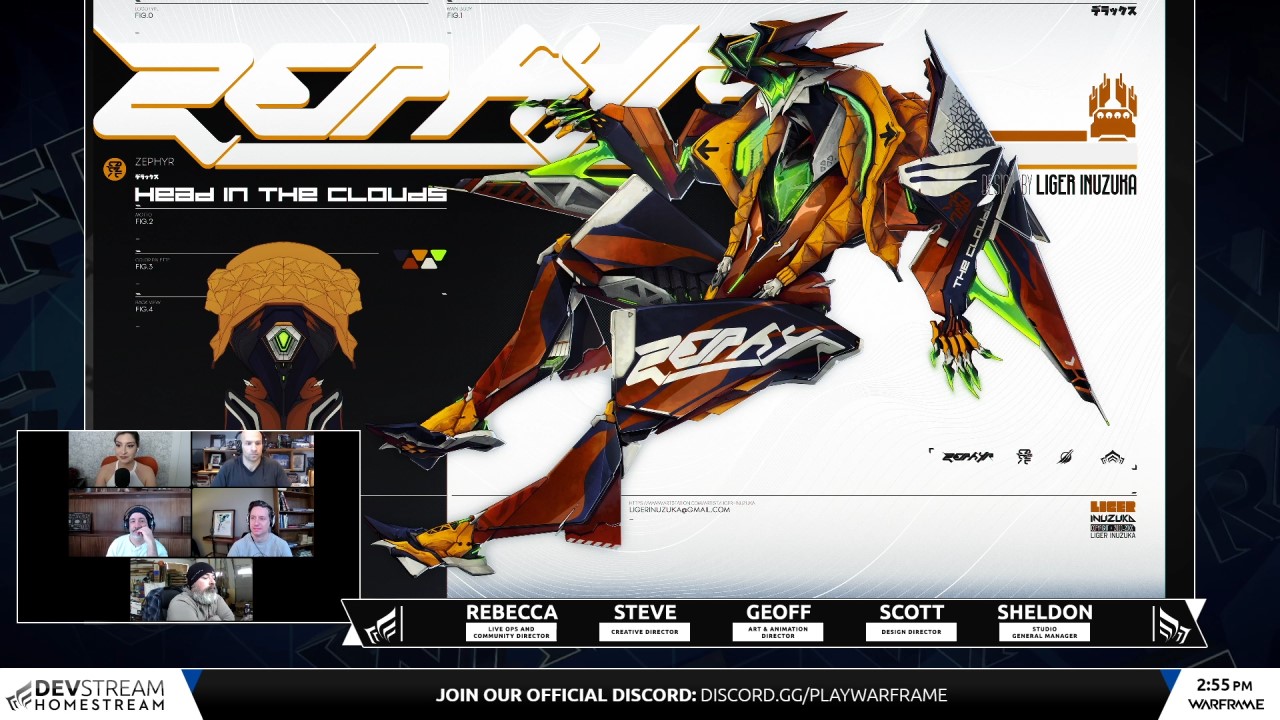 Zephyr Rework, Deluxe Skins, a Stats webpage, and the conclusion to Warframe Devstream 151.

The team then moved on to the Zeyphr rework, first showing off the Zephyr Deluxe skin by Liger Inuzuka (I hope you like mecha). The Deluxe Skin was followed by a landing craft skin also designed by Liger that will be included with the Zephyr Deluxe bundle. The Zephyr Redux itself will see adjustments to the Warframe’s kit. Tailwind will allow you to suspend Zephyr in the air by using it while airborne, but you’ll consume energy as you float (and as a bonus, Dive Bomb damage will be increased) Airburst will lean into its pull mechanic, which is being made more reliable, and Tornado will be reduced to three tornadoes with the pull effect of each increased. Turbulence, however, will not be changed. Zephyr will also gain a Crit-buff while in the air now as a part of her passive. Not the most cosmic of reworks, but they should make Zephyr less cumbersome to play.

The team then showed off a few of the other Deluxe Skins coming to Warframe before moving on to a new “Stats” webpage that displays various gameplay metrics from the game. Players can look up total playtime, most popular Warframes, etc., and filter it all by platform. Nothing too crazy on this front, but the Stat page will be yet another useful tool for the community to track how things in Warframe are going.

Devstream 151 then came to a close with some ambient music from Update 30, Call of the Tempestarii. While we learned a number of new things, Digital Extremes left quite a few mysteries on the table. What are the Tempestarii? Why are they calling us? What will the Railjack revisions look like? Who does Steve “whale” for in Genshin Impact? Time will tell when next month’s Warframe Devstream debuts, but until then you can watch the full recording of Devstream 151 here.