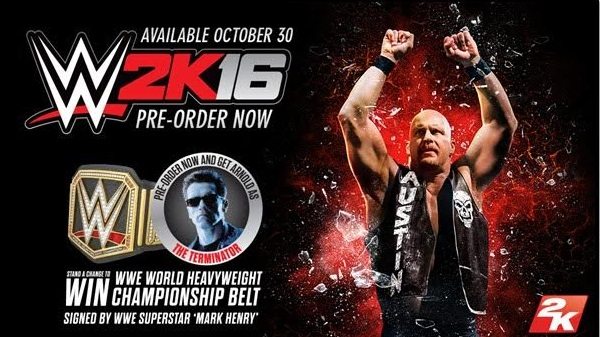 Most pre-order bonuses for WWE 2K16 in other countries gives you the chance to play as The Terminator. In India however, you get a chance to win a WWE World Heavyweight Championship title.

As reported by Gamingbolt, e-xpress Interactive are giving Indian gamers a chance to win a replica WWE World Heavyweight Championship title when they pre-order WWE 2K16 for PS3, Xbox 360, PS4 and Xbox One.

To register your chance to win the awesome looking belt, you can do so by clicking here. You need to give your name, email, city, phone number, retailer name, order number as well as which console you bought the game.

It is also worth mentioning the replica WWE World Heavyweight Championship title will also be signed by Mark Henry too. The promotion actually lasts until December 20th, so you have plenty of time to enter this unique competition. The winners should be announced closely after the December 20th date.

The new belt was revealed last year with Brock Lesnar being the first person to wear the new look. Now, Seth Rollins has the title and has been the main WWE Champion since WrestleMania 31. The replica belts cost well over $400 to $500 so winning it saves you a lot of money.