Where to Watch the Pokemon Nintendo Direct 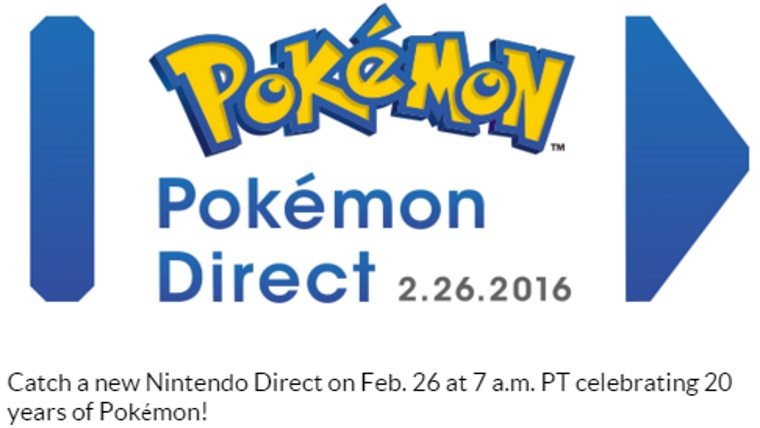 UPDATE 2: The presentation has ended, making Pokemon Sun and Moon official, and announcing that Red, Blue, and Yellow will be able to trade with them via Pokemon Bank, letting you bring the original 151 right into the new game.

UPDATE: The Livestream is active on YouTube, you can watch it below…

Thanks to some pretty hefty rumors of a Pokemon Sun and Moon announcement, the Pokemon Nintendo Direct is now even more important for fans to watch. Of course, you can’t do that if you don’t know where to watch it. As usual, there are multiple avenues to watch this latest Nintendo Direct, so here’s a few of them in case some don’t work or lag behind. The show should kick off at 10am Eastern Time.

Click here to go to the official page from Nintendo. This is usually a great way to watch the broadcast, as it doesn’t lag too much, and will also show reruns of it after it has concluded. With this Nintendo Direct only lasting for around five minutes, missing it the first time will be pretty common, so fans might want to focus on finding a source that lets them view it afterward.

Nintendo will also be livestreaming on their YouTube page if all goes according to the usual plan. Unfortunately we can’t link to the livestream until it is up and running, so click here to be directed to the Nintendo YouTube account, where it should be on the front page. If the presentation has already ended, you can click here to see all of Nintendo’s videos, which should contain the Nintendo Direct, as well as any trailers from the show.

Those are the biggest and best ways to watch the Pokemon Nintendo Direct, but we’ll update this article as the event draws closer. Once it’s up on YouTube you can just watch it right here, so keep checking back as we get closer to that 10am Eastern start time.

Home / Game News / Where to Watch the Pokemon Nintendo Direct