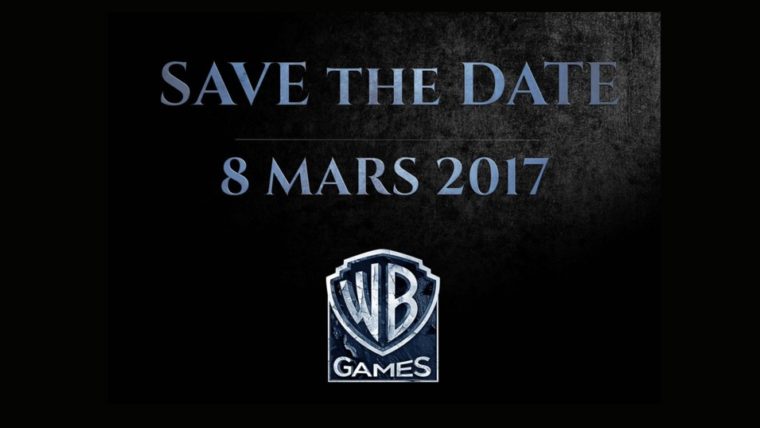 WB Games has a pretty solid slate of games coming up these next few months, including Lego Worlds and Injustice 2, but there are definitely a number of unannounced games that they have to have in the works. The wait to see what else they may have in store for us coming up may not be that far away based on a new teaser they have seemingly sent out.

This tease comes courtesy of IGN France, who tweeted the above image that says “Save The Date” and “8 Mars 2017” above a mysterious WB Games logo.

Just seeing this image might make you think it is fake at first, due to it saying Mars instead of March, but that is because this is in French, where Mars is indeed March. IGN France did not state at all where this image came from, simply asking what others thing it may be. Considering it is from IGN though, I would have to say it is more than likely legitimate.

WB Games has also published a few of the biggest games of the last few years, including The Witcher 3: Wild Hunt, Batman: Arkham Knight, and Mortal Kombat X, so any potential announcement from the company is definitely a big one.

It would seem doubtful that they would do a tease like this for Injustice 2, as it’s now consistently getting new content announced to where this would seem useless. There are a few rumored games though that it very well could be if this is a new game announcement entirely.

There is the constantly rumored Damian Wayne Batman game from Warner Bros. Montreal that is supposedly the reason for the never announced Suicide Squad game. There is also Shadow of Mordor II, which is all but a foregone conclusion to come some point based on the success and critical acclaim of the first game. However, for now we have no idea what this could potentially be, if it even if real in the first place.