New This Week in Video Games | The Worst Kinect Game Ever? 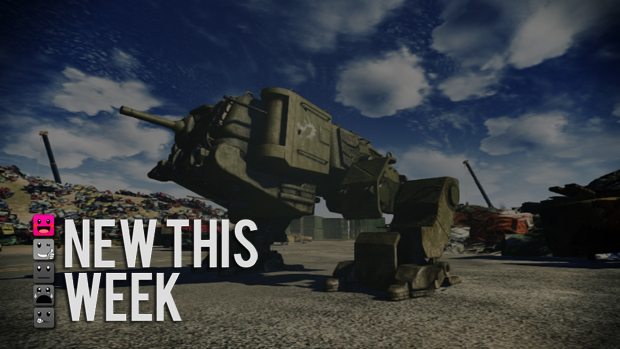 Steel Battalion: Heavy Armor – Xbox 360 – Taking full advantage of the Kinect Sensor for Xbox 360*, Steel Battalion: Heavy Armor is an Xbox 360 exclusive First-Person Action game like no other. Using the Kinect Sensor players engage in mech style gameplay that promises to deliver a uniquely immersive experience and an evolution in warfare gaming. Features include a futuristic, yet low-tech military campaign dominated by hulking vertical tanks (VT), tank customization, the necessity of getting to know and protecting AI squadmates, and online multiplayer support via Xbox LIVE.

Let’s Dance – Xbox 360, Wii – The ultimate dance party has begun! Let’s Dance takes you to a new realm of dancing genius as you perform to popular tracks from the past and present. Perform on a television stage and battle up to 8 players for the best score. Featuring 4 exciting game modes, professional choreography, and 28 hot songs, you’ll shake all you’ve got to hits from Fergie, Culture Club, Pussycat Dolls, Rihanna, Lady Gaga, and more! Choose from tracks from the following musical categories: Pop, 80’s, Urban, Party Classics, Latin, and Club. The party never stops with Let’s Dance!

Brave – PlayStation 3, Xbox 360, Wii, PC, DS – Brave: The Video Game is a Third-Person Action-Adventure game that is a companion release to the Disney/Pixar 2012 major animated release of the same name. Brave is Pixar’s first fairy tale release and features the adventures of Princess Merida, the studio’s first female lead character in a movie. The game features: a family-friendly storyline, bow and arrow as well as a sword combat, agile in-game movement, puzzle play, characters from the movie as well as others unique to the game, co-op play and the ability to play as a bear, and optional support for the Kinect sensor for Xbox 360.

Quantum Conundrum – PC – When you, as a young boy, are dropped off to visit your uncle, you notice something’s wrong. First, he’s not there to greet you. Second, there’s the explosion that happened right as you arrived. And third, the house seems to be even weirder than you remembered it. Now, your job is to find—and ultimately rescue—your uncle, by using his newest invention, the Interdimensional Shift Device, to switch between dimensions and solve puzzles. That sofa too heavy to move? There’s a dimension for that! Switch to Fluffy Dimension and that sofa is now light as a feather. Need to get up to a high ledge? There’s a dimension for that! Just switch to Anti-Gravity Dimension and things begin to float upward. Need to make things heavier? There’s a dimension for th—well, you get the idea. Switch dimensions in real time, work your way through the crazy complex mansion wings and rescue your uncle!

Pokemon Conquest – DS – It’s a new world of Pokémon battles! Become a Warlord and build your kingdom! Welcome to a world inhabited by mighty Warlords and their Pokémon—It’s a new way to experience Pokémon! Use your Pokémon—and the special ability of your Warriors—to build your kingdom! Train your Pokémon and recruit more Warriors! With nearly 200 Pokémon, mainly from the Pokémon Black Version and Pokémon White Version games, there are many options when building your army! Unite the 17 kingdoms of Ransei and awaken the Legendary Pokémon!

Magic: The Gathering – Duels of the Planeswalkers – PlayStation 3, Xbox 360, PC – In the latest version of this hit franchise, play with friends or the AI as you travel across fantastic planes, take on new encounters and opponents, solve challenging puzzles, and face up to three other players in the Planechase multiplayer format. After honing your skills, pit yourself against the ultimate villain of the Multiverse, the dragon Planeswalker Nicol Bolas.