New This Week in Video Games | The Finale For Mass Effect 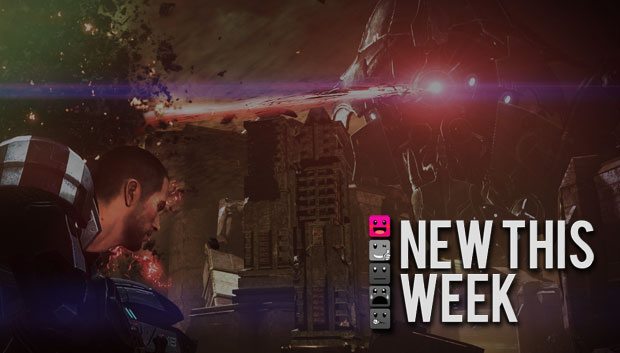 Mass Effect 3 – Xbox 360, PS3, PC – Mass Effect 3 is a Role-playing Game (RPG) / Third-Person Shooter hybrid set in a Science Fiction universe. Mass Effect 3 is the third game in the popular Mass Effect series, and is rumored to be the final installment. In it players continue the adventures of Commander Shepard utilizing extreme character customization which is the hallmark feature of the series. Additional features include: the ability to import decisions from both of the previous games into the new game, ownership/play of previous games not required, customizable weapons, improved mobility and melee combat, many returning characters (if they were not killed off in previous imported games), an improved cover system that allows for more action, compatibility with the Kinect Sensor for Xbox 360 and more.

MLB 2K12 – Xbox 360, PS3, Wii , PC, PSP, PS2  – MLB 2K12 is simulation baseball video game, and the longest-running Major League Baseball game available. MLB 2K12 continues the evolution of the MLB 2K game franchise with a variety of features designed to please both longtime and new fans of the series. Features include: the six-month long MLB Today Season Mode, a dynamic AI system that adapts to your tendencies, a new throw meter, and improved My Player Mode, new soundtracks to play to and multiplayer support.

MLB 12: The Show – PS3, PS Vita  – MLB 12 The Show is a PlayStation-exclusive baseball simulation game that combines the outstanding graphics quality and features that has made it the top rated Sports video game franchise for four years running. The PlayStation 3 version of the game features optional full PlayStation Move control support, four-player multiplayer support online and offline, the online Diamond Dynasty mode, cross-platform saves with the PS Vita version of the game and an extensive roster of realistically portrayed MLB players.

Blades of Time – Xbox 360, PS3 – Play as the gorgeous gunsword-wielding treasure hunter Ayumi as she carves a path of destruction through a mysterious and dangerous island. While rich with bounty, the island is also caught in the throes of Chaos magic. Ayumi soon discovers that it is also the home of thousands of long-held secrets, including special powers and abilities that she can gain for herself. Using everything she can, she must find a way to defeat armies of menacing villains and a multitude of treacherous traps in order to break free of the possessed island’s grasp. With a host of colorful characters, eye-popping visual appeal, tons of treasure and a huge variety of combat skills to master, Blades of Time will satisfy gamers’ hunger for an entertaining yet deep action game that even gamers new to the hack-and-slash genre will enjoy.

I Am Alive – XLBA – One year after a worldwide cataclysmic event has wiped out most of human civilization, a man struggles for survival. Faced with an insecure, decaying, and hazardous world, he scours a desolated city, searching for his long lost wife and daughter. Survive the suffocating, murky streets covered in dust. Climb the teetering remains of the last standing skyscrapers to reach breathable air and find untouched resources. Explore the crumbling ruins of a once-thriving metropolis. And discover a changed human condition, punctuated by distrustful survivors, dangerous armed gangs, and victims in need.

Journey – PSN + – Journey is an interactive parable, an anonymous online adventure to experience a person’s life passage and their intersections with other’s. You wake alone and surrounded by miles of burning, sprawling desert, and soon discover the looming mountaintop which is your goal. Faced with rolling sand dunes, age-old ruins, caves and howling winds, your passage will not be an easy one. The goal is to get to the mountaintop, but the experience is discovering who you are, what this place is, and what is your purpose. Travel and explore this ancient, mysterious world alone, or with a stranger you meet along the way. Soar above ruins and glide across sands as you discover the secrets of a forgotten civilization. Featuring stunning visuals, haunting music, and unique online gameplay, Journey delivers an experience like no other.

Mario Party 9 – Wii – Grab your friends and family and captain the crew to victory! The party is back and bigger than ever in the Mario Party 9 game for Wii, featuring all-new ways to play! For the first time in the franchise, boss battles crash the party and challenge players to compete to defeat a common enemy. In addition, players now travel across stages together in a vehicle towards a common goal – overcoming obstacles, battling bosses, and collecting Mini Stars stolen by Bowser and his minions. Featuring 80 new minigames, adventurous new stages, and all-new ways to play that blend cooperative and competitive action for up to four players, Mario Party 9 is the perfect way to get the party started. No time to play through an entire stage? New minigame modes let players enjoy the action in smaller chunks of time. They can hone their skills at any minigame in Free Play mode or try the Extras mode that includes Goomba Bowling and the puzzle-based Castle Clear out.

Crush 3D – Nintendo 3DS – Imagine being able to change from a 3D world to a 2D world at the touch of a button. Reinvented for the Nintendo 3DS, CRUSH 3D is the unique platform game that gives you the ability to change perspective from 2D to 3D as you try to solve brain-teasing puzzles

Naraba’s World: Labrynth of Light – DS – Naraba’s World is an educational-themed series of games designed specifically for children ages four to nine. “Naraba” refers to a series of tropical islands where players can explore, engage in mini-games, and travel from place to place in a choice of transportation options. Players can create a custom character and then interact with the island’s inhabitants, receiving missions and completing activities that reinforce lessons from a variety of school subjects. Each entry in the Naraba series features a different adventure and assortment of activities to master.

The Sims 3 Showtime – PC – Make your rise to fame in The Sims 3: Showtime Katy Perry Collector’s Edition with unique Katy Perry themed in-game content and an exclusive poster. This Collector’s Edition includes The Sims 3: Showtime Expansion pack, plus downloadable content including an Ultimate Stage bonus venue, iconic Katy Perry themed items, and an exclusive poster. The iconic content includes fashions, a guitar, a hairstyle and various Katy Perry themed stage props. Venture into a new world of Starlight Shores and live the story of your Sims as they become superstar singers, acrobats, magicians… and they can even moonlight as DJs. Watch your Sims rise to fame – or go down in flames as they perform and practice for other Sims. New optional social features allow you to share your big moments and connect with friends and fans of The Sims like never before. Send your Sim into a friend’s game using the new, optional SimPort feature to perform in their world, book gigs in their town, go on tour and be reviewed. Along the way, earn rewards for achieving goals and accomplishing special challenges that can be tracked and shared via in-game social wall posts and beyond.

Ridge Racer Unbounded -Xbox 360, PS3 – Drive Hard, Create Anything, Destroy EverythingWith Ridge Racer Unbounded, the Ridge Racer franchise gears up to carve its own destructive path on a spectacular collision course with PlayStation 3, Xbox 360 and PC. Ridge Racer Unbounded adds an unexpected destructive dimension to the series, delivering an original blast of ferocious racing adrenaline. Join the Unbounded street racing gang and test your driving skills against rivals in every street and alley of Shatter Bay. Prove your worth behind the wheel to get respect and expand your turf. For endless race variety, use the simple but powerful City Creator to design amazing original tracks in minutes.