New This Week in Video Games | Toys To Life 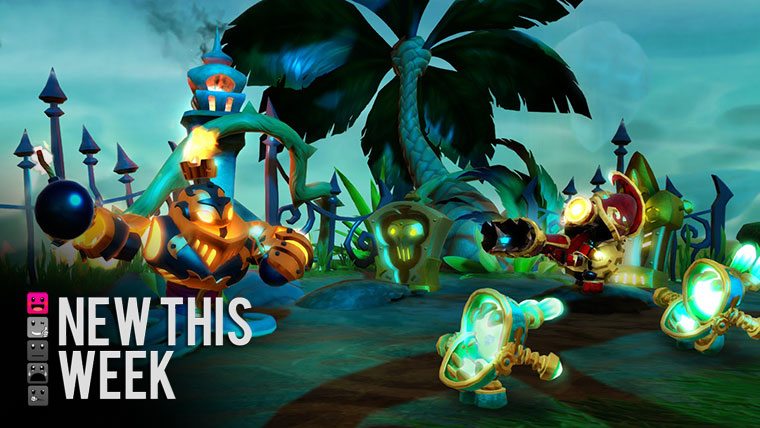 Skylanders Swapforce – Xbox 360, PlayStation 3, Wii U, Wii, 3DS – Embark on an exciting new adventure with the Skylanders and the SWAP Force. For generations, the SWAP Force protected the volcano that replenishes Skylands’ magic. That is until an epic battle caught them in an eruption that blasted them apart, sent them to Earth and gave them the ability swap powers. Only you can mix and match their tops and bottoms, put them on the new Portal of Power and help save Skylands.

Cabela’s African Adventures – Xbox 360, PlayStation 3, PC – Wii – Explore the vast wilderness of Africa on foot and by vehicle, where you’ll go head to head with the most ferocious beasts on the planet as you attempt to take down the biggest of the ‘Big 5’: the Rhino, Lion, Leopard, Cape Buffalo & African Elephant.

Wipeout Create and Crash – Xbox 360, Wii U, Wii, 3DS – The competition begins now! Wipeout Create & Crash brings the fun and excitements of the popular Wipeout TV show inside your living room like never before with the all new Course Creator. Do you have what it takes to conquer the world-famous Big Balls? Go all in or you’ll WIPEOUT!

Valhalla Knights 3 – PS Vita – Valhalla Knights 3 marks the return of the gritty action RPG series, now taking full advantage of the powerful PS Vita hardware to provide intense real-time battle and smooth seven-on-seven party-based combat. After creating a main character and field-worthy party members from one of seven races such as human, elf and beast with a myriad of customizable physical traits, each character is assigned a job class from the twenty available such as fighter, mage and priest.

The Stanley Parable – PC – The Stanley Parable is a first person exploration game. You will play as Stanley, and you will not play as Stanley. You will follow a story, you will not follow a story. You will have a choice, you will have no choice. The game will end, the game will never end. Contradiction follows contradiction, the rules of how games should work are broken, then broken again. This world was not made for you to understand.