The latest news in the world of video games at Attack of the Fanboy
May 13th, 2016 by Kyle Hanson 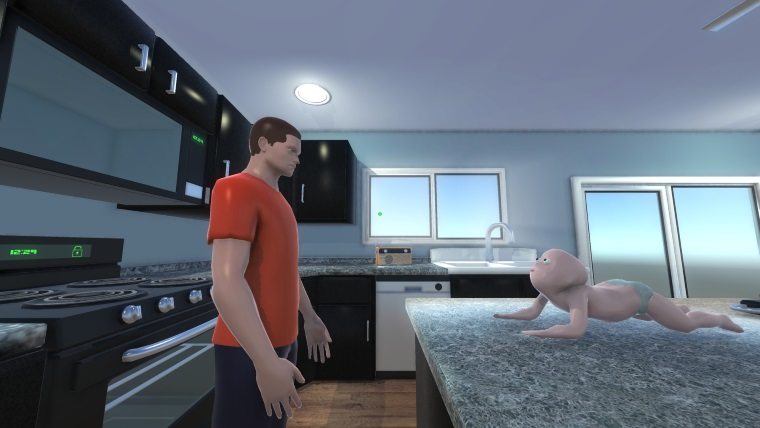 Steam Early Access is both a blessing and a curse for gamers. The service allows smaller studios to put their game out to the public, without the higher expectations that one has for a finished product. Yet, while it lets gamers play a lot of new games earlier than they otherwise would be able to, it also has become a dumping ground where games enter, but never leave. One of the more popular Steam Early Access games of late is bucking this trend though, with the news that Who’s Your Daddy has entered full release with update 1.3.0.

Who’s Your Daddy, in case you haven’t been visiting some key YouTube gaming channels, pits two players against each other in an asymmetrical multiplayer experience. One player is the titular Daddy, who is taking care of his infant child at home alone. The other player is the baby, and his job is to use everything around the house to try to kill himself. The result is a very unique and sometimes hilarious experience, as players fight with each other over batteries, forks, and bleach.

Who’s Your Daddy update 1.3.0 patches up a few issues, and adds some new features, along with making the artificial transition into the full release version of the game. The patch notes include: “22 Achievements to unlock. A new custom made soundtrack created by Mathias Bjørnskov. A new outside area to explore! The Room of Great Achievement is now unlocked to show off your trophies. 7 New Hats and Masks to be unlocked through Achievements.”

To celebrate the full release Who’s Your Daddy is currently on sale, at 20% off the normal price of $4.99, making it $3.99 for a limited time. Reviews from the Steam community have been “very positive”, so for the game to hit full release is pretty good news for its growing base of fans.