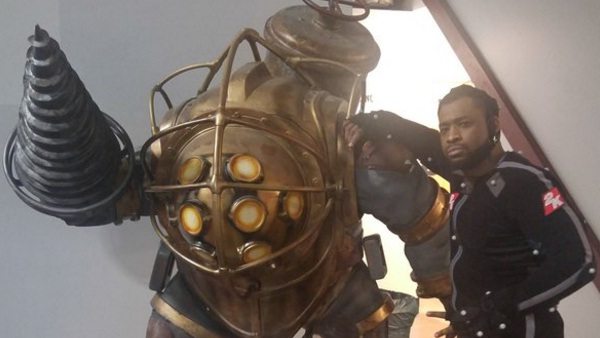 The motion capture work for WWE 2K17 has already started as 2K Games has recruited many former TNA talents to do the job for this year’s upcoming game.

As noted by Wrestlezone, former TNA wrestlers Kenny King, TJ Perkins and Low Ki were at 2K Studios earlier this month to do motion capture performance work on WWE 2K17.

Kenny King even posted on Twitter a photo of himself at 2K Studios with his mo-cap suit on. He was posing next to a big statue of Big Daddy from the BioShock game.

Low Ki is a wrestler that has been doing mo-cap for WWE video games for many years now. He was actually employed by the company several years ago when he was renamed Kaval.

However, he asked for an early release. He joined WWE too early in my opinion as he would have suited the current NXT product better than back in 2010.

The fact that these guys are doing mo-cap work means 2K are planning to add more moves to the new game. It will be interesting if AJ Styles is involved with WWE 2K17. He did the mo-cap work for the TNA video game that was released by Midway back in 2008.