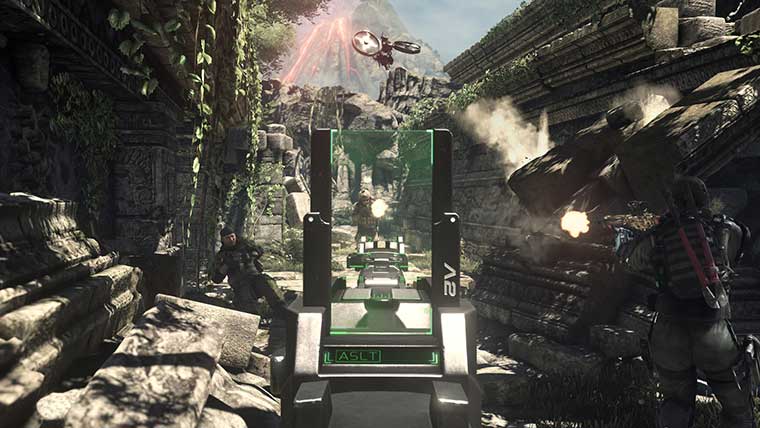 The Devastation DLC for Call of Duty: Ghosts continues down the same path that the first bout of downloadable content did. Infinity Ward adds another weapon to the multiplayer formula, four new multiplayer maps, and the second story extension to Ghosts’ Extinction cooperative mode. Like “Onslaught”, the first downloadable content for Ghosts, Devastation is a mixed bag, but has a similar, more playful and dynamic tone.

Devastation adds four multiplayer maps to Ghosts, bringing the total up to 23 in all. The new maps, Behemoth, Collision, Ruins, and Unearthed continue to build on the more dynamic tone of Ghosts, adding even more level changing events and unique power-ups to earn. Like the first DLC, there’s another hidden character to unlock in Ghosts. The Predator, can be unlocked on the Ruins map, allowing you to take control of the iconic villain from the movies. Again, out of the four maps, one is a re-skinned map from a previous game in the series. Dome, a fan-favorite map from Modern Warfare 3 has returned as Unearthed.

Ruins is quickly becoming one of the most popular new maps in Call of Duty: Ghosts Devastation, and it’s probably because of the playable Predator reward and active volcano set in this jungle environment . Sure, this Predator killstreak reward alongside the Michael Myers character from the previous downloadable content make it look like Call of Duty is running out of ideas for their DLC, but it’s undeniably cool to take control of this character nonetheless. 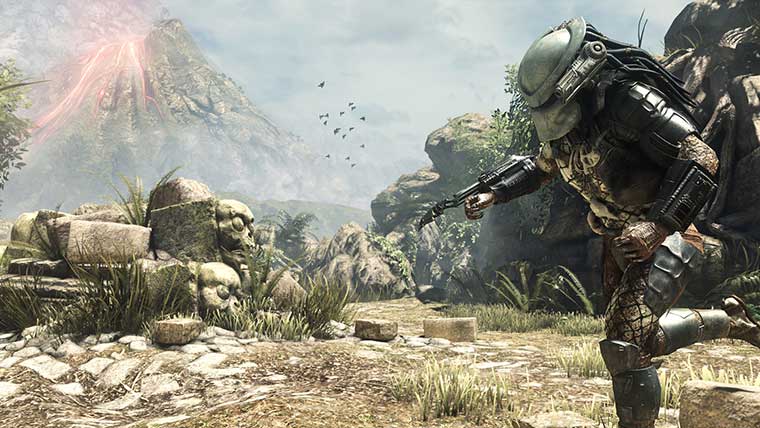 You’ll need to earn the Predator through completing field orders in a multiplayer match on Ruins. The drop is completely random, so just completing the field orders won’t earn you the Predator, you’ll need to get a little lucky. Once you do, you’ll be decked out in the Predator gear, and have a number of powers at your disposal. The Predator is invisible unless shooting, sprinting, or stabbing an enemy. Stalking other players, you’ll have access to thermal vision, a powerful shoulder mounted launcher, and a claw. When the Predator is killed, he unleashes a KEM Strike on the enemy team, wiping out everyone. The Predator plays similarly to the Michael Myers character from Onslaught, or the Maniac Juggernaut, there’s just an element of stealth added to the mix.

As for the map, it’s set at the foot of a massive volcano in a dense jungle environment. It’s one of the better looking environments of the new four, with a mixture of dense foliage and maze-like corridors of the ruins themselves. Ruins has a second special field order reward in the form of the volcano, earning it unleashes its powerful eruptions. 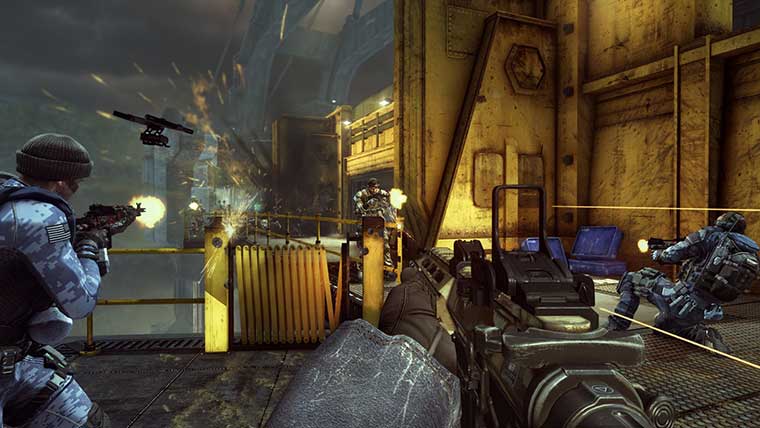 Behemoth takes place on top of a giant excavator, but you wouldn’t really know it if you don’t peer off the sides of this monstrosity of a machine. It’s a very straight forward map, and is one of the most narrow maps we’ve seen in a Call of Duty game. Behemoth caters to Close Quarters players, where shotguns and smgs seem most effective. There are a few spots for snipers or long range players to focus on choke points, but the map feels largely focused on close quarters.

Earning the level specific field orders in Behemoth will call in a Heli-Gunner. This puts the player on a mini-gun on the on the side of a chopper. Like the Helo-Scout, players can be shot who are controlling the streak, ending it abruptly. You can, however, move the helicopter freely around the map, looking for vantage points and staying out of the line of fire. 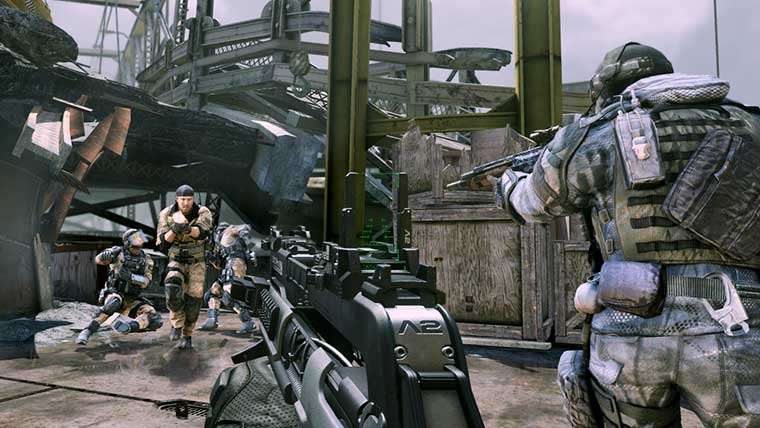 Collision is a strange map with some unique features. As its name denotes, it’s a collision between a tanker and a bridge, fusing the two environments together. Everything is set on a slight slant in this medium-sized map. It’s got plenty of tunnels, flanking options, and elevated windows that look into a central main area.

Collision has a unique feature for Domination players, with a B objective that is completely exposed and elevated. It makes this objective highly contested in this mode, with which the map was seemingly designed for.

As for map specific goodies, Collision has yet another new field order reward with the A10 Warthog Strafe. The Killstreak is similar to the Warthog from Black Ops 2, but it allows players to actually fly the plane on two strafing runs across the map. Instead of the Warthog being controlled by the computer, you can fire missles and fire cannons at enemy opponents yourself. Collision feels like the least inspired map of the group though, if only for the been-here seen-that environment. 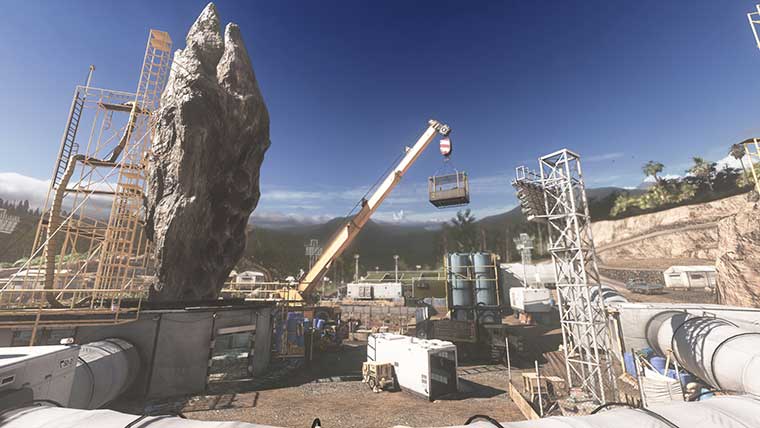 If Call of Duty players love one thing, its small maps that push hectic action. We’ve seen it year-in and year-out with maps like Rust and Nuke Town. Unearthed is another one of these smaller maps, while not quite as small as those previously mentioned, Unearthed is a remastering of Dome from Modern Warfare 3 — A small map that pushes action into what is essentially three paths.

The map has seen minor tweaks to its previous form, but the layout is almost exactly the same. Some of the sight lines have been altered by new layers on the environment, which transforms the former military compound into an excavation site, but it’s wholly familiar. What’s not familiar are the Alien Seekers that can be called in as Field Order reward in this level specific feature, introducing the aliens from Ghosts’ Extinction mode into competitive multiplayer. The Seeker Field Order Reward acts similarly to the attack dogs from previous games. The pack of Seekers will seek out enemies, and travel around the map in a pack until they do.

There’s also a hidden powerful weapon that calls back to Extinction Mode, hidden on a crane in this level. You can find out how to snag the Venom-X in this tutorial for a powerful explosive projectile launcher. 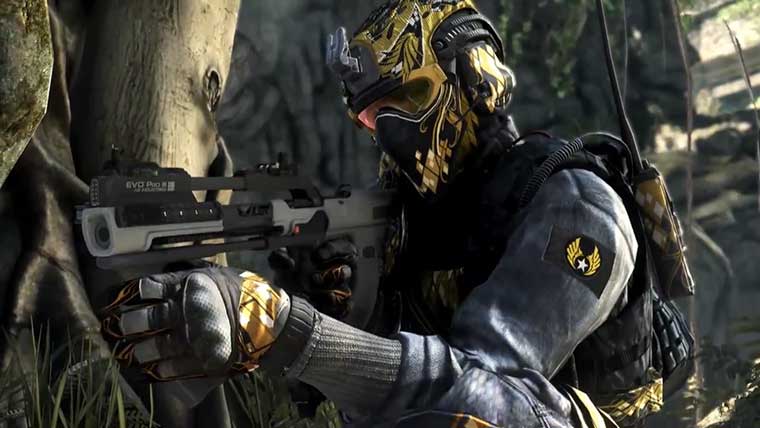 Call of Duty: Ghosts Devastation also introduces a new weapon into competitive multiplayer with The Ripper. The Ripper is a weapon that functions as both an Assault Rifle and Sub-Machine Gun, and is very capable in either capacity. It allows for players to be ready for both long and short range encounters, and has become pretty popular, pretty quickly.

There are a number of different ways to utilize the Ripper in your class set-ups, The Best Ripper Class Set-Ups you can find here.

The Ripper is an interesting weapon because it allows you to have a wider range in your style of play, without needing to switch to a different weapon or carry two primaries. Whether you like to run and gun, stay at a distance, or do a little of both, this gun can facilitate many different play styles by simply toggling the fire mode for the weapon.

While the Ripper does offer the best of both worlds, the new mechanic of switching between firing options, and always being aware of which firing mode you are in, is a new feature to wrangle with. It’s easy to tell which mode the weapon is in, by the scope, or lack thereof. You’ll also be able to tell by the firing rate of the weapon. In SMG mode, the gun fires at faster rate. The Assault Rifle mode has a slower rate of fire, making it more accurate at long range. 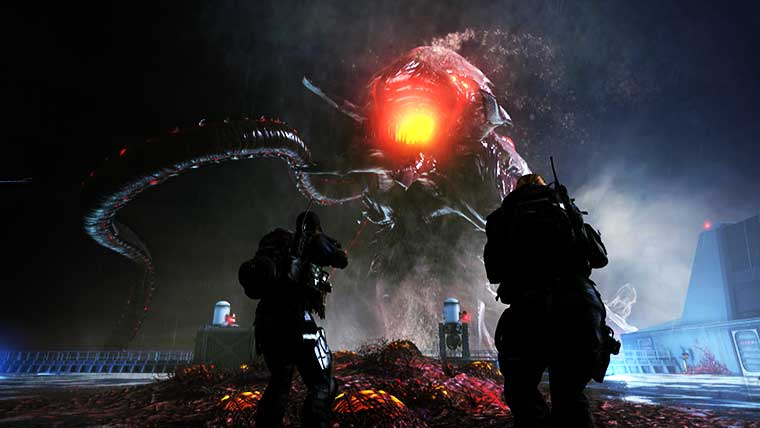 Extinction might have been overlooked at launch as a Call of Duty Zombies wannabe, but with the second bout of episodic content, it’s really coming into its own as a robust class-based cooperative experience.

Mayday continues to build on the premise set forth in the “Point of Contact” and “Nightfall” episodes, adding a massive boss fight and a handful of new enemy types to tangle with on an alien-infested tanker ship. Players can completely customize their character’s look and functionality, assigning classes and perks to them, for the best chance at surviving what can be a very challenging mode.

Littered throughout the Mayday Episode of Extinction are pieces of intel which expand on the story, for those that are looking to get the complete picture. Whether you’re looking for all the secrets of Extinction or just like blasting on aliens, Extinction is most fun with friends. The cooperative and class-based nature of the game allows for a lot of strategy with class specific buffs.

Nightfall was a step forward for Extinction, and Mayday continues this forward progress for the mode. With two more episodes to go, its getting even more interesting on the whole as a story. Though the real draw is in the replay value for finding all there is to discover when it comes to hidden items and weapon crafting.

A new batch of Killstreak Rewards are the highlight of the four competitive multiplayer maps in Ghosts’ Devastation DLC. We’ve seen more inspired work from the various Call of Duty teams in the past, when it comes to creativity and level design in the competitive component of this content. The addition of the versatile Ripper weapon is welcome, as more load-out options is always a good thing. For those that dip their toes into the improving Extinction mode, this content has a lot more value.