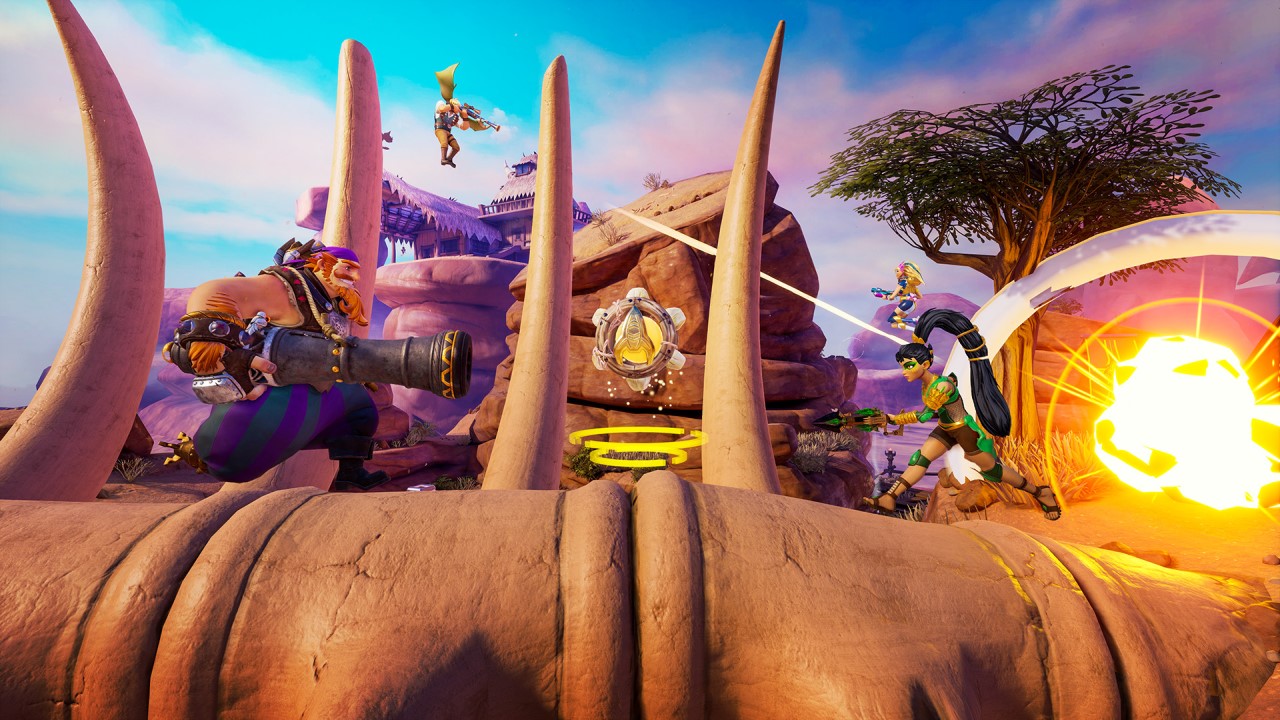 What if you took the cartoonish charm of Fortnite, threw it into the hero-shooter arena, and equipped every gal and guy with a rocket launcher? You’d get Rocket Arena that’s what, Final Strike Games debut family-friendly multiplayer shooter. It’s a quirkly little indie title that tries to soar to new heights, but does it reach the stratosphere, or explode into bits?

Imagine Disney’s “World of Tomorrow” as pictured in the 1950s, but everyone’s armed to the teeth with jet-fueled explosives. That’s the basic premise behind Rocket Arena, a 3v3 third-person multiplayer shooter where the key to victory is not to gib your opponents into a splattering of guts and gore, but to instead “punch” them outside the arena.

Think Super Smash Bros. by way of Quake Arena, and you’ve got the general gist. Rocket Arena does without the intense violence, however, trading in bloodbaths for saccharine whimsy and wonder. This is a belligerently family-friendly title, and I don’t mean that as an insult. From the animated characters awash with subtle details, to the creatively designed arenas themselves, Rocket Arena is a game awash with childlike awe and imagination.

Perhaps I’ve grown weary of all the dark, cynical worlds populating games of late? Maybe I needed something a little sweeter in my life? Either way, the art and design in Rocket Arena is so damned wholesome I was immediately taken in by the whole affair. The ten characters on offer are all colorful personalities, from the bubbly undersea explorer Amphora, to the stalwart old rocketeer Topnotch, each with a unique kit and, of course, rockets. 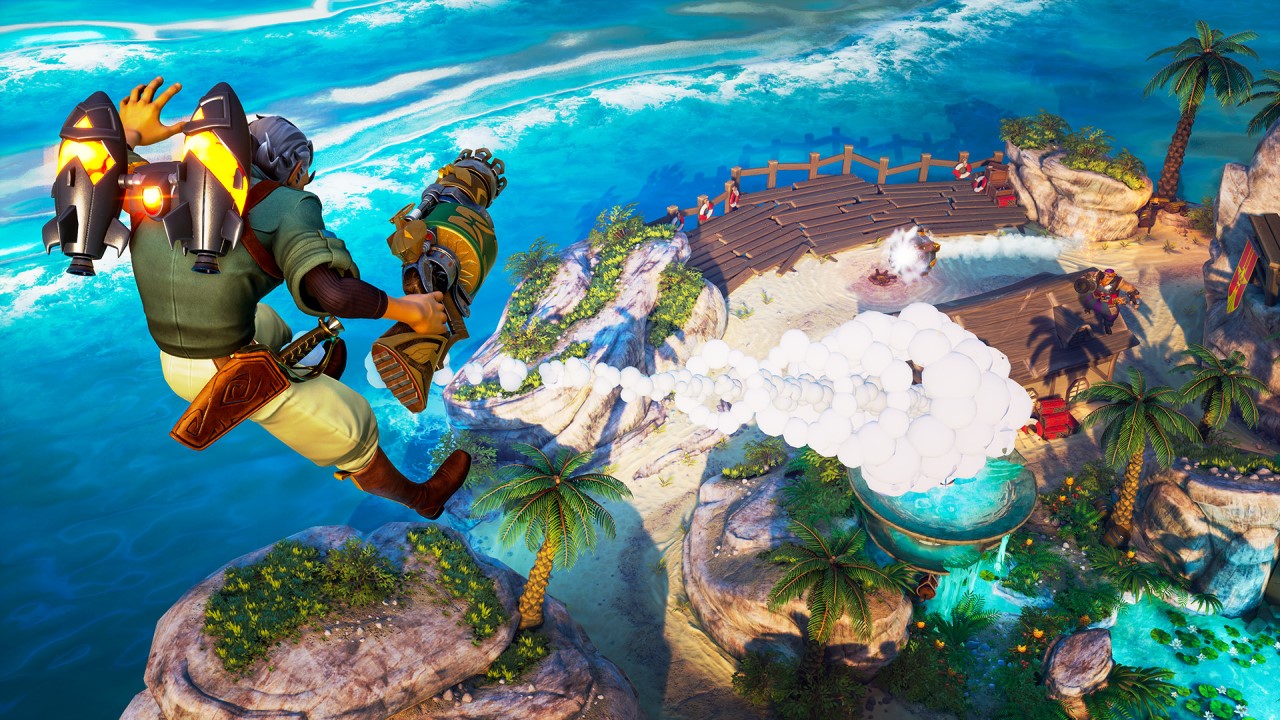 Though, I should say “rockets”. Final Strike Games wasn’t content with equipping everyone with a one-and-done rocket launcher, so the array of weapons available are largely creative interpretations. Boone uses a shotgun that fires micro-missiles, or a single giant rocket when scoped-in. Mysteen uses, well, literal playing cards that also happen to explode. While some of the archetypes may not be the most unique around (Blastbeard is a pirate that wields a, you guessed it, cannon), there’s an abundance of imagination found throughout the roster.

A hero-shooter lives and dies by its roster, so its heartening to report Rocket Arena absolutely nails their initial ten rocket-fueled heroes. Each fills a certain playstyle niche, and none felt overtuned or overpowered (except perhaps Plink, with his rapid fire missile volleys that never seem to end). There are also Artifacts for players to unlock and level that can be equipped to each of the characters that augment their playstyle in some way – from more movement speed on the ground, to extra knockout damage – lending a little creativity to how players interact and build each. Even the assortment of maps felt well-balanced, for the most part.

These are tiny – and I mean tiny – arenas where players come together in teams of three to knock the opposing team out of the arena by filling their blastoff bar before landing that final mega hit that catapults them out of bounds. No one actually dies in Rocket Arena; rather, they gently float back down and resume the fight. Honest opinion: I adore this quirk. Not because it’s a non-violent way to handle defeat; the gentle glide back never once pulled me out of the battle. There is something weirdly soothing about not staring at a respawn screen between “deaths” is what I’m saying.

Each map has its own little corners and hidden alcoves for players to discover and utilize for smart counter-play, and if you’re ever caught out in the open you can nimbly dodge incoming rockets with the press of a button (though this evasive maneuver has a cooldown). Fights easily take place on both the ground and in the sky, thanks in part to the vast array of mobility options found among the cast. Topnotch has a Pharah-style jetpack that allows him to hover for a brief time, but leaves him vulnerable. Kayi can zip across the arena with her grappling hook to escape a tussle. Each map is designed to allow each character a moment to shine, and by-and-large they’re all fun to skirmish within. 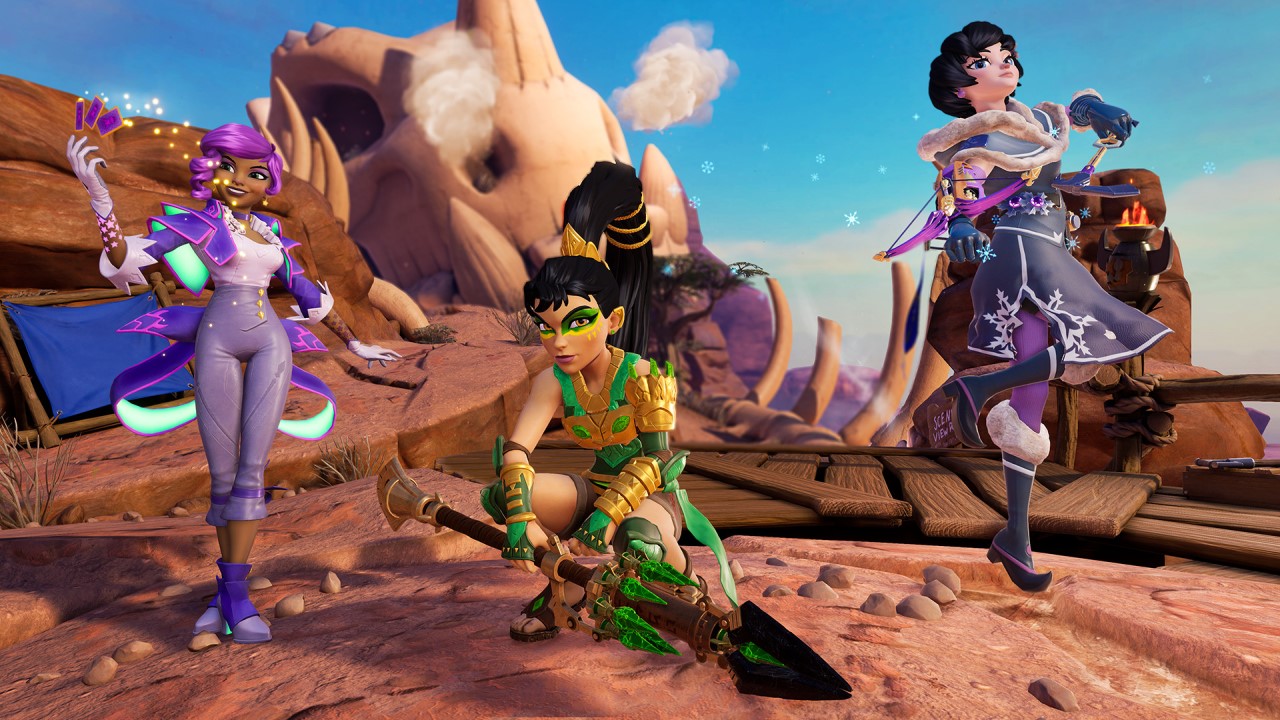 The only caveat to this are the various gamemodes on offer; some simply play better than others on certain maps. The “capture the hill” mode, Mega Rocket, works well when the point is out in the open, but when it spawns within a small, contained area all Hell breaks loose as the resulting bombardment of rockets and splash damage ejects any and all players bold enough play the objective out of the arena again and again.

There are four gamemodes (Knockout, Mega Rocket, Treasure Hunt, and Rocketball), and none of them are outright bad. Rocketball is perhaps the weakest of the bunch, because it’s not difficult to saunter over to a capture point and score. Knockout is easily the marquee mode on offer (it even has its own dedicated playlist), and as the title implies the simplest: knock enemies out of the arena to win. They’re a fun list, all said, but some additional curation across the maps for each would go a long way.

At launch there is already a casual and a ranked queue, and I didn’t have much issue finding a match in either, though I’d wager the well implemented crossplay had to do with that. Needless to say, there’s a decent amount of variety on offer here, though the basic loop does grow a little tiring after a few hours of play. Rocket Arena works best in short bursts, because no matter how you play it, every match pretty much boils down to punting your foes out of the arena.

I’ve already gushed over the art style, so allow me to say the graphics themselves hold up well. I was largely reminded of the recent PS4 Ratchet and Clank titles, where the stylized design was decently augmented by solid specular lighting and reflections, crisp textures and anti-aliasing, and a wonderfully varied color palette. Rocket Arena isn’t going to “wow” anyone, but it looks sharp, and ran without a hitch on my Xbox One X.

Audio also fares well in Rocket Arena. Spatial sound wasn’t fantastic, but still worked well enough to inform me on enemy positions. The characters are voiced well (the constantly upbeat chirps may grate on some), though the weapons could use more bass and “oomph” to them. These are rockets after all, and while they may not pack the same destructive power as The Soldier’s launcher from Team Fortress 2, and little extra explosiveness in the audio wouldn’t go unappreciated.

Rocket Arena has plenty of charm, a quality roster of heroes to play as, and is a technically competent game. While it may not possess any great depth, it’s a fun game to waste an hour or two on here and there. It would be the perfect free-to-play game for families with younger children looking to get into gaming, but it isn’t. While I’m not one to tell publishers or developers how to monetize their games, I fear Rocket Arena will ultimately struggle in today’s market. 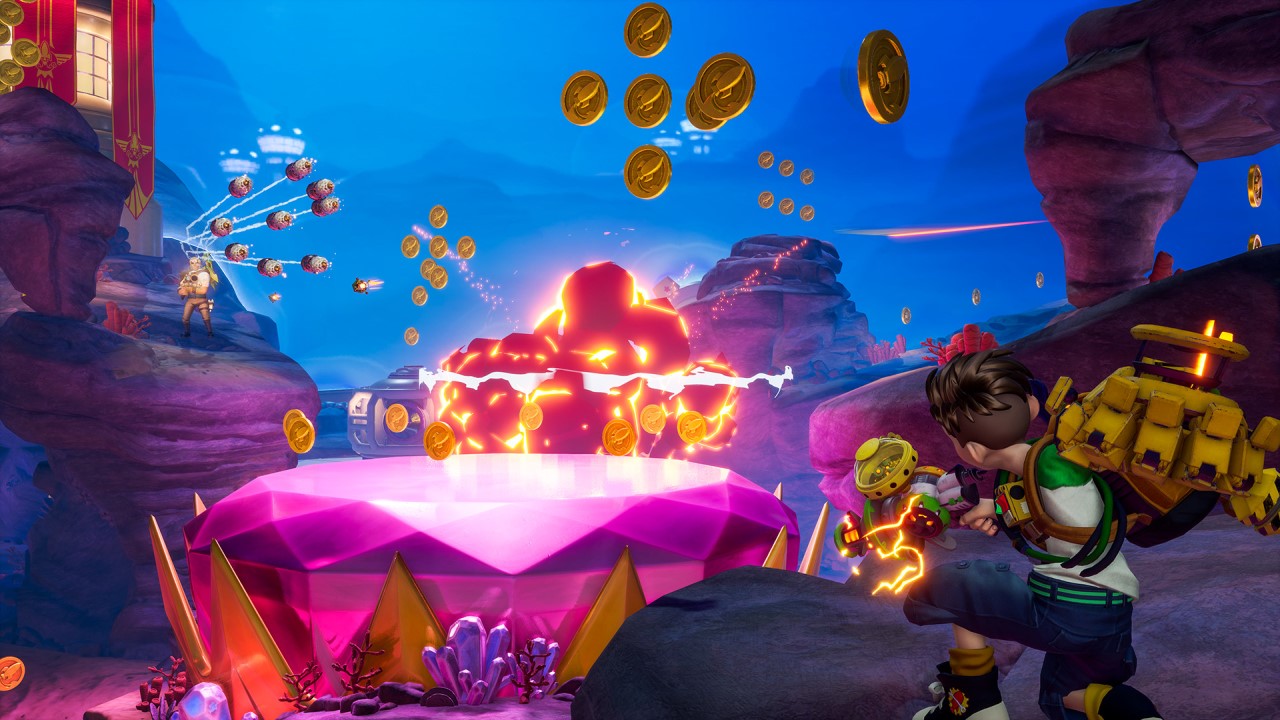 Free-to-play monetization with a box price.

Rocket Arena has the standard array of free-to-play cash sinks we’ve come to expect these days. There’s a Battle Pass up for preorder, and a full cosmetic shop where skins can be purchased with either the real-money “Rocket Fuel” currency, or the in-game “Rocket Parts” earned from leveling and completing challenges. In a blind taste test you’d be forgiven for thinking Rocket Arena was indeed a free-to-play title: it has the monetization, it fits within the crowded free-to-play market, and it’s seasonal approach encourages recurring play and investment.

Problem is the game has a $30 price tag (for the base game). I want to reiterate that I’m not one to tell a developer or publisher how they should sell their game, but attaching a box price to Rocket Arena feels like a bad idea to me. This is a new franchise that fits within the free-to-play market, but with a paywall for entry. Sure, most of those games are battle royales, but the game is clearly aiming for a younger market, and they gravitate towards games they can play without paying a dime. It’s almost like kids don’t have a source of income, mom and dad’s notwithstanding.

Throw in the battle pass and cash shop, and in many ways it feels like Rocket Arena is over monetized. Yes, you can purchase the cash shop items with in-game currency, but it often appears like the game was designed to be free-to-play from the start before someone made the executive call to sell it for $30. And, loathe as I am to admit this, fun as Rocket Arena may be it doesn’t feel like it’s worth $30.

I voice this concern, because I fear the game will wither on the vine due to this choice. It’s only been a couple days since launch, yet the Steamcharts for Rocket Arena are already concerning. While it may be available on other platforms and launchers, I firmly believe this game would have a larger player population had it been free-to-play (and maybe if EA actually marketed it). It plays and feels like a free-to-play title, it’s monetized like a free-to-play title, so why is it being left to die behind a paywell when it could damn well flourish as a free-to-play title? 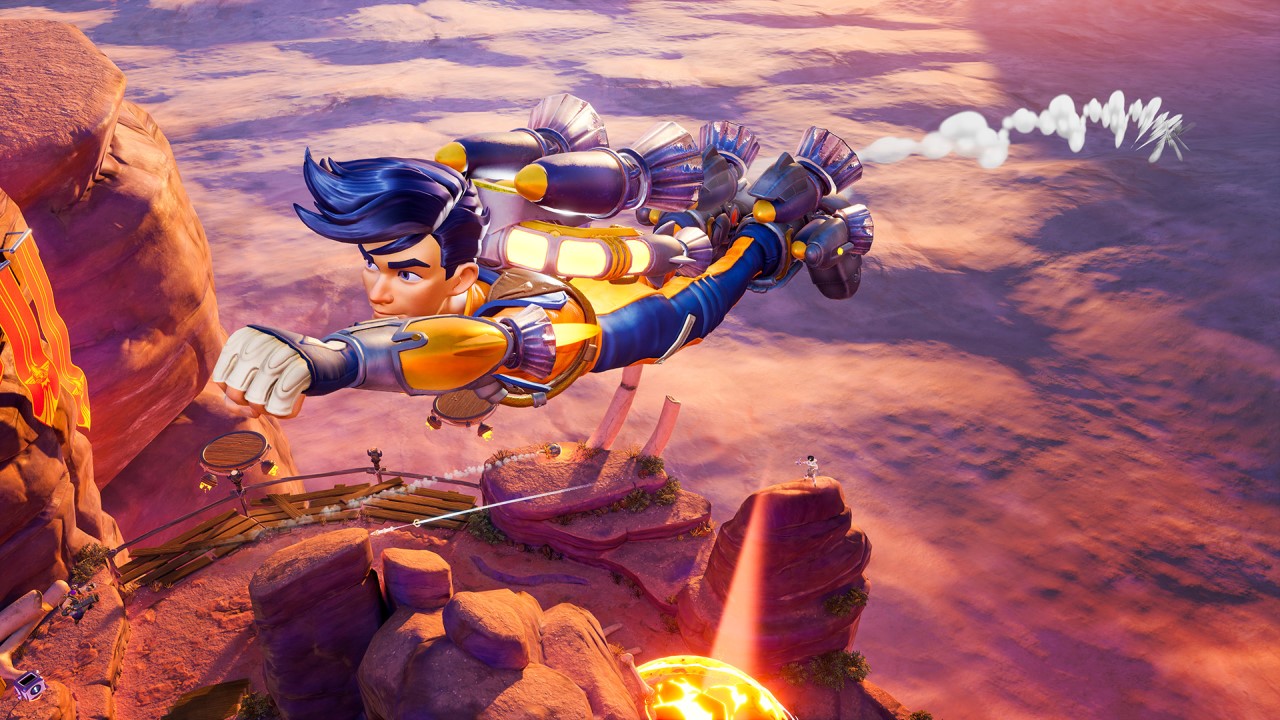 Which, brings me to the portion of this review I was dreading. I want to recommend Rocket Arena. It’s an objectively good game that may be simple in execution, yet is ultimately enjoyable in bursts. Its focus on rocket-fueled antics and use of knockouts give it a unique, if somewhat gimmicky appeal. Rocket Arena is a fine game, and the final score will reflect that.

But, the $30 pricetag and already dwindling player-population has me afraid for its future. Final Strike Games have a roadmap to update the game with additional characters, maps, modes, and more, but with no one around to play them Rocket Arena may implode well before those goals are met. Rocket Arena is a fine hero-shooter with a novel twist on the formula, and I absolutely dig its “World of Tomorrow” aethestic, but unless it drops the box price and goes free-to-play the competition will knock it out of the arena; that’s just the nature of today’s market. If it does then play Rocket Arena, but until then you may be best served spending your money elsewhere.