Does Valkyrie Elysium manage to ascend? 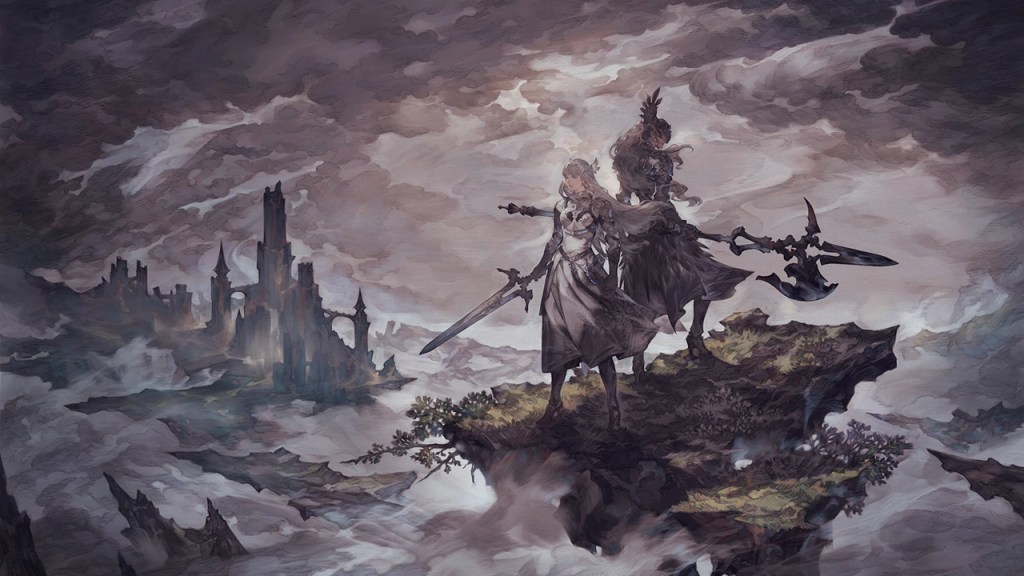 When Valkyrie Elysium was first revealed, it’s safe to say that the game did not manage to win the hearts of fans straight away, as many were unsure and not sold by the game’s aesthetic, the change from the franchise’s known battle system, and the title’s overall presentation. But were those fears justified or did Soleil and Square Enix manage to put them all to rest?

First of all, it’s important to point out two things, starting with the fact that the game is not a sequel to the Valkyrie Profile storyline. This game instead acts as its only standalone title. It is also crucial to point out that although it’s an Action-RPG, Valkyrie Elysium‘s core gameplay and overall style are way more similar to the ones seen in hack-and-slash franchises such as Devil May Cry and Bayonetta, which can be seen in both the game’s structure and overall level layout. So if you are not a fan of the style, ii’s safe to say this will not be the game for you.

A Fun and Intuitive Combat System

With that out of the way, although the game features a solid and heartwarming — although somewhat bland — main storyline, the true star of the show is its combat system, which allows you to take control of the Valkyrie as you face hordes of enemies all while accompanied by your Einherjar. In combat, you will be able to summon each Einherjar by spending your Soul gauge. They will stay on the field for a set time and will wield a specific/non-changeable weapon. Each Einherjar is also capable of performing two abilities when in battle, both of which can be changed at will. The Valkyrie, on the other hand, will be able to select up to 4 Divine Arts and carry up to two different weapons when in combat.

To put it simply, the combat feels fresh thanks to both the game’s Soul Chain mechanic — which allows the Valkyrie to pull herself towards targets — as well as the wide array of combo possibilities, high degree of movement freedom, and the fact that the Einherjar can synergize with Divine Arts of the same element to fully enhance them. That does not mean that the system does not have its flaws, however, as the game features the same problems included in many other action games. This can be seen in its repetitiveness and in the instances where the camera will simply go haywire, forcing you to step away from the combat. 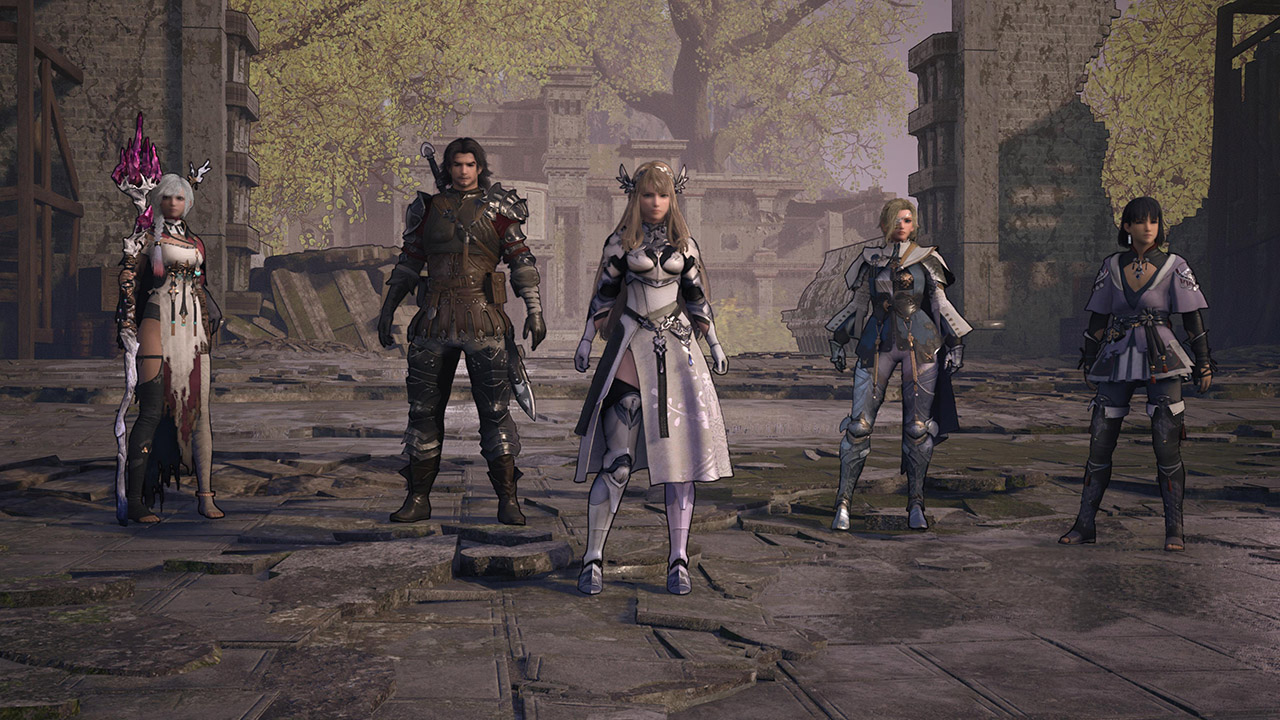 The Soul is Still There

The game’s JRPG roots do not show themselves only in the use of the Divine Arts and items while on the field, as the Valkyrie also has three distinct skill trees. Upgrading each tree will allow you to get new moves, passive abilities, and further increase your stats. As we mentioned above, the Valkyrie is also able to simultaneously equip up to 2 of the game’s 8 available weapons (including the game’s Digital Deluxe Edition and pre-order bonuses) which range from the standard shortsword to a dual staff capable of mixing both magic and melee. Although mastering each weapon takes time, challenging yourself by attempting to finish the game while only using set weapon combinations can be extremely fun for those to up the task.

The game’s progression system is also a great fit. Although you can increase the Valkyrie’s stats and skill repertoire by finding items and unlocking nodules on their respective branches, you can only increase your Einherjar stats by actively using them in combat, while new abilities can only be unlocked by completing their series of side-quests. As using each Einherjar expends Soul (the game’s equivalent to Mana), the feeling that they will grow stronger the more their fight alongside you is extremely rewarding and really enriches the experience. 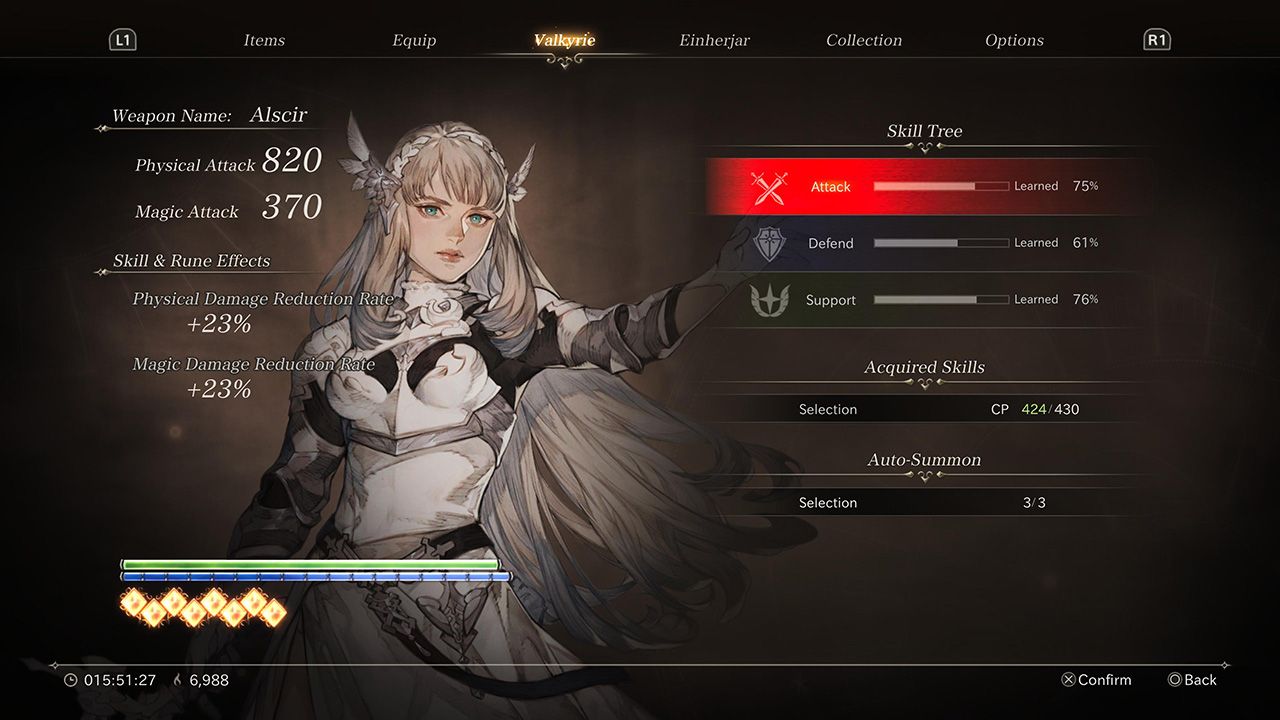 A Little Short of True Greatness

Another one of the game’s biggest strengths lies in its main party, composed of the Valkyrie and her four Einherjar. But unfortunately, that also highlights another one of the game’s shortcomings, as its plot, although solid, does not manage to truly scratch the potential of its characters or to add real depth to some of its moments, instead staying fully reliant on their charisma and in a few small moments to create a true connection.

For some, the game’s duration may also be a downside, as each main chapter can be completed in around 1 hour if you steadily explore each area. Otherwise, they can be completed in most cases in around 30 minutes each (while skipping encounters and cutscenes). The game also features a wide array of subquests, all of which follow the same formula. All subquests can be completed in around 5-20 minutes each, but the game does not allow players to accept more than one at a time. The lack of an option to be able to enter and exit previously completed chapters while keeping your findings at will is also felt, especially when hunting for collectibles, as it can force you to fully complete a chapter for what can be, in many cases, an item featured in its first half.

With that said, we know that the duration of the title may be seen as let down given its price. But its straight-to-the-point style may be ideal for those who just want to play a quick title to unwind or for those looking to take a breather after beating a massive game, a feeling we JRPG fans know all too well.

Last but not least, although it was clear that Valkyrie Elysium had not been given the usual budget featured on other Square Enix AAA titles, the game is undoubtedly beautiful, featuring highly detailed character models based on designs by Yuya Nagai and great combat animations which are showcased not only by its fast-paced combat style but also while performing all kinds of Divine Arts. As usual for the franchise, Motoi Sakuraba returns as the main person responsible for its soundtrack, which is, in true Sakuraba fashion, a highlight.

With that said, the game does feel half-baked in a few areas, which can be mostly seen in the game’s lip-sync, its stiff facial animations, and in certain cutscenes where the characters appear to be completely out of place in the environment.

Overall, Valkyrie Elysium is a great, though rough around-the-edges, action RPG whose biggest strength lies in its dynamic combat system and in the charisma of some of its characters.

Although the game suffers from a pretty obvious lack of content at launch given its relatively short main storyline, short side quests, and the absence of additional modes, Valkyrie Elysium is a safe bet for fans of the genre, those who have longed to return to the universe of the series, and those who are looking for a great entry point to the franchise.