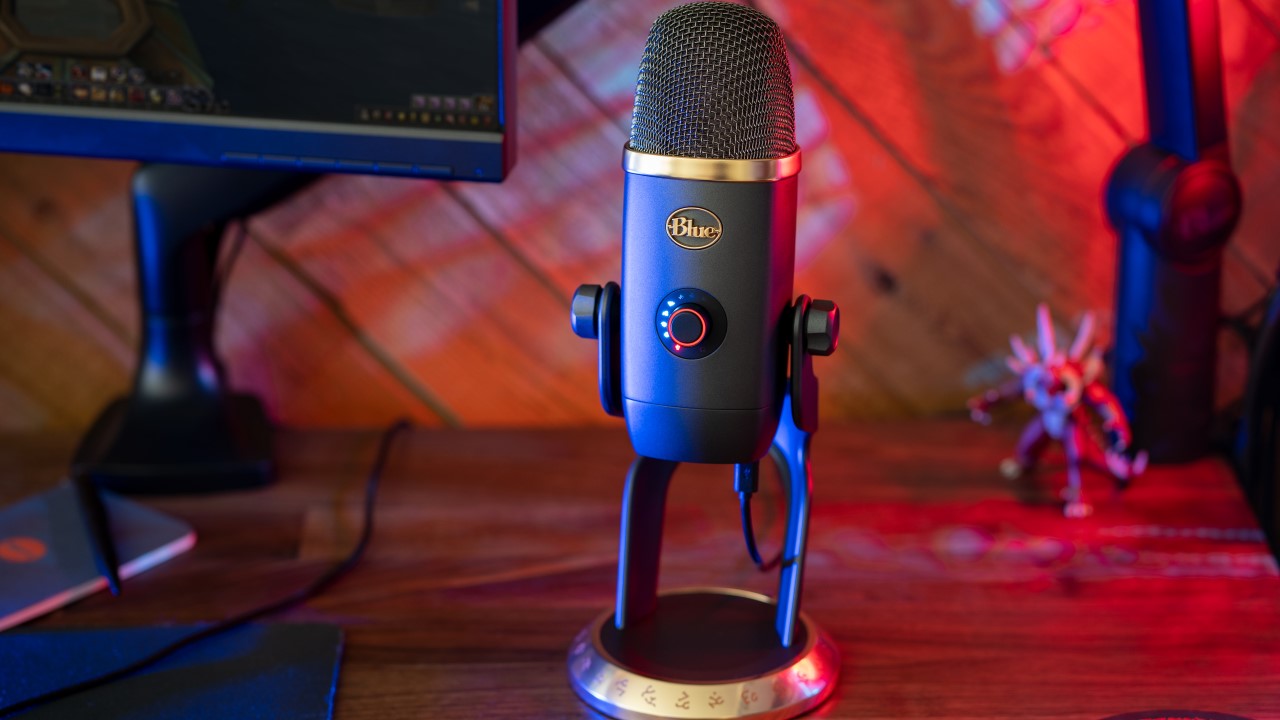 Blue’s Yeti is easily the most popular USB microphone out there.  Podcasters, streamers, YouTubers, and even regular people not interested in content creation have been using Blue’s standout mic for years, so it came as no surprise when Blue and Logitech released an enhanced version of the Yeti last year. The Yeti X has an extra mic capsule, greater bit-depth, and a sleeker design, all bolstered by the excellent Blue VO!CE app. It’s $40 more expensive than the ole Blue Yeti ($170 instead of $130), but it easily justifies its more premium cost.

The Yeti X: World of Warcraft Edition is the same microphone as the stock Yeti X, but with a few twists.

The first thing prospective customers will notice is the Yeti X: World of Warcraft Edition’s slightly altered appearance. Instead of a glossy black case with silver highlights, the Yeti X: World of Warcraft Edition is a matte “Battle Grey” with golden accents. It sounds garish, but it’s actually quite slick in execution. The matte finish also means you’re less lucky to leave smudgy fingerprints all over the mic as you adjust it, which is a subtle, yet appreciated perk.

The gain and mode-select buttons are still plastic, but the dynamic 11-segment LED meter on the gain knob has been given a minor facelift. Instead of the general round LED’s found on the standard Yeti X, the World of Warcraft Edition has runes. They’re not so overt as to draw attention away from the microphone’s sleek finish; they standout just enough to further mark the World of Warcraft Edition’s unique flair.

These same runes are engraved around the base of the stand that comes stock with the Yeti X: World of Warcraft Edition. The stand is same design as the standard Yeti X’s, yet with the “Battle Grey” finish and gold highlights as the microphone. The engraved runes as a lighter gold, allowing them to gently blend in with the rest of the design. Finally, the World of Warcraft logo is on the back on the microphone itself, underneath the selector knob.

The Yeti X: World of Warcraft Edition microphone avoids the more ostentatious design language other similar sponsored products tend to abuse. It stands out, sure, but the overall aesthetic remains professional and easy on the eyes. It may not be enough to sway regular Yeti X customers to make the additional $30 splurge, but World of Warcraft fans and content creators will adore the microphone’s clean, crisp look. 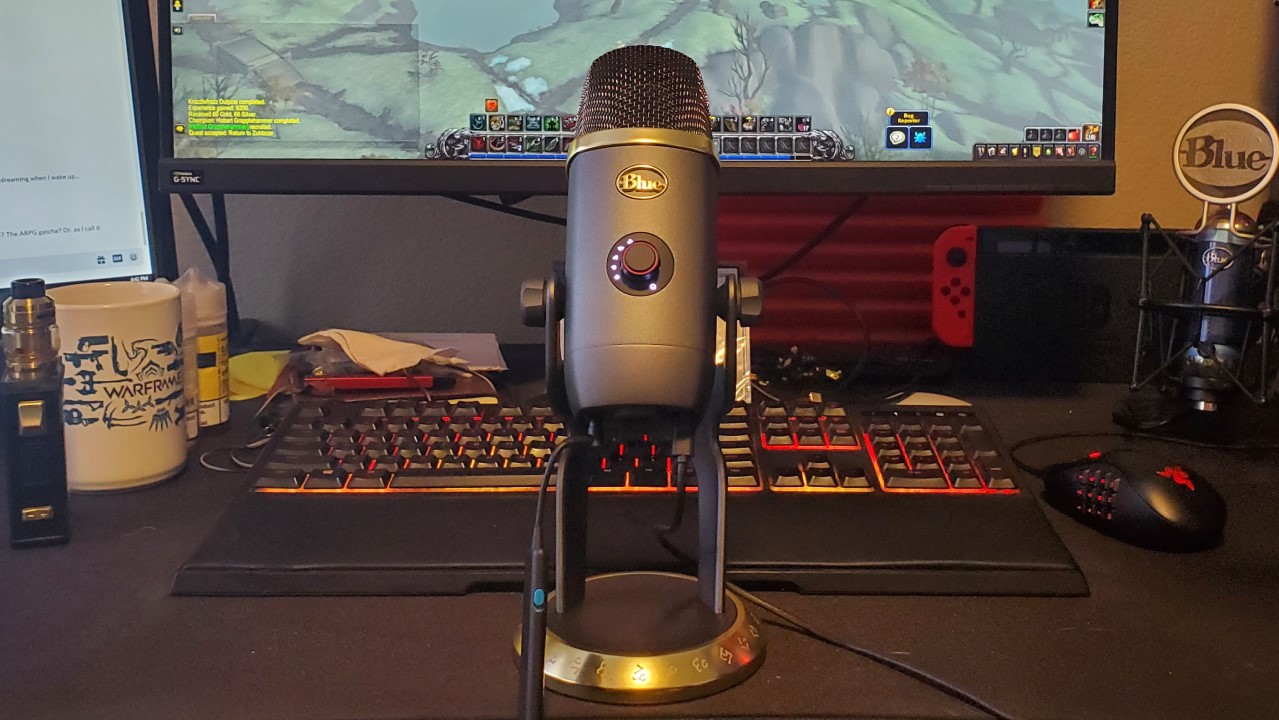 This being a Yeti X means there’s more to it than just the microphone alone. Blue’s VO!CE software is supported out of the box, to include all the stock presets that exist for the standard Yeti X. Honestly, this program is the real reason you’re paying more for a Yeti X over a regular Yeti. Without any filters or effects enabled the Yeti X doesn’t sound that drastically different than the Yeti to the untrained ear. Even my former Blue Spark Digital produced similar results. But, throw in Blue VO!CE and the Yeti X can deliver superior quality thanks to the variety of tools available.

You can set noise-gates and noise reduction, alter your compression and EQ, and more within Blue VO!CE, cutting much of your post-work out of the equation if you record for YouTube or podcasting. Whatever you set in the software carries over into your various applications, so even basic Discord conversations benefit. Throw in a healthy amount of presets and the bevy of custom community generated settings available, and you may not have to tweak any of the settings individually yourself. Though, if you want to do the work, the app comes with a helpful record and listen function that allows you to generate an unmodified 30-second clip that you can then preview as you alter the settings to your liking.

There are a few options aside from general voice effects, such as voice modulation, pre-baked audio samples, and lighting adjustments for the dynamic LEDs around and within the gain knob. This is where the Yeti X: World of Warcraft Edition’s exclusive features can be found, and they’re a bit of a mixed bag. Owners of the World of Warcraft Edition will have access to a handful of voice modulation effects based on some of Warcraft’s most iconic races and creatures, as well as large selection of audio samples. Granted, you’ll need a Logitech G HUB compatible mouse or keyboard to take full advantage of these options, but that’s not too much of a shock (Logitech wants you to own additional Logitech products? For shame!).

The voice modulation is . . . okay, to be blunt. The stock modulation effects for the Yeti X are fun, sure, but none of them are outstanding. The World of Warcraft effects are similar, though arguably a little rougher around the edges. Each option has a hard mechanical tinge to it, and some sound astonishingly similar to each other (the Worgan and demon come to mind). I’m not saying they’re bad – content creators and streamers will have plenty of fun with these, for sure – but they aren’t worth the extra $30 on their own.

The HD audio samples are better, but like voice modulation they don’t have much use outside very niche scenarios. But, that’s kind of the whole point, now isn’t it? Yeti’s are predominately used by streamers and YouTubers, who benefit more from quality audio samples (and even voice modulation) than the average user. Between the extra bits within Blue VO!CE, to the Warcraft inspired design, it’s not really up for debate who the Yeti X: World of Warcraft Edition microphone was created for. 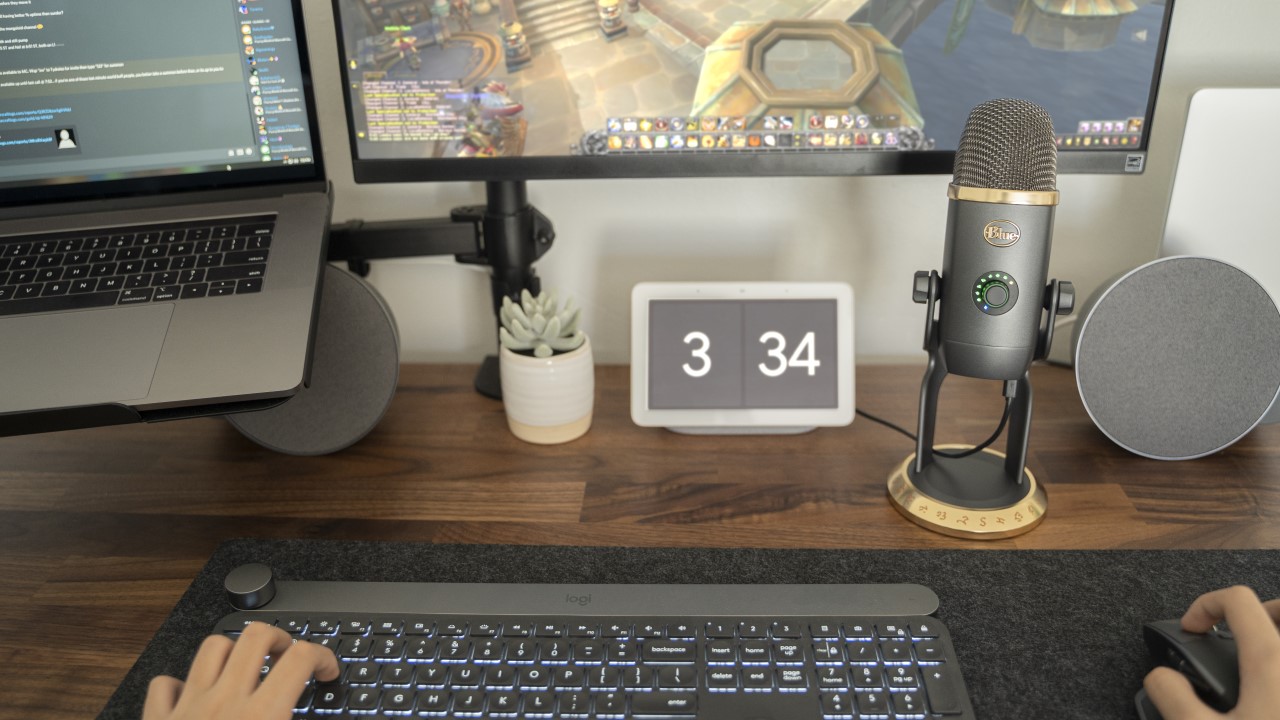