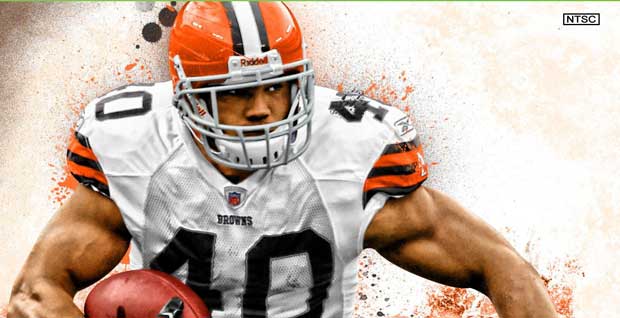 Hot on the heels of the announcement of this years cover athelete, Peyton Hillis, the first gameplay trailer for Madden NFL 12 has been released. What better time to showcase the new features of Madden NFL 12 then while football fans are slobbering over who their favorite teams have picked up in this year’s NFL Draft.  To the lay person that doesn’t play Madden games, the gameplay looks pretty similar to last year’s version of the popular (only) football title.

To more seasoned players, EA announces that there are quite a few upgrades to the game as you can see in the trailer below.  Some bullet-points include:  new collision animations, new defensive coverages, finer gameplay details, increased ball physics, and plenty of tip toe sideline grabs.  It was also recently revealed that Peyton Hillis will be the cover athlete of the title, so you can expect him to follow up his break through 2010 season with a career shattering injury around week three, give or take three weeks.

As of this writing, a judge has awarded the NFL owners the right to initiate the lockout period again, so there may not be any football whatsoever in 2011.