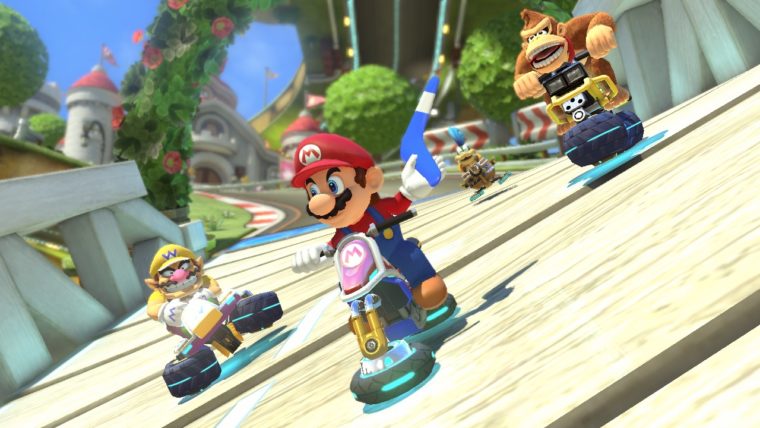 Mario Kart 8 is due out next month for the Wii U, and Nintendo has revealed a bunch of new media for the upcoming game. The latest screenshots, trailer and accompanying press release detail some of the features for the game, which includes new track designs which incorporate the game’s anti-gravity features, 12-player competitive play, local multiplayer, hang gliders, underwater racing, and motorcycles.

Nintendo outlines some of the other new features, below.

Spin Boost: While racing upside down or on walls, players can bump into other racers or certain track obstacles to get a speed boost. The Spin Boost fundamentally redefines the way that players compete, and makes anti-gravity racing even more exhilarating.

Returning Characters: In Mario Kart 8, players can race with returning characters Metal Mario, Lakitu and Shy Guy. These newly revealed returning characters join a host of previously announced favorites, including all seven of Bowser’s Koopalings, who are playable for the first time in video game history.

New Items: Two new items join the fray in Mario Kart 8. First, the Piranha Plant attaches to the front of the player’s kart and chomps at other characters, banana peels on the track or even shells thrown by other characters. Each time the Piranha Plant lunges forward to bite, the player receives a brief boost of speed. The second new item is the Boomerang Flower. After acquiring it, racers can throw a Boomerang at opponents to stun them, and its arc allows players to strike multiple opponents with a single toss. The Boomerang can be thrown three times – forward or backward.

Control Scheme: Mario Kart 8 will support a variety of control schemes, including the Wii U GamePad, the Wii U Pro Controller, the Wii Wheel and the Wii Remote and Nunchuk. The game can also be played in off-TV mode using just the Wii U GamePad.