Rachet & Clank: All 4 One Releases on October 18th 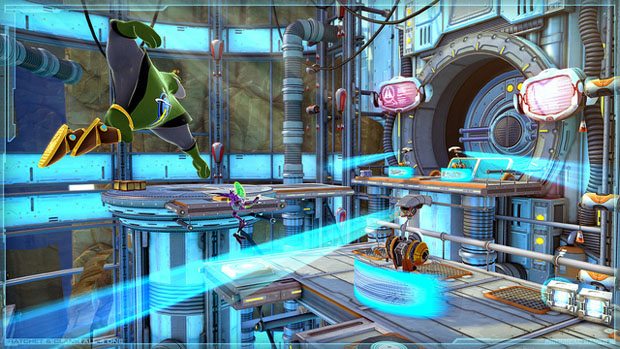 Rachet & Clank: All 4 One will hit retailers on October 18th, 2011.  This PlayStation 3 exclusive was created by Insomniac games, and will introduce four player cooperative play to the franchise for the first time.  The cooperative play as described Insomniac is CAKE.  Cake is an acronym for Cooperative, Active for all Players, Kinectic, and Easy to Understand.

Sony’s Rey Guitierez interviewed Mike McManus of Insomniac detailing the newest feature to the game. As usual the game has a wide variety of strange and interesting weapons that are usable in the cooperative mode.  Have a look at the video below for your first look at the coop of the game, plus Dr. Nefarious working with the good guys.

Sony also recently announced a partnership with GameStop, Amazon, BestBuy, and Wal-mart that will each offer pre-order incentives for the game.

Mr. Zurkon (GameStop): Asmall, hovering synthenoid, Mr. Zurkon aids your team in battle by attacking enemies with his mounted laser while insulting and taunting them with his comedy-insult logic processor.

T-Rex Morph Mod (Amazon): Turning enemies into farmyard animals not your style? Want a more prehistoric take on the Morph-O-Ray?  Use this T-Rex Morph Weapon Mod to transform your enemies from dangerous threats into a baby dinosaur.

Pyro Blaster Unlock (Best Buy): Fry your enemies up with this Kerchu-engineered flamethrower that offers your enemies two choices: regular or extra crispy!

Sheepinator Mod (Wal-Mart): The classic version of everyone’s favorite Ratchet & Clank weapon is back!  Unlock the Sheepinator Morph Weapon Mod to transform even the fiercest aliens in the galaxy into harmless sheep.

Look for this in mid-October exclusively on the PlayStation 3.