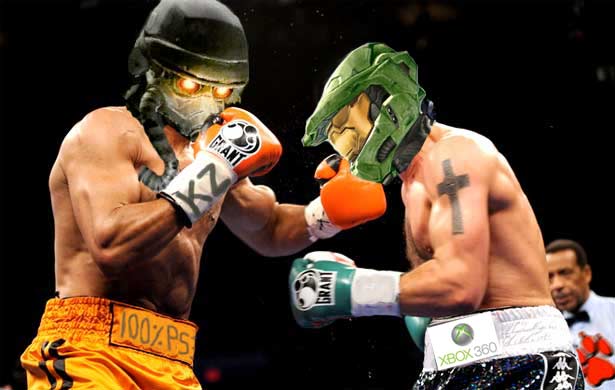 What does maxing out a console really mean?  Is the 360 maxed out yet?  How about the PS3? Now on to my point: Have you noticed that every year some game developer announces that their upcoming  game has “maxed out the console,” yet games continue to look and perform better every year?  It doesn’t make much sense, we can agree on that.   Still, such comments never fail to get gamers into a feeding frenzy. It works. But wait a minute! Didn’t they say the same thing a year ago?  To help address my questions, here is an old, well used, yet great quote by Naughty Dog:

“Any developer who gives you a “percent of system used” answer is blowing smoke. The truth is that every developer uses 100% of the systems power on every game. Some just get more out of that 100% than others. And game after game, we ALL get more out of systems than we did on the previous title.

Think of it this way. If the system is a glass, some developers pour in rocks till the glass overflows and then call it quits. They would claim that they use 100% of the systems space. And it is true that no more rocks fit. Some will even put in a rock too many and the game plays slow or runs funny. But there is still some space left for smarter developers. They pour pebbles into the cracks left by the rocks, and they get more into the glass. Then they call it 100% full. But some Developers will then pour in sand, to fill the cracks between the pebbles. They get even more out of the system, yet it is still just 100% full. Some developers go the extra distance, and they pour in water. Then the glass is truly full, right? Sure, but just for this title, because some of the rocks can be replaced with pebbles that do the same thing, if you work hard at it. And some of the pebbles can be made into sand. And some sand can be pressed to water. No developer ever gets a glass filled with only water, no developer has that much time, so no developer truly fills the glass

So in the end it is not a matter of how much system power you have used, but how efficiently you use it (that’s what she said…). Hardware is not getting better on the PS3/360/Wii, but knowing how to write code to more optimally use the set hardware resources is improving constantly.  That being said, when you hear people claiming “Killzone 3 uses 100% of the PS3’s power” or “No other engine could handle Crysis 2”, stop, take a deep breath, and don’t believe the hype.  Resist the marketing jargon. Maybe the hype machine is right, maybe their title is using “100% of the system,” but remember that this is an empty statement and coding can always be improved.  Judge the game/graphics for yourself when the game is ACTUALLY RELEASED.

One last thing to think about is the hypothetical situation where all code is fully optimized on a console… thus truly “maxing out a console.” As time goes on this gen, I fully expect developers to get closer to this goal. I expect Killzone 4 to outperform Killzone 3, Crysis 3 to outperform Crysis 2, Gears of War 3 to outperform Gears of War 2, and Uncharted 3 to outperform Uncharted 2.  But as developers get closer to this hypothetical limit, the improvements will be evolutionary, not revolutionary. I suspect developers are pretty close right now. For example, don’t expect anything to blow Uncharted 2 out of the water (although the hype machines are in full force at the moment…), even if they do top it.  Also remember that in this hypothetical situation, there would be limited resources to spread between things like resolution, AI, frame rate, textures, lighting, effects, sound, etc.   One game may very well be tops in graphics… but at a cost to other elements. And we all know that graphics aren’t everything.

Now that we have all (hopefully) learned something, or at least had a refresher, I will finish with a controversial question: Which console do you think is closer to being “maxed out,” the 360 or the PS3?

My opinion is that the Xbox 360 is closer to being maxed out.  Why?  Because historically it has been the easier console to develop for.  Architecture for the 360 was easier to wrap heads around, and thus developers had more early progress on the 360, thus it was closer to “maxing out” and optimizing code earlier in its life cycle.  I would argue that history supports this view because on average, early multiplatform titles had the graphics/performance edge on the 360.    Developers struggled with the PS3 early on (especially multiplatform), so they were far from maxing out.  Plus, it is my subjective opinion that first party titles on the 360 have made less progress over the years as compared to PS3 first party titles, thus suggesting that code may be closer to optimization on the 360 than the PS3.  Remember, 1st party exclusive games really SHOULD be the benchmark for state of the art coding at any given time.

To throw salt in the wounds of the 360, I also predict that once we approach the hypothetical point of 100% code optimization (“true maxing out”) on the 360 and the PS3, you will find that PS3 games are more impressive overall in the numbers game.  Why? Although the 360’s graphics processor appears to be the stronger of the two, the Cell processor of the PS3 appears to have more headroom than the 360… at least as far as theoretical number crunching goes.  Thus, assuming a hypothetical optimal coding situation in both cases, the PS3 should win due to pure hardware overhead.  People have predicted this for years.

But lets slow down… things are not that simple.  So why are the 360/PS3 games still at comparable levels these days?  As mentioned above, I would argue that the PS3 is lagging in code optimization compared to the 360 (less so in 1st party AAA titles) in relation to the theoretical “maxed out” limit of the console.  The 360 has not been full optimized either, but again it is closer to that limit… I think.  How close?  I don’t know… and just when we think things can’t get better, I am sure that programmers much smarter than I will surprise us all.  But again, assuming hypothetical optimal coding in both cases, the PS3 should win due to hardware… eventually.  The big question is, how long will it take to get to that point of optimization?  I suspect we will see a new Xbox (and shorlty after PS4) before either console is allowed to fully “max out.” 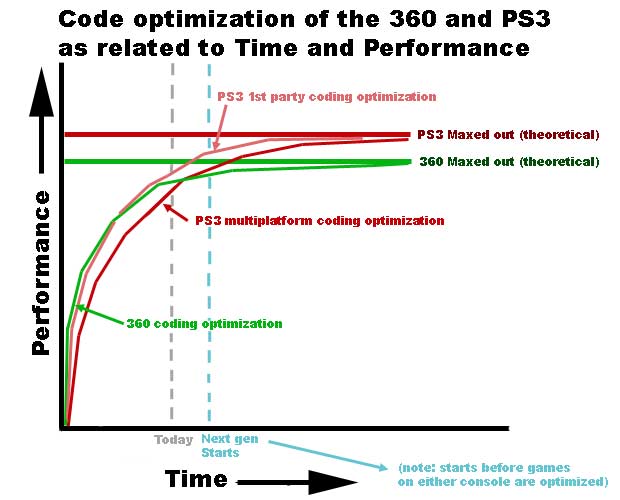