Season 1 is Not Enough to Save Battlefield 2042 Battlefield 2042‘s first season is finally launching on June 9, and what could have been a soft relaunch of one of last year’s most troubled shooters won’t really end up doing much to help the game’s dwindling playerbase. Season 1: Zero Hour brings the usual new content that you’d expect a new season to bring for any online shooter, but 2042 needed a huge hit to kickstart its recovery and pump some life into its veins.

I recently got the opportunity to go hands-on with Battlefield 2042 Season 1, and I walked away from the preview session with a resounding meh. Even ignoring the game’s rocky launch window and players’ already less than favorable opinion toward the game, Season 1 is a paltry offering with hardly anything worth getting excited for, painting a worrying picture of Battlefield 2042’s future.

The first season of Battlefield 2042 adds the following content to the game:

There’s also a new Battle Pass, but the offerings aren’t much to get worked up over. All of the new gear and gadgets are unlocked via the free tiers, and the premium tiers have all the cosmetic items you would expect. None of the skins are particularly exciting, however, outside of one or two exceptions so it’s unlikely that players will feel compelled to grind all the way to tier 100 before it expires. 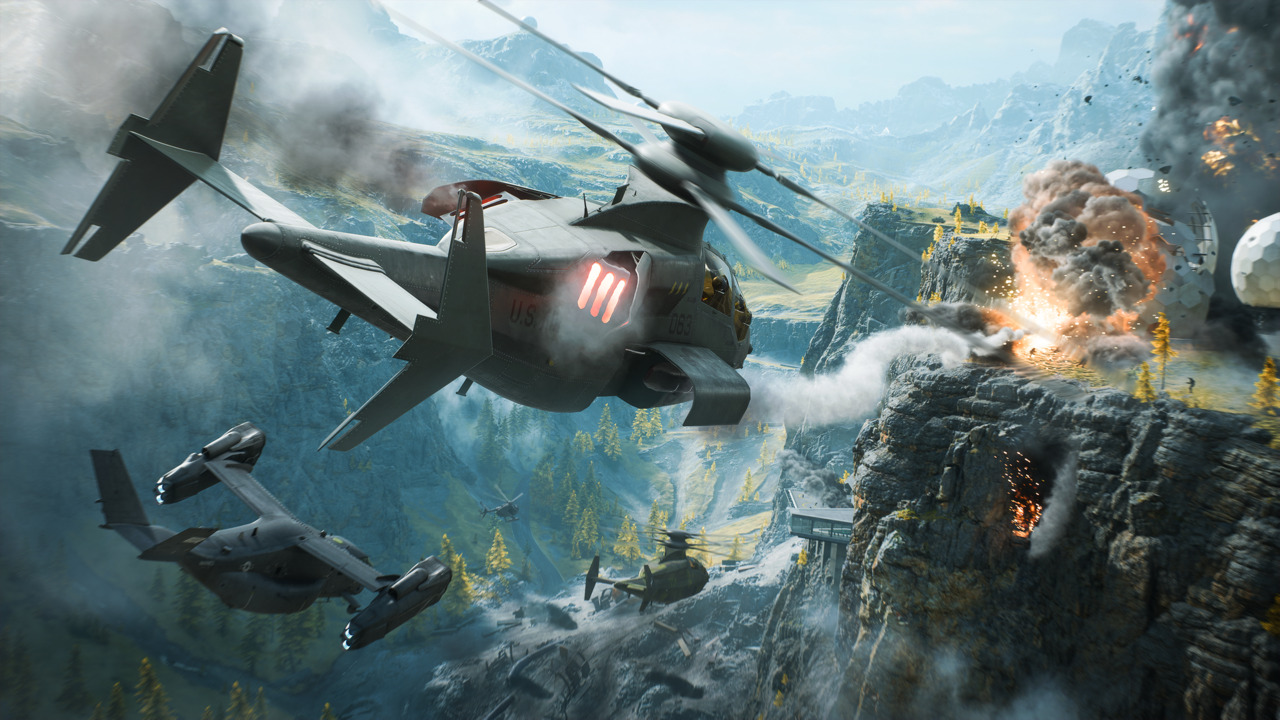 This season would have been criticized had it launched with any other game, and rightfully so given its overall lack of content, but the fact that this is all that DICE has to show after more than half a year since Battlefield 2042 was first released is disheartening. Yes, the studio has been hard at work on reworks and revisions to the game’s core systems since launch, but a game with a budget as massive as this — a game with the word “Battlefield” on the front of the box — deserves more. This update is appreciated, but it’s not enough.

The main new additions are the new weapons, the new Specialist, and the new map. Ewelina Lis is an anti-vehicle Specialist that comes equipped with a special rocket launcher that fires player-guided projectiles. Her gadget is fun to use and does a lot to combat heavy armor and enemy vehicles even if your team doesn’t pack the necessary gear themselves. While it’s not designed to be used against infantry, it can still take out players with a direct hit, meaning you can take out camping snipers if you have enough time to line up a shot. 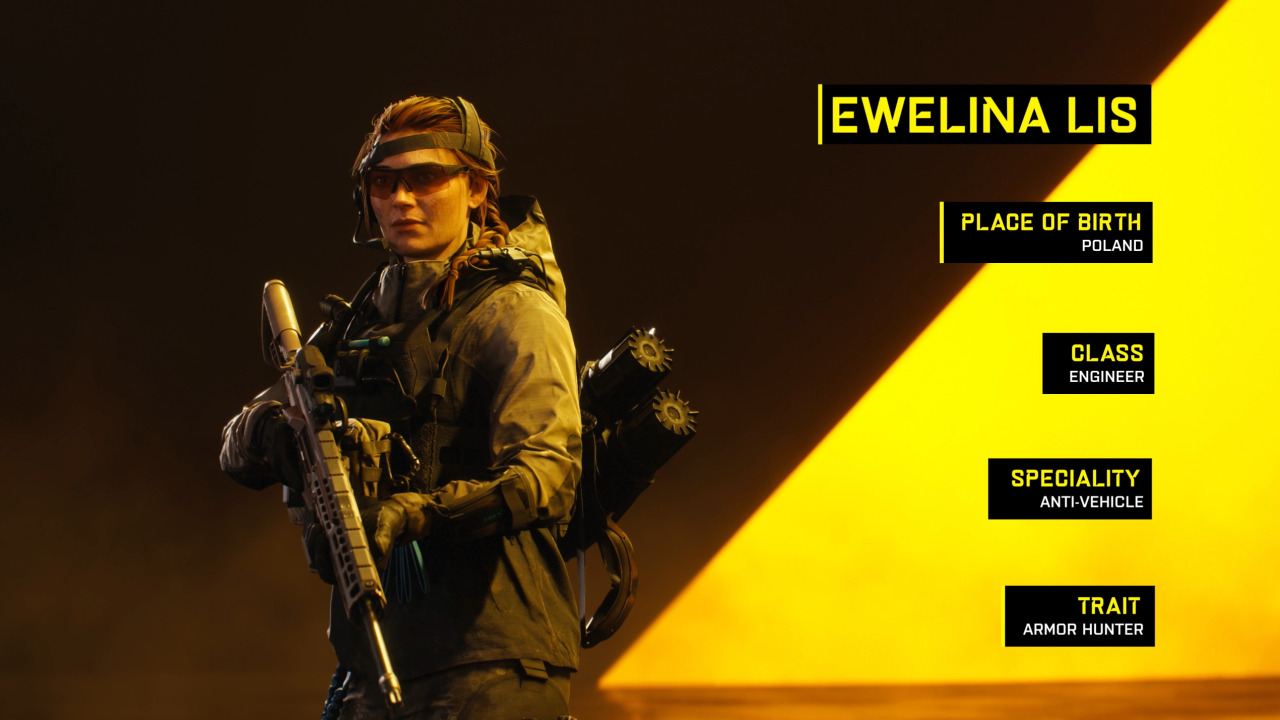 The new map, Exposure, is also easily the best map the game has to offer. Set in the Canadian Rockies, it features extreme verticality differences with one half of the map taking place on top of a giant cliffside with zip lines set up across canyons. There’s a facility located on the upper half of the map with caves and tunnels surrounding it, creating tense close-quarters firefights. Exposure boasts a satisfying balance between interior battles and long-range firefights, making it the perfect place to test out the new Season 1 gear and vehicles.

The RAH-68 Huron and the YG-99 Hannibal are the two new helicopters added to the game this season, equipped with gunner seats and capable of carrying squads of players to the objective. In a map like Exposure, they can be used to parachute into capture sites or shoot at holed up enemies through windows due to the map’s verticality differences. Of course, pilots will have to watch out for the usual anti-air gear and now Lis’s rocket launcher gadget, which can be quite hard to dodge if you aren’t skilled enough.

The two new weapons, the Ghostmaker R10 Crossbow and BSV-M Marksman Rifle, are also perfect for the long sightlines on Exposure. The Crossbow is surprisingly lethal and makes great use of the game’s attachment swapping system, letting you change to a more rapid-firing set of bolts or explosive-tipped bolts on the fly. The BSV-M Marksman Rifle is less exciting since the game already has weapons like it, but it’s suited for stealth due to its integrated suppressor which sets it apart from other weapons in the same class. Finally, the new Smoke Grenade Launcher gadget can be used to provide cover to advancing troops and protect your allies from enemies using these new long-ranged weapons to pick your team off one by one. 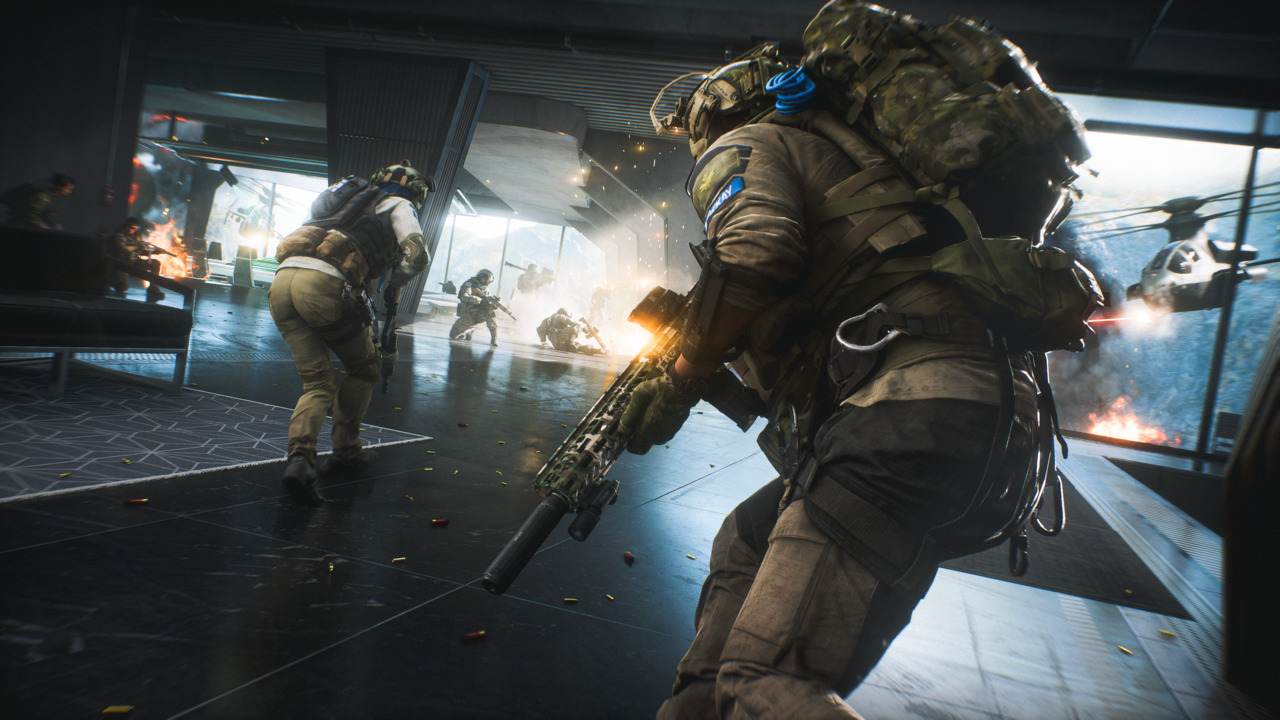 Additional minor updates will also come throughout the season, but these are things that really should have been ready for launch given how long it’s been. The Kaleidoscope map is slated to get a rework in August, Specialists will get more appropriate voice lines sometime in the future, and new third-person animations are coming in June and July among other things.

Is Season 1 Worth Playing?

None of these new additions are bad, but none of them are particularly exciting. After all this time, we’ve only gotten one new Specialist and one new map with a handful of new weapons. The new Crossbow and Marksman Rifle also only suit really specific styles of play, so the average run-and-gun player that favors assault rifles and SMGs really isn’t going to get anything out of them. The same goes for the vehicles, which aren’t going to do anything for most people. Ewelina Lis is a fun character to play, but she easily blends into an already bland roster of characters. 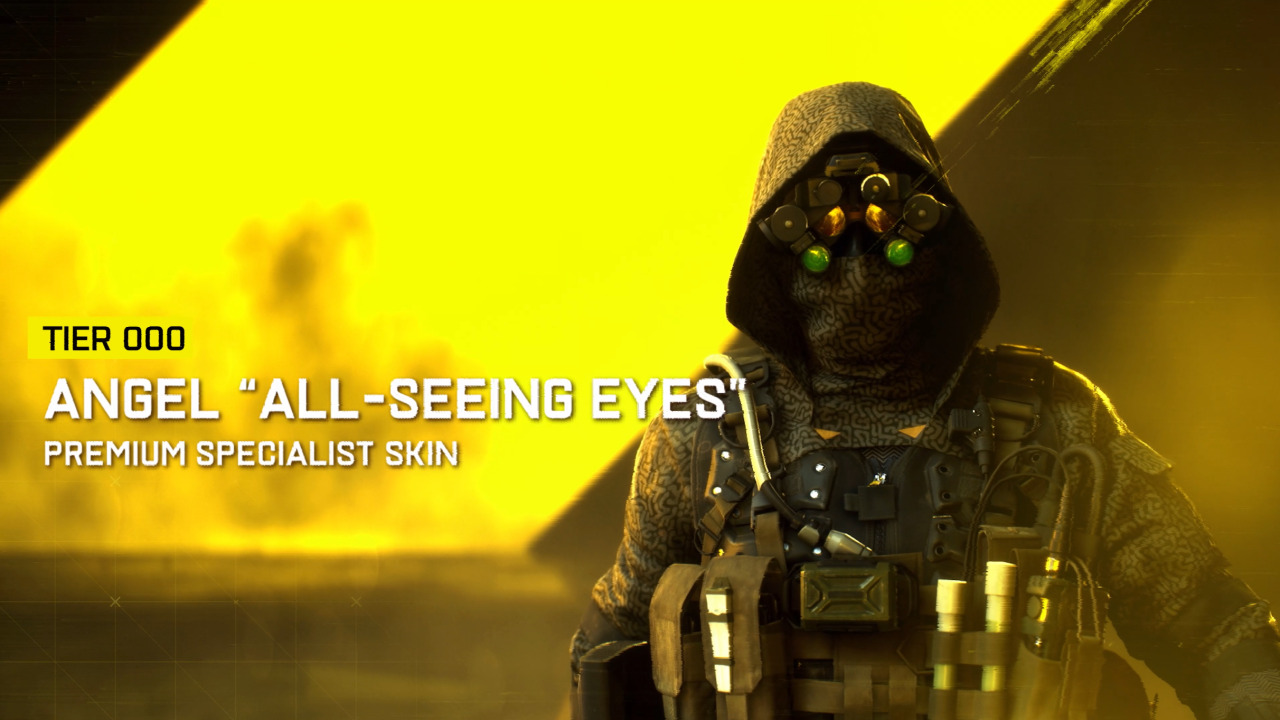 All of these wouldn’t be so bad if the Battle Pass actually had a ton of cool stuff to look forward to, but it’s going to be hard for most people to find the motivation to grind when there’s really nothing special in any of the tiers, free or premium, and any cool rewards you may get could end up being for a Specialist that you don’t play.

It doesn’t help that the coolest reward of them all is Angel’s “All-Seeing Eyes” skin that gives him night vision goggles and a black hooded outfit. It’s available at tier 1 as soon as you buy the Battle Pass. The tier 100 skin, which most players will spend all season grinding for, is the “Skybreaker” skin for Lis, which just puts her in a tank top. 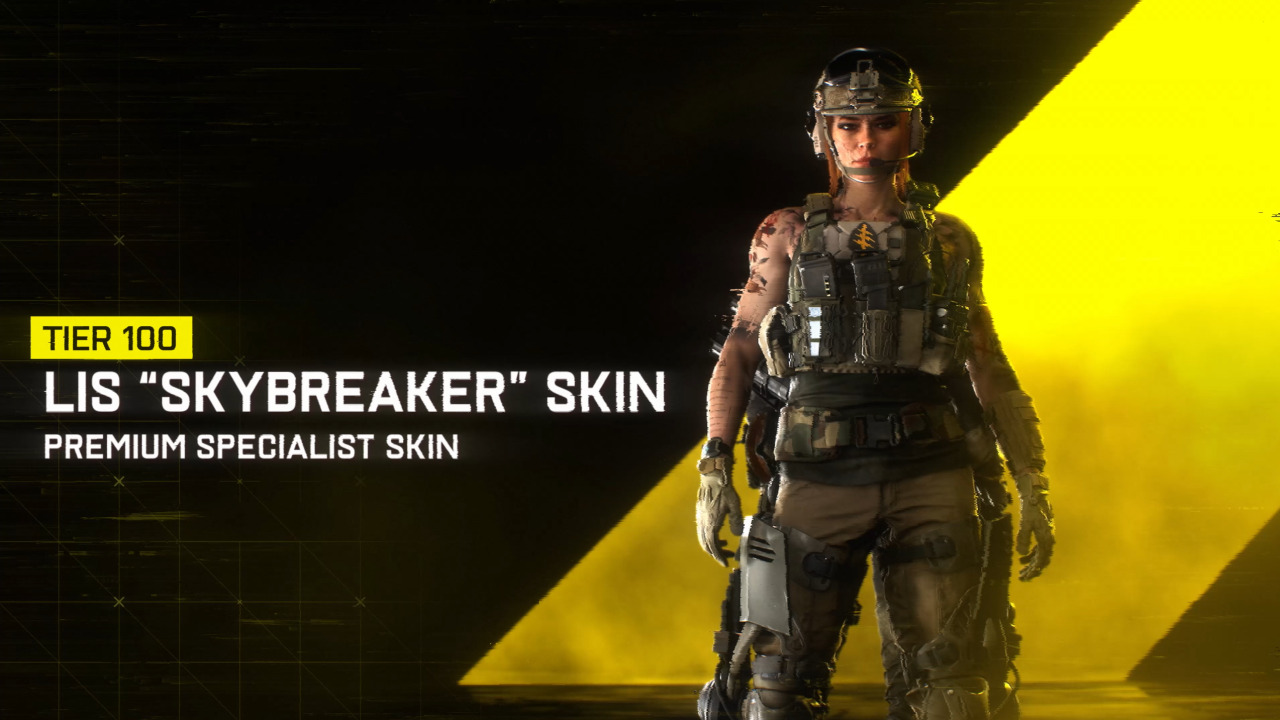 All in all, though, it’s hard to find a lot to complain about with Battlefield 2042 Season 1 because there isn’t much to talk about at all. Several months down the line for one of the biggest FPS games in recent memory, and all we’ve gotten is a new character, a new map, and two new weapons. Yes, there are other things on the list too, but it’s hard to care about a Smoke Grenade Launcher when the game is in this state.

Season 1 of Battlefield 2042 needed to really blow people out of the water. It needed to make the biggest possible splash to bring players back and turn the conversation around. Instead, it’s sadly still struggling to stay afloat.

If you do want to check it out, then Season 1 of Battlefield 2042 will launch on Thursday, June 9 across all platforms. It’s a free update, so you can play on the new map and try out all the new weapons and gadgets without paying a dime. The only thing you’ll have to pay for if you want it is the premium rewards of the new Battle Pass, which includes skins, player cards, Battlefield Coins, takedowns, and more cosmetic rewards.