A Katana to Match His Voice Lines. 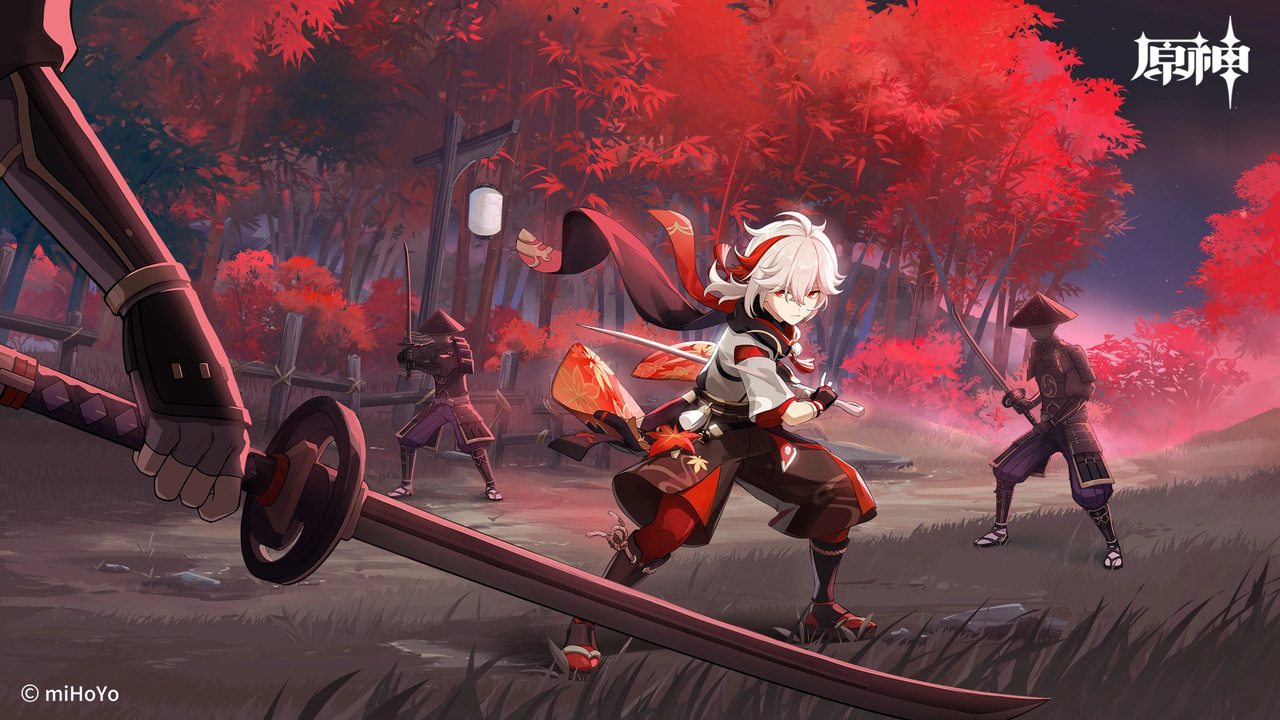 Though Kazuha came with a coinciding sword during his initial release in Genshin Impact, the Devs look to be finally ready to deliver him a katana that matched both his design and color scheme. The Anemo Sword-wielder arrived during the earlier days of Genshin Impact. A seeming filler character that served more the purpose of filling in the gaps between Liyue and the impending arrival of Inazuma at the time. Patch 1.6 delivered both his character banner and the weapon banner Freedom Sworn, an elemental mastery sword that fitted his gameplay, but not necessarily his aesthetics.

This is presumably why Kazuha has been portrayed wielding wind sword apparitions in Genshin Impact promotional materials or the three-star Fillet Blade. Due to not having a katana that could be reliably drawn upon during his in-game appearances. Including his most recent involvement with the events of Patch 2.6, where the event story revolved around uncovering the blade forging history of his familial background, and what went wrong to make him the wandering ronin that he is now.

The 2.8 leaks would reinforce this perspective of Kazuha’s story being developed further by Mihoyo, with the katana carrying lore implications and continuing from the details received during patch 2.6. With Mihoyo recommencing Beta Tests following the recent announcements regarding patches 2.7 and 2.8 came a batch of leaked character information and event details. And one of them was a 4-star sword that looks to be the signature sword of Kazuha that has been referenced numerous times. In his voice lines, character backgrounds, and the recent events.

A new 4* sword is among the final rewards of Kazuha Chapter I legendary quests. This sword cannot be refined.

It is rumored that the sword will gain its name at the end.https://t.co/cCEF8wErCU

According to the Twitter post, the sword is among the rewards obtainable for completing the Kazuha Story chapter set to release during patch 2.8 and cannot be refined upon its obtainment. It was also stated that the sword will have a name until the completion of the story chapter, further reinforcing its close ties with Kazuha. The fact that the Sword can’t be refined makes it difficult to be optimistic about the weapon turning out useful in a practical sense. But players could refer to existing data to come to their conclusions regarding such matters.

There are other aspects to consider as to the release of this katana, however, and that is the high likelihood of a rerun banner coming for Kazuha. Kazuha’s yet to see a re-release ever since patch 1.6, and he’s proven himself to be a premium Anemo support following said release, factoring into many Spiral Abyss and Open-World teams. This katana will perhaps not only serve as symbolic closure to the pages of Kazuha’s personal history but for players wanting to obtain him. Who’s waited for a rerun banner ever since patch 1.6.