Dying Light 2: Hand Over Damien to Carl or Cooperate With Damien?

Should you help Damien find his brother? 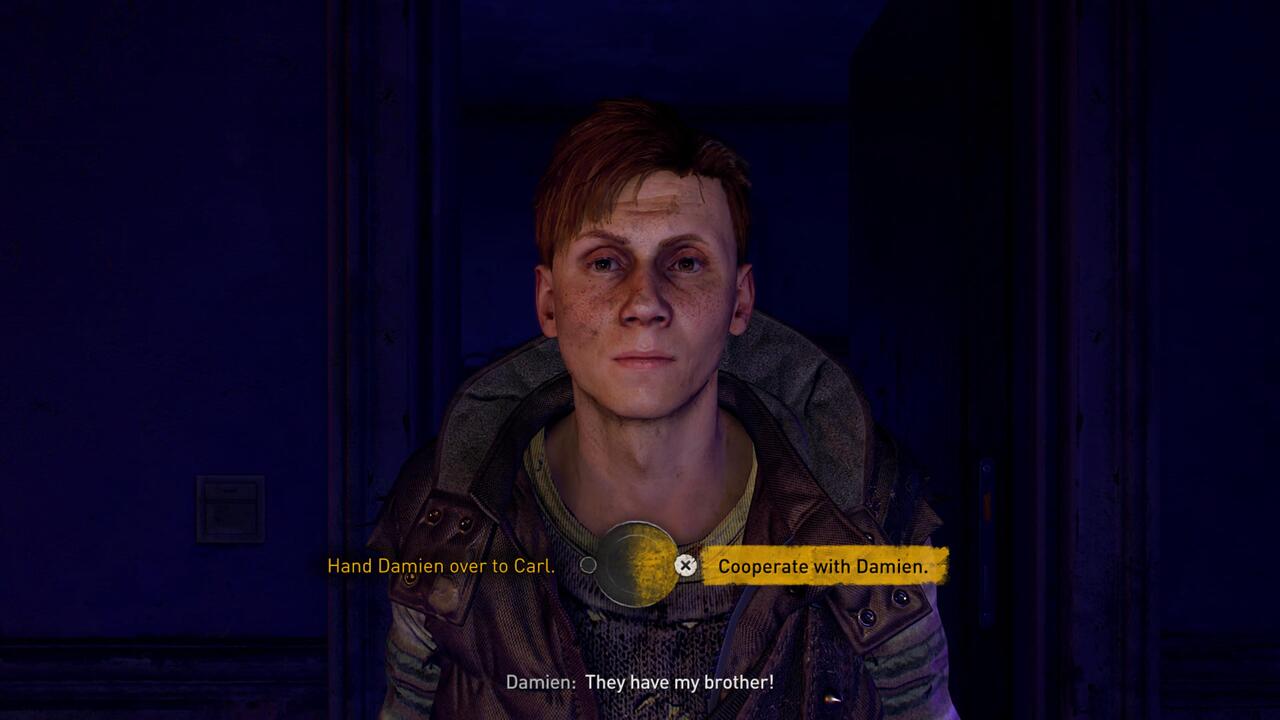 In the Missing Persons quest in Dying Light 2, you’ll be faced with the choice to either hand over Damien to Carl or cooperate with Damien and help him out of the sticky situation he’s found himself in. Damien offers you a job when you walk by him in the Bazaar, only providing a sketchy location for you to meet your employer. When you arrive, you’re ambushed by armed men who want to kill you. It turns out, Damien has been luring people like you to their deaths unknowingly, and now it’s up to you to decide his fate. Here’s what you should do with Damien in Dying Light 2.

Should You Hand Over Damien to Carl in Dying Light 2?

If you choose to hand Damien over to Carl in Dying Light 2, you’ll end up having to fight him. Since he’ll most likely be hanged for his crimes if he goes back to the Bazaar, Damien isn’t returning without a fight. He’ll immediately attack you after the conversation ends, and you’ll be forced to kill him. With Damien out of the picture, the quest will be over.

There is more to see if you choose to help Damien, so this isn’t the best option unless you really feel like it’s the right thing to do. After all, Dying Light 2 is about shaping the city around your personal choices, so if you feel like it’s best to turn Damien in, then go for it.

Should You Cooperate With Damien?

If you choose to cooperate with Damien, then you’ll help him find his supposedly kidnapped brother and get to play through the remainder of the quest. There are some pretty surprising reveals in the next few steps of the mission, and there are some things you might want to be prepared for ahead of time. If you want to see what happens (spoiler warning), keep reading below.

When you do find Damien’s missing brother, he’s not actually kidnapped at all. He’s been in on it the whole time, just tricking Damien into doing his dirty work. You’ll be forced to fight Damien’s brother, and Damien won’t be too happy about that. He’ll find himself at the top of the church tower at the Bazaar, and it’s up to you to save him from there.

Attack of the Fanboy / GAME GUIDES / Dying Light 2: Hand Over Damien to Carl or Cooperate With Damien?