The Rift Tour kicks off soon in Fortnite. 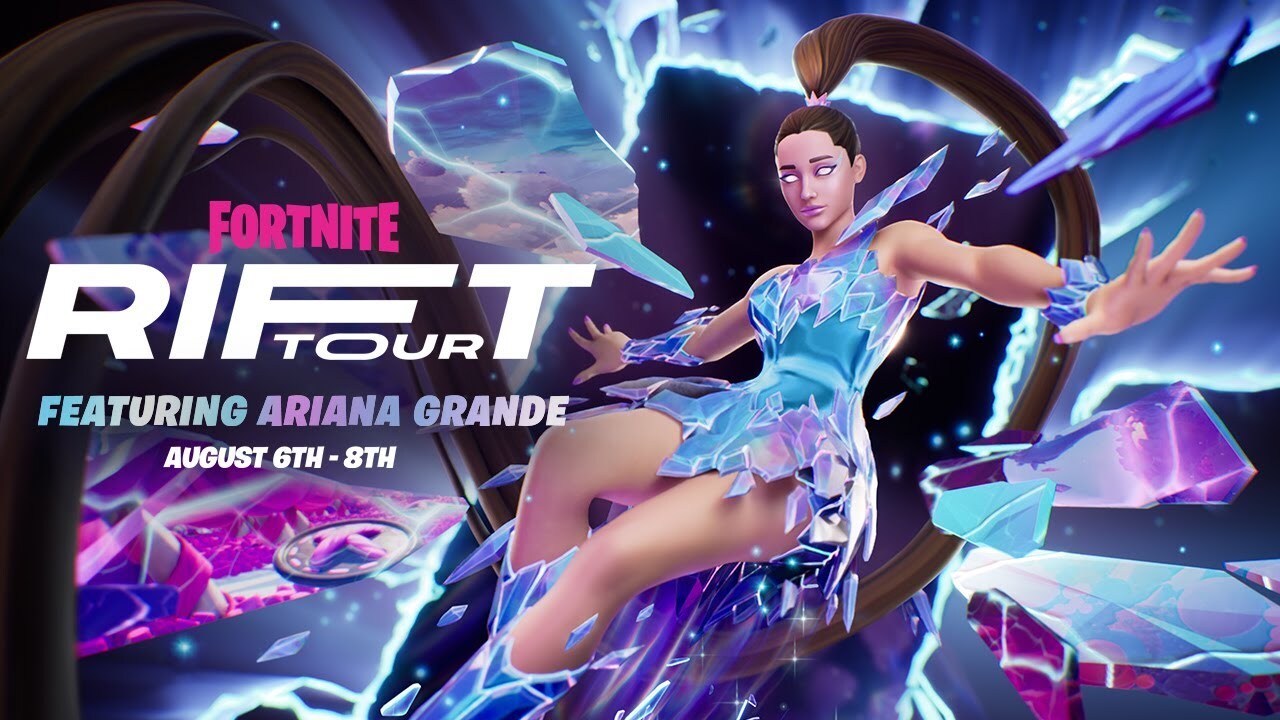 The Rift Tour event is nearly here in Fortnite, and you can catch a live Ariana Grande concert in the game if you log in at the right time. If you haven’t noticed by now, there’s a giant countdown timer in the Fortnite lobby, and that timer is counting down to this. There will be free rewards, new challenges, and much more during the Rift Tour, so you don’t want to miss out. Here’s everything you need to know about the Fortnite Rift Tour event, including the showtimes for the Ariana Grande concert and how to get all the rewards.

When is the Ariana Grande Concert in Fortnite? 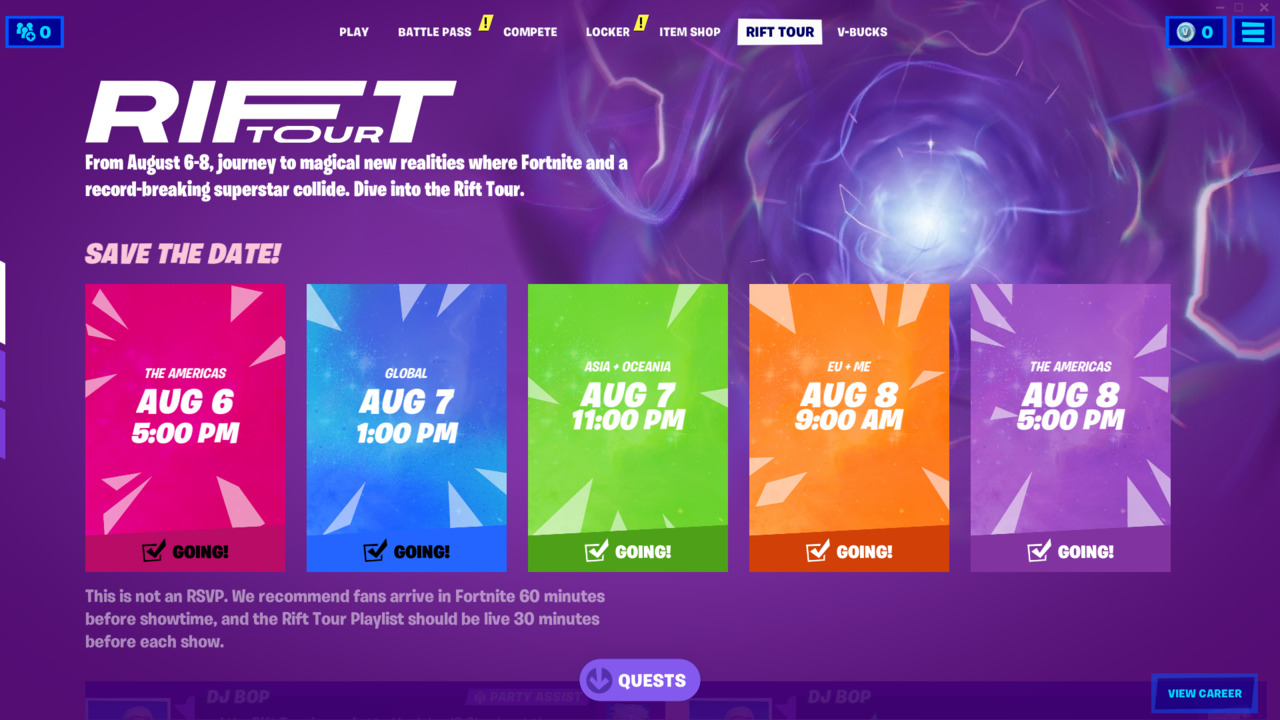 These are the only five showtimes, so make sure you log in for at least one of them so you don’t miss out on the experience. You can RSVP for one of the showtimes in the Rift Tour tab of the lobby menu, but it’s not required. You can log in and join at any of the times even if you don’t check the box that says “Wanna Go?”

What is the Fortnite Rift Tour?

According to Epic Games, the Rift Tour is a “musical journey into magical new realities where Fortnite and Ariana Grande collide.” It’s basically just a concert. Think of the Travis Scott concert from last year, only bigger (if Epic’s marketing is to be believed).

Epic has also been very cryptic about what exactly the Rift Tour will entail, but it looks like it could be more than just a simple concert. Sneak previews have shown rifts, planes, monsters, and the Storm King from Save the World. The name “Rift Tour” also implies some teleporting or alternate reality shenanigans as well, so it seems like the event will be packed with a lot of stuff.

How to Get the Ariana Grande Skin in Fortnite 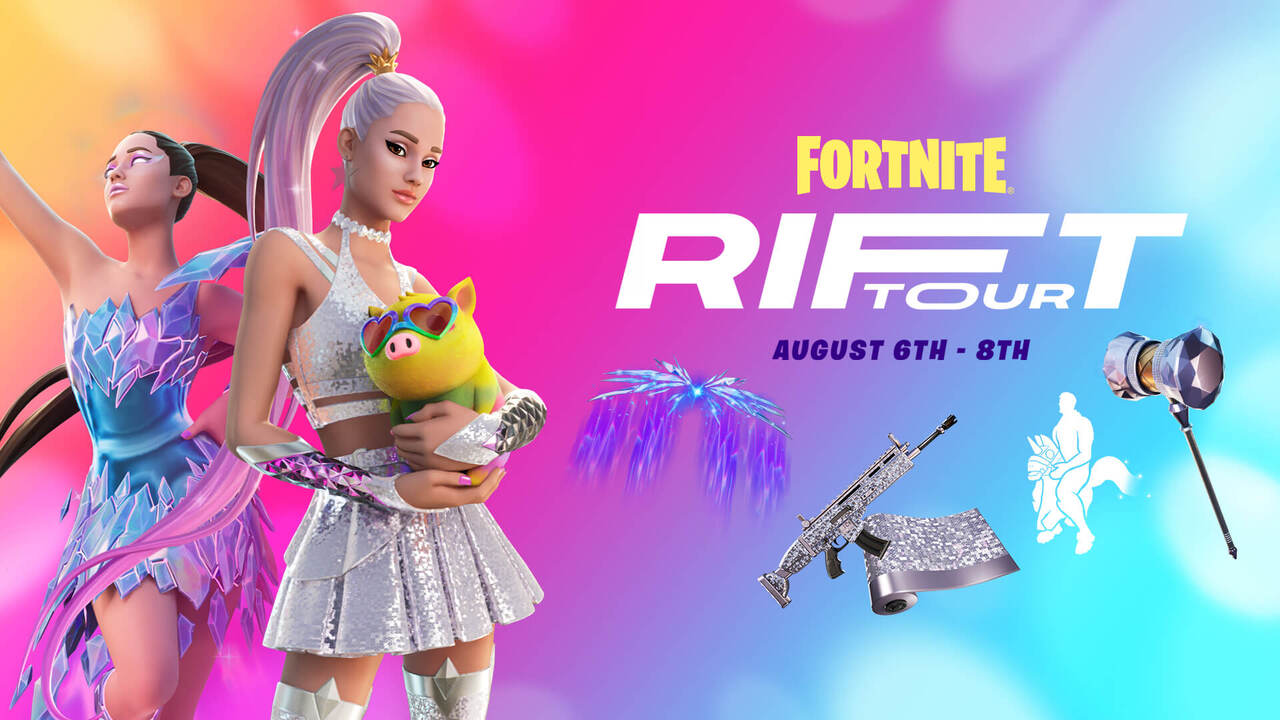 The Ariana Grande skin is a paid Icon Series skin that you can obtain from the Item Shop. It costs 2,000 V-Bucks. The skin includes two styles and the Piggy Smallz Back Bling. There’s also a bundle available for 2,800 V-Bucks that includes the Sweetener Sailshard Wings Glider, 7 Rings Smasher Pickaxe, and the Lil’ Floaticorn Emote.

Other than Ariana, there are also other paid Rift Tour skins available for purchase in the Item Shop. Party Trooper has returned, and you can unlock an exclusive new style by attending the concert if you own the skin. There’s also a new set of skins called Press Play, which feature music-reactive clothing.

There are several free Rift Tour rewards that you can earn simply by completing challenges. Here’s the list of challenges and rewards: 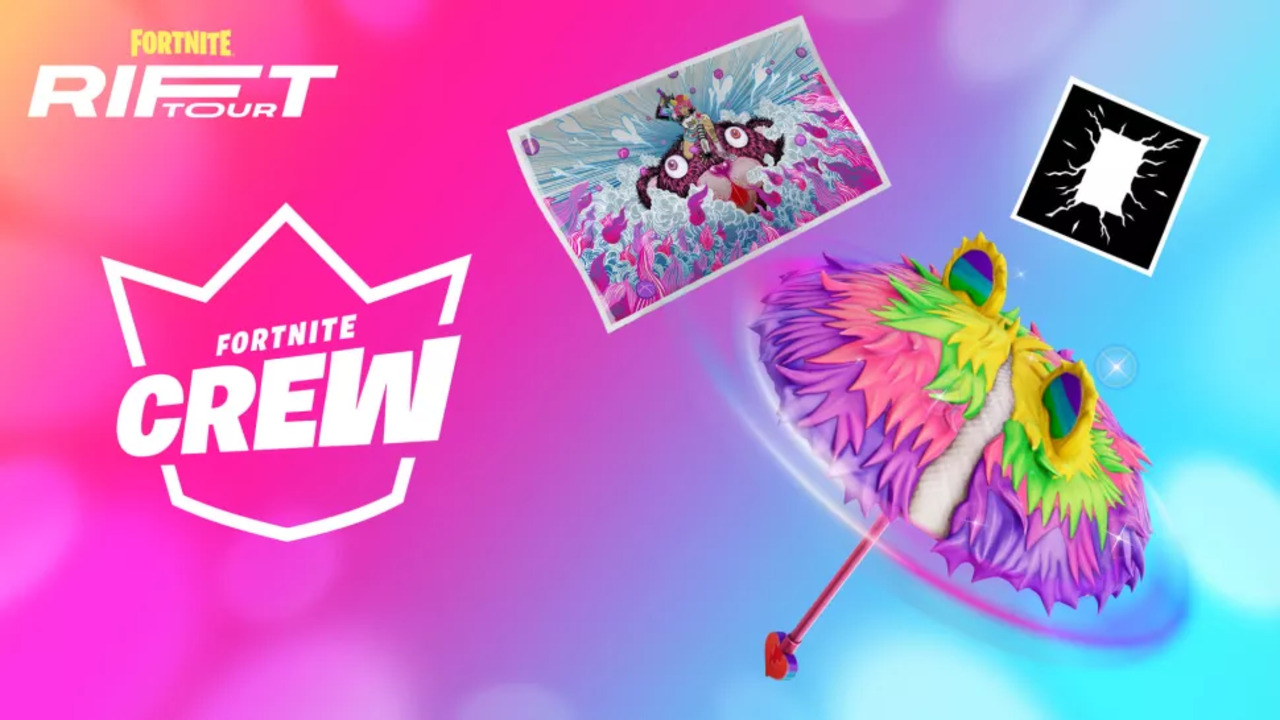 All of these rewards are free, but you have to complete them before the Rift Tour event ends on August 8. Fortnite Crew members will receive additional rewards as well just by logging in between Wednesday, August 5 at 10 AM ET to Monday, August 9 at 10 AM ET. If you have an active membership, you’ll receive the Rainbow Cloudcruiser Umbrella, the Skye Up High Loading Screen, and a Rift Tour Banner for free just by logging in.