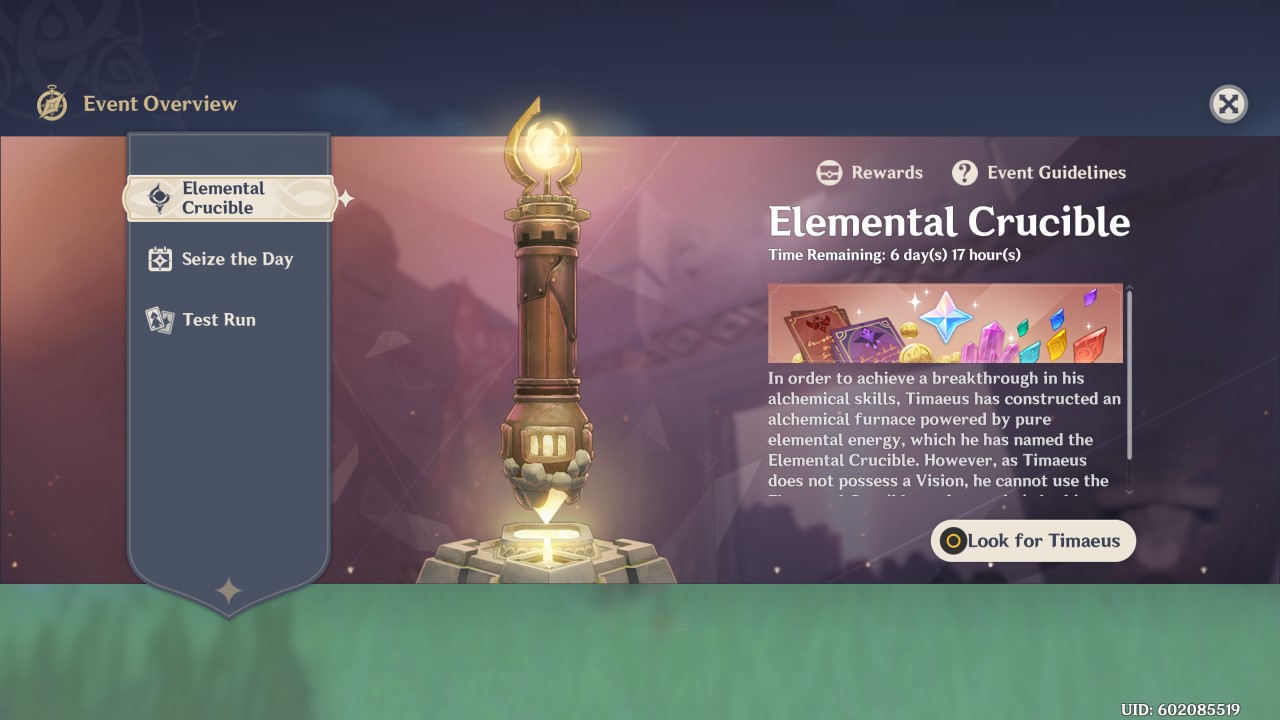 The Elemental Crucible is the first event to drop for Genshin Impact, and it’s live as I write this. The event itself isn’t too cosmic, and you’ll need to put in a little bit of work to unlock it, but those of you with either time or Resin to burn can get some decent rewards from it.

Once you’ve unlocked the event from Timaeus in Mondstadt (your journal will point you in his direction once you’ve cleared the two major prerequisites), you can head to the Thousand Winds Temple in eastern Mondstadt to start the event. The Starfell Valley waypoint and Temple of the Wolf are the nearest fast travel points, and the event has an icon on the map you can navigate towards. Once there talk to Timaeus, who will unlock the full event proper after a short bit of dialogue.

The concept behind the Elemental Crucible in Genshin Impact is simple: you’ll be matchmade with a group of three other players, and from there be tasked with clearing a constant wave of enemies for elemental cubes. These cubes reflect the element of the enemy slain, and grabbing conflicting elements will trigger an elemental reaction, much like combat. The key is to hoover up similar or non-conflicting elements and bank them into the Elemental Crucible in the center of the arena.

Again, this event is not cosmic by any stretch. A fair bit of warning: when you complete the event you won’t be kicked out of the group you are in, so you or someone else can trigger the Crucible for another round. Check with your party first, or bail and matchmake into a new one. Additionally, the rewards for Elemental Crucible not only scale with your World Level, but cost 40 Resin to redeem. Yeah . . . it’s another Resin sink. At World Rank 4 it’s a better source of exp books than Ley Lines per Resin spent, so you may want to grind to Adventure Rank 35 if you want to maximize your rewards for your Resin.

There’s also an Elemental Crucible “handbook” with challenges to complete for free rewards not tied to Resin. You can play the event and make progress on these without spending any Resin, so you can grind out the Elemental Crucible in Genshin Impact if you so choose. The rewards are not exactly grand (exp books, Mora, enhancement cores, some mid-tier ascension materials, and 300 Primogems), but they’re there. You can pull up the handbook to track and claim rewards from the Event menu (F5 on PC).