Genshin Impact – What is Resin, How to Increase Daily “Stamina”

It's not the most severe of walls to overcome, but it's important to know how Resin affects your progress. 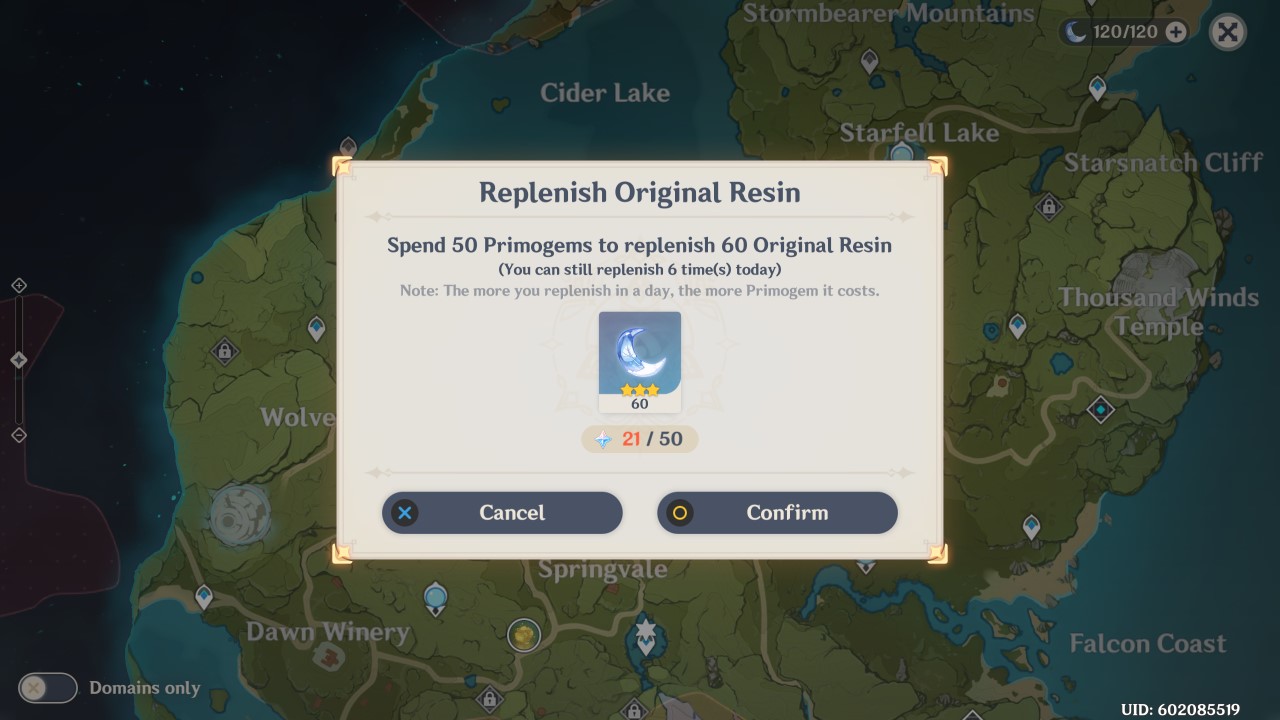 Genshin Impact is a gacha-style game, and that means it has a daily “stamina” system – Resin – that limits what you can do a day. Thankfully, the game’s open world design makes this limitation less of a pinch point than other gachas during the early game, but it’s important to know what it limits, because come Adventure Rank 30 Resin will start to hard-limit what you can do in-game.

Genshin Impact daily “stamina” (Resin) is used for a handful of activities, and is accumulated over time.

In Genshin Impact there are a few activities (and these activities will become more important the deeper into the game you get) limited by the amount of daily “stamina” you have, known as Original Resin in the game. The cap is fixed at 120, and it can be replenished a couple of ways. First, let’s start with what actually consumes Resin.

It should be noted that you can participate in these four activities without Resin, but you’ll need it to claim the rewards. In other words, you can still join up with friends and help them with their tasks should you run out for the day; you’ll simply miss out on the loot at the end. Resin isn’t too hard to restock initially, however, though it can cost some coin if you are eager to maximize your gains. That said, don’t go spending your Primogems or burning through Fragile Resin to top up Resin early on: you will want to save those for later, roughly around Adventure Rank 30 when Resin activities become the only way to truly progress.

First and foremost, your daily “stamina”/Resin is replenished over time, akin to other gachas. The rate is 1 Resin every 8 minutes, so it’s not the most rapid of rates. You will never exceed the 120 cap, so there’s no banking Resin as a catch-up mechanic. You can also top up your Resin with one of two items. Fragile Resin will grant you 60 Original Resin when used, but there’s no way to consistently earn these outside Adventure Rank level-ups. Additionally, you can use Primogems to grab 60 Resin six times a day, but the price increases each time. The prices are 50, 100, 100, 150, 200, and 200. Primogems are earned liberally during the early game, yet begin to dry up as you clear the map. These are technically the premium currency used to purchase Fates for Wish pulls as well, so if you’re hunting a 5-star character you’ll want to balance your grind with your pulls.

Home / Game Guides / Genshin Impact – What is Resin, How to Increase Daily “Stamina”