Genshin Impact – How to Get Intertwined Fate and Acquaint Fate

There are plenty of currencies to keep track of, but they all lead back to Fates. Genshin Impact may be a fun open-world RPG, but it’s also a gacha game, meaning you’ll need Intertwined and Acquaint Fate for some good ole pulls. These two items are the only currency currently used to make “Wishes” (pulls), though they’re not difficult to acquire. Grindy, maybe, but you don’t necessarily have to open your wallet to make the occasional pull for a potential high-rank character or item.

Genshin Impact Intertwined Fate and Acquaint Fate are purchased with either Primogems, Starglitter, or Stardust.

Okay, so what exactly are Primogems, Starglitter, and Stardust in Genshin Impact, and how do you redeem them for Intertwined and Acquaint Fate? Primogems are one of the “premium” currencies in Genshin Impact, though they are earned liberally in-game. They count as a premium currency because the currency you do buy with cash, Genesis Crystals, are directly converted in Primogems whenever you want to make a pull. I.E. If you buy currency for pulls it will ultimately end up as Primogems. Again, these are easily earned in-game.

Starglitter and Stardust are a little easier to wrap your head around: these two currencies are earned from pulls. You’ll get a set amount of Starglitter and Stardust from pulls depending on the rank of the item pulled, as well as from duplicate items. You’ll need to check the “Details” tab of each Wish to see what the explicit rates are per Wish for each, but you won’t be buying these directly with cash. 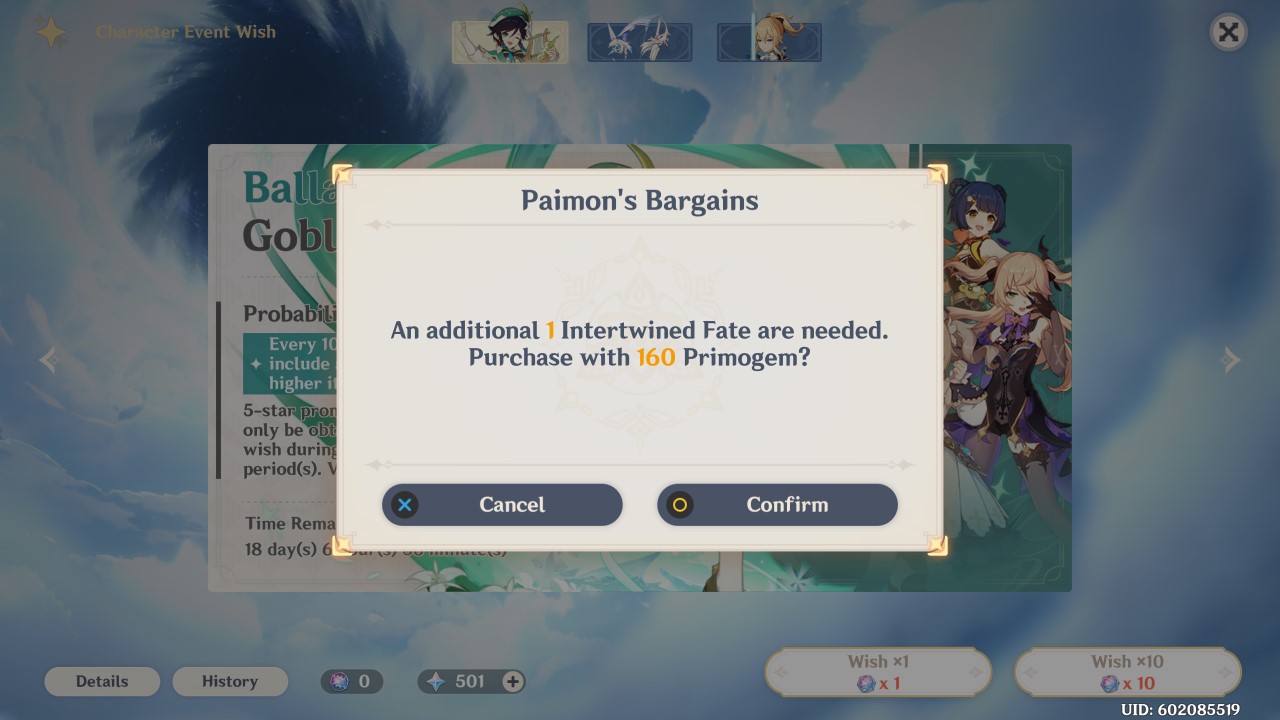 Once you have any of these you can go to the Shop, and from there the Paimon’s Bargains tab. You are limited to five Intertwined Fate and five Acquaint Fate per month via Stardust in Genshin Impact, but you can buy as many as you desire with either Primogems or Starglitter. That said, you’ll want to sit on your Starglitter: it’s essentially your “bad luck” currency, and can be exchanged for specific 4-star characters and items that rotate on a timer. Primogems are the defacto Fate currency, so you’ll want to focus on using them.

Additionally, you can immediately grab the Intertwined Fates or Acquaint Fates you need from the Wish menu without having to convert Primogems within the shop. So long as you have 160 Primogems you can click on a single pull, and Genshin Impact will ask if you’d like to convert them into the one Fate you need for the pull. You can keep doing this till you run out, trade 1600 Primogems for 10 pulls: so long as you have the Primogems you can keep pulling without manually converting them into Intertwined or Acquaint Fates.