With the launch of a new Call of Duty game comes a new zombies mode, which means a ton of new Easter Eggs for fans to dig into. These things are well hidden throughout the Zombies in Spaceland map featured in Call of Duty: Infinite Warfare. We’re going to try to put together, and keep up this Call of Duty Infinite Warfare Zombies in Spaceland Easter Egg guide, but please keep in mind that these things are discovered by the community as they play through the game. We’ve dug in as well, but it will take millions of players to figure this stuff out. If you have a piece to one of the many puzzles please let us know in the comments and we’ll update this article.

With that in mind, let’s dive into the Call of Duty Infinite Warfare Zombies Easter Eggs guide. For this I’ll be pulling from any info source I see, so it’s gonna be choppy for a while. And if you just want to check out the main Easter Egg, that is near the bottom.

Pack a Punch: This one, at least has been figured out. To get to the Pack a Punch location you can follow this separate guide. The gist is to power up the whole park and go through all four portals, then go back through the main portal.

Elemental Upgrades: This ties into Pack a Punch, as you need to have unlocked that area to do this. To the left of the Pack a Punch is a large urn, go to it and hold Square or X and some small UFOs will fly out. These are going to collect the souls of the zombies that you kill, so get ready to slaughter a lot of them. They are stationed near the four large traps in each area: the dance floor in Astrocade, the rocket ship in Journey into Space, the Chromosphere in Kepler, and the laser beam in Polar Peak. Use the traps to fill the UFOs with souls by getting large trains of zombies following you, then lead them to the trap and activate it.

After this you’ll need an Arcane Core, which can be purchased with 300 tickets from most vendor spots. This will allow the kills from your weapon to fill the UFO as well, which is required at the end of the cycle. Go to the traps and just shoot zombies to finish this step. Once done, the UFO will drop an elemental core. Just pick it up to attach it to your weapon. Each location has a different element, so try them all out.

N3IL: N3IL, the headless robot you encounter in the main area of the park, is a goldmine of Easter Eggs. Grab his head off the snack cart just past his body, then put it on him. This will initiate a series of challenges. Complete them to earn tickets, and eventually power him up so that he can rocket off (just head back to his location to trigger this after completing the requisite challenges). He’ll bring back a very special helper for you, but this will drain his batteries. A replacement battery will be available on the map, but there are a few locations, one popular one is in the Polar Peak gift shop, near the back counter. Inserting this into N3IL will initiate another series of challenges, with another great reward at the end. 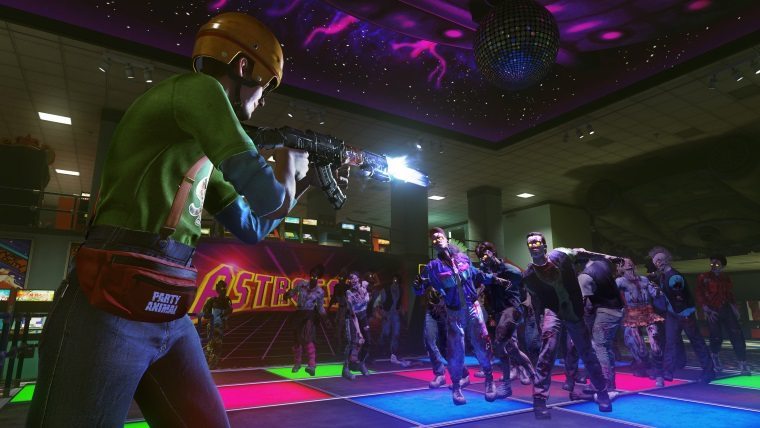 Main Easter Egg: OK, this is a tough one and actually seems to have not been completed by anyone. This is a long series of things to do, and is very tough to complete, even in its mid-steps. You need the boombox, calculator, and umbrella for this, which can all spawn in various different locations. Here’s the ones we’ve seen so far.

Umbrella: On a bench in the first main area, behind the counter in the Polar Peak gift shop, and next to the rocket ship terminal in Journey into Space.

Calculator: On a bench near the main portal, on the upper level of Astrocade on top of a trash can, and on a bench near Kepler’s Chromosphere trap.

Boombox: Near the power switch in Kepler, in the staff room underground on the counter, and on the lower bridge out of the starting area near the popcorn cart.

Once you have all three items, give them to DJ Hoff, as I call him, and then fend off a couple of waves of zombies. He’ll give you the Seti-Com item, but now you need to activate it in specific locations. You need to wander the map until your screen and controller start to shake. Put the item down and defend it for the set amount of time, 60 seconds on the first wave, but higher for the rest. You need to do this three times, and wait for a tone (probably after a clown wave). Look up at the UFO that is crashed into the mountain and memorize the tones and order. Now give it back to DJ Hoff. Fend off two more waves then head back to get the new items.

Near the main portal are golden circles on the ground, place the items there and right in front of the portal, which should be active for Pack a Punch. You’ll then have to play Simon Says with the UFO, with it lighting up the four colors in different orders. Do this three times and the alien boss will spawn. This fight will be tough, with the alien teleporting around the level a lot. He takes a ton of damage, but just keep hitting him.

With the alien boss dead, you now need to take on the UFO itself. It has tracking missiles, so be careful and keep moving. To take it out, you need to look at the Spaceland sign. There are five blue panels on there, which you need to shoot to turn yellow. When they are all yellow at the same time they will shoot electricity at the UFO, taking it out and completing the Easter Egg. You can now grab the Soul Key at the main portal, which will allow you to double Pack a Punch all of your weapons.