Take down Nefarious' suit before the final battle. 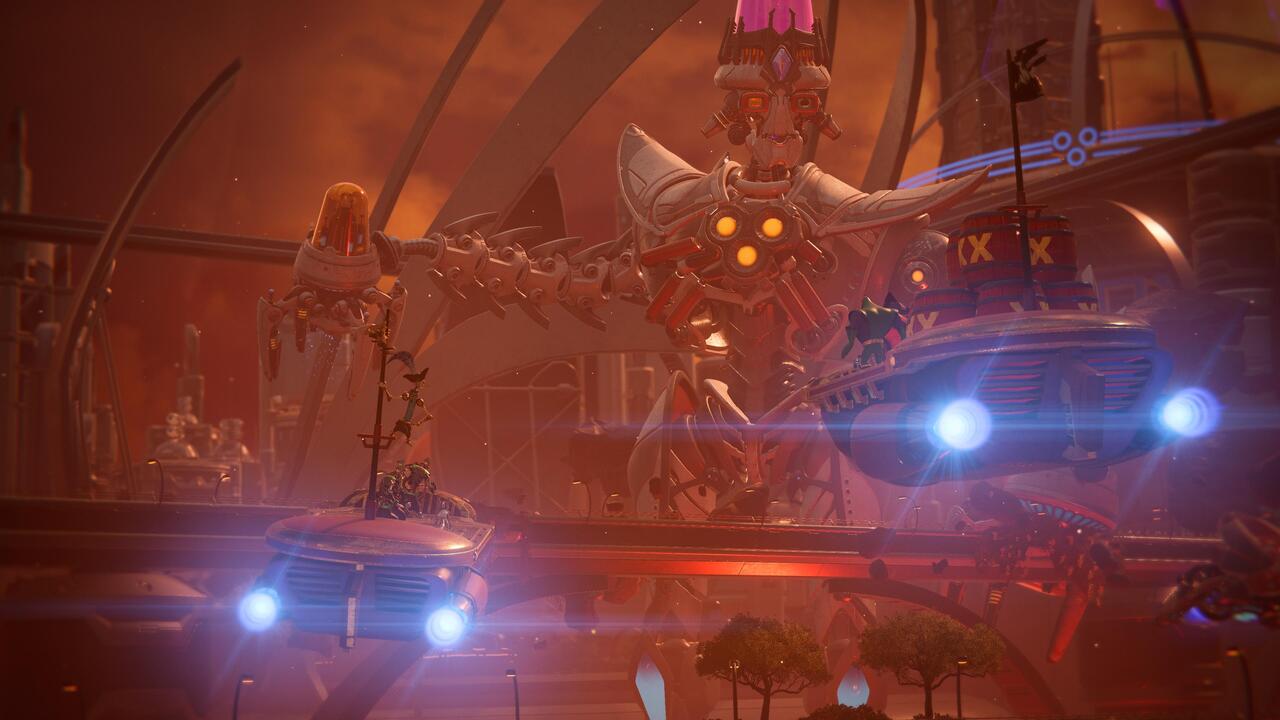 After a long dimension-hopping road trip, it’s time to take the fight back home. The Imperial Power Suit is the penultimate boss of Ratchet and Clank: Rift Apart, and it pits both Rivet and Ratchet against their deadliest foe yet. You’ll switch back and forth between the two heroes throughout the course of the fight, and you’ll need to use everything in your arsenal to come out on top. It’s not that tough of a fight once you get his moveset down, but his huge health bar makes this a battle of endurance. Here’s how to beat the Imperial Power Suit in Ratchet and Clank: Rift Apart.

How to Beat the Imperial Power Suit in Ratchet and Clank: Rift Apart

The fight begins with Rivet on a small walkway. There isn’t much room to dodge attacks, but the Imperial Power Suit only has a few basic attacks during this stage. Your goal here is to shoot the weak spot on the palm of the suit’s hand. It’s a giant orange rectangle, so it’s hard to miss. Nefarious will perform sweeping laser attacks every now and then, but you can just jump to avoid them. Once you get him down to 80% HP, it’s time for phase two. 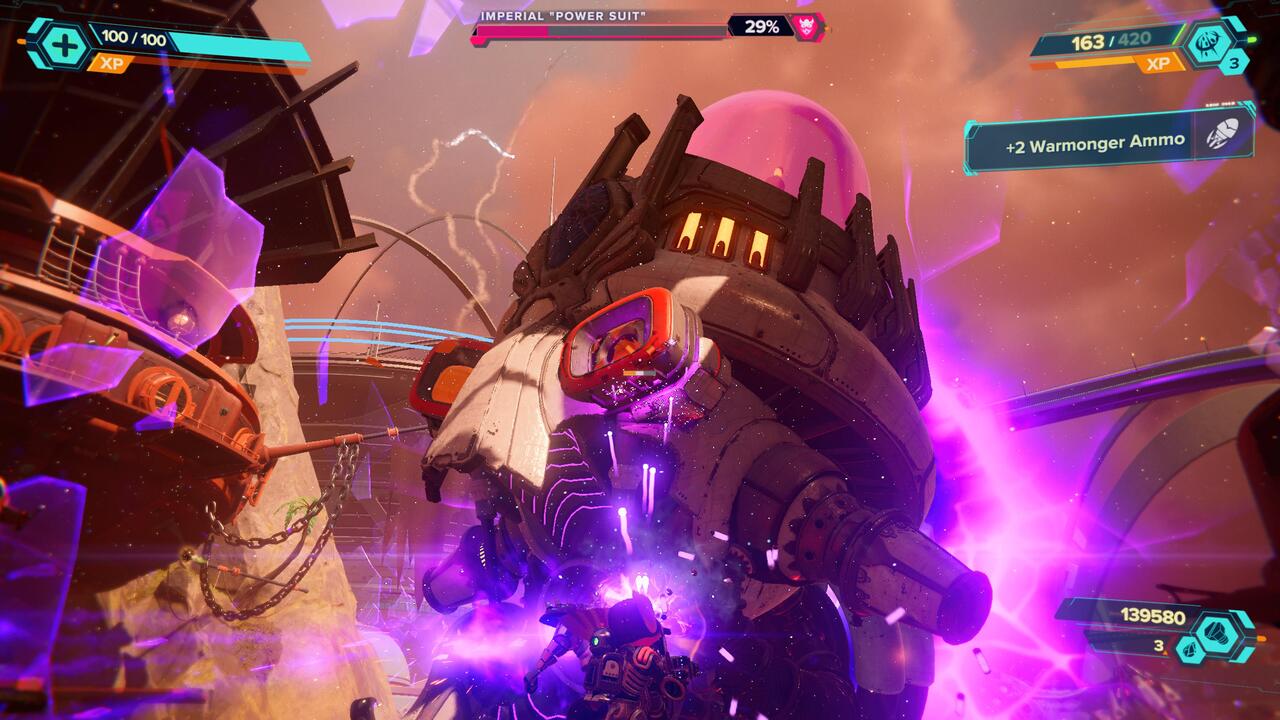 The second phase brings the fight over to Ratchet. Along with the hand, this time you’ll also be fighting the head of the Imperial Power Suit. Again, you need to shoot the orange weak spots. This time, it’s the suit’s eyes. The head will occasionally appear and shoot lasers from its eyes, so be ready to dodge those. It will also shoot lasers from its mouth, but you can avoid these as long as you keep jumping and stay on the move. The hand lasers are still a part in this phase, too. It’s really a simple fight, the suit has a ton of health. If you need healing or ammunition, check the left side of the arena near the rift. Don’t be afraid to throw down a Mr. Fungi or two to take some of the heat off of you, too.

Once you fully deplete the Imperial Power Suit’s health bar, you’ll be teleported to a debris field. This is a quick platforming section, so there’s nothing to worry about. Just push forward toward Nefarious, using whatever rifts you see. Use the Hurlshot when prompted and you’ll be taken inside the suit’s heart. Now, it’s time to take it down for good. 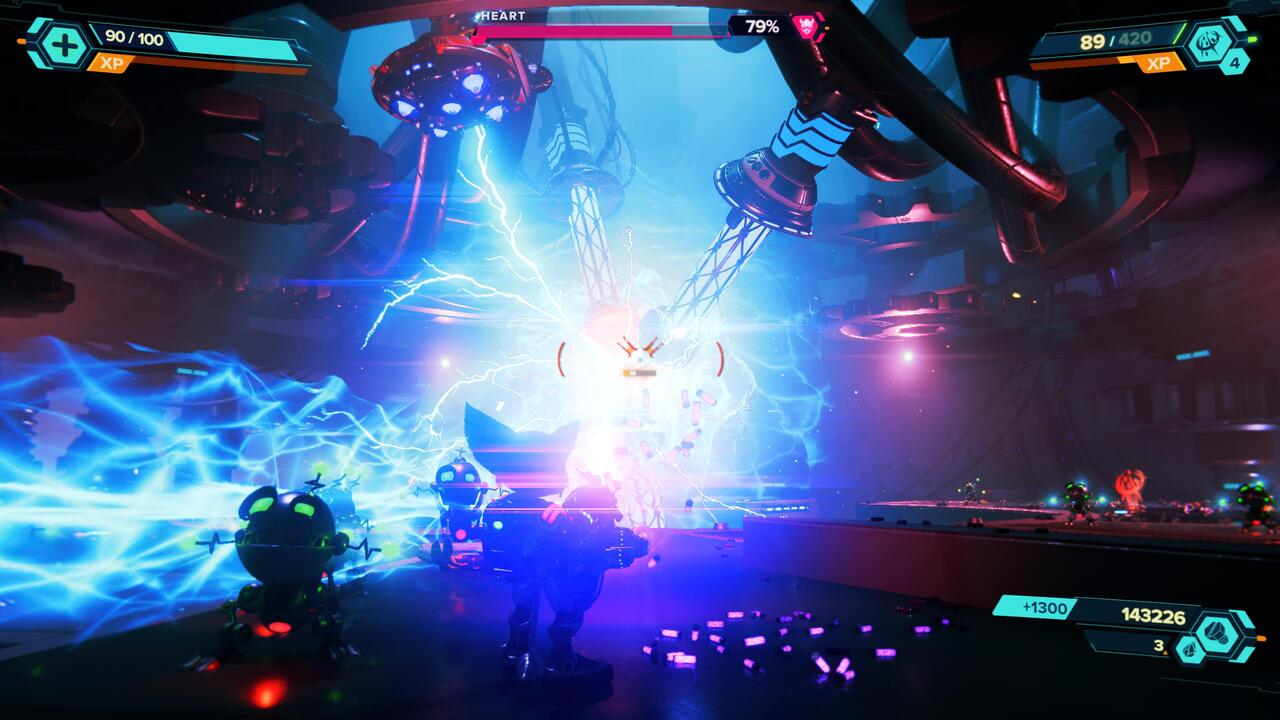 In this phase, you have to destroy all six Heart Nodes. They’re the glowing red weak spots on the heart in the center of the arena. Nefarious will send a ton of troopers into the arena to defend the heart, but you can mostly ignore them. The Heart Nodes are incredibly fragile and go down pretty quickly. If you’re finding the troopers too much to handle, just throw down a Mr. Fungi or use the Glove of Doom to give yourself a few allies. When all of the nodes are destroyed, the heart will be exposed. At this point, just shoot at it and jump over the spinning electric hazards when they come to you. When you finish it off, the fight will be over!

Ratchet and Clank: Rift Apart is available now exclusively for PlayStation 5. Check out our review of the game here.