Ratchet and Clank Rift Apart: All Weapons and How to Get Them Weapons are really important in a Ratchet and Clank game, and Rift Apart has no shortage of cool guns for you to unlock and level up as you hop between planets and dimensions alike. While your arsenal starts out small, you’ll soon have a devastating tool of destruction for every situation. Every weapon can be leveled up through normal usage, and you can also purchase upgrades using Raritanium obtained by exploring planets.

All Weapons in Ratchet and Clank: Rift Apart

Nearly all of these weapons can be purchased with bolts at Ms. Zurkon’s shop, but there is one notable exception: the RYNO 8. Some of these descriptions may contain minor spoilers for planets and locations in Rift Apart. There are 20 weapons in Ratchet and Clank: Rift Apart, and each of them is listed below. This is Ratchet’s trusty sidearm. It is obtained for free in the parade at the start of the game. This pistol fires shots of hot plasma with great accuracy, but it can also sacrifice accuracy for a much faster fire rate. Overall, it’s a very versatile weapon. 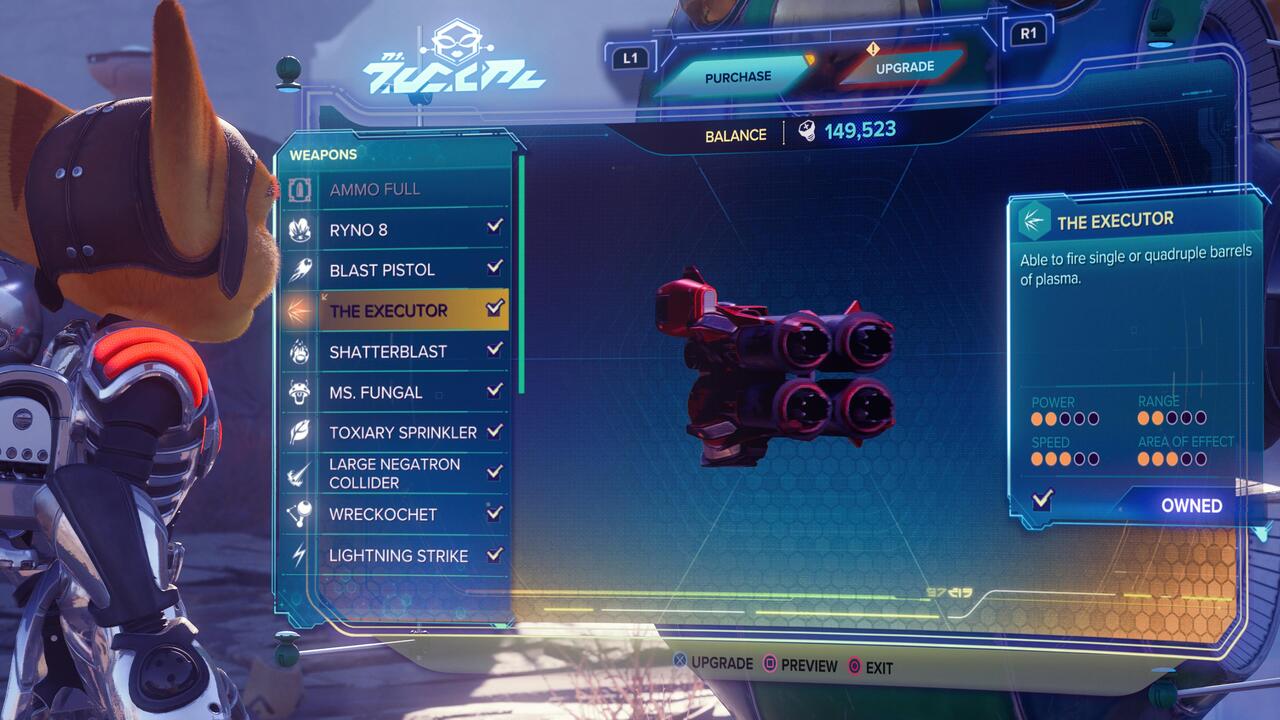 The Enforcer shotgun can be purchased from Ms. Zurkon for 1,250 Bolts the first time you meet her. This weapon uses the adaptive triggers of the DualSense controller to control its barrels. Pulling the trigger halfway will fire a single barrel, and a full pull of the trigger will fire both at the same time. It’s a powerful weapon that remains an important part of your arsenal even later in the game. 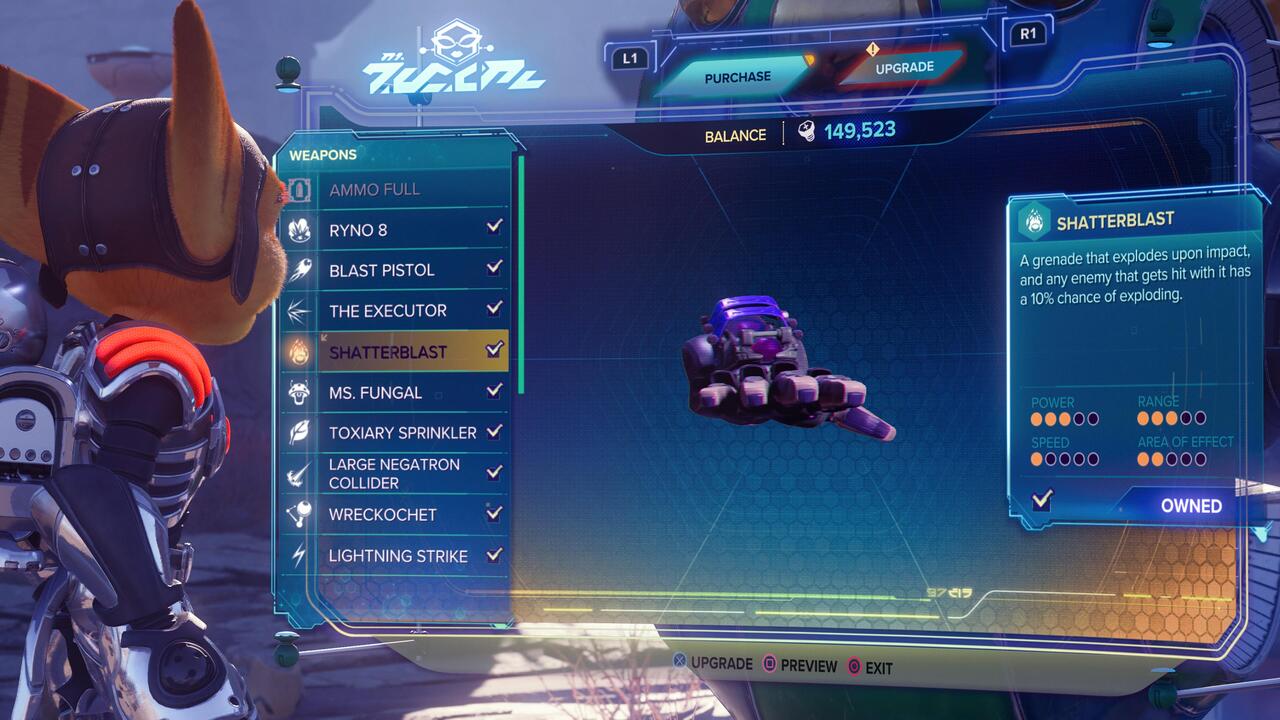 The Shatterbomb can be purchased from Ms. Zurkon for 1,250 Bolts the first time you meet her. This is your primary grenade weapon. You throw it and it explodes, pretty easy to understand. While it starts out slow and weak, its explosions quickly become devastating once you invest some Raritanium into it. 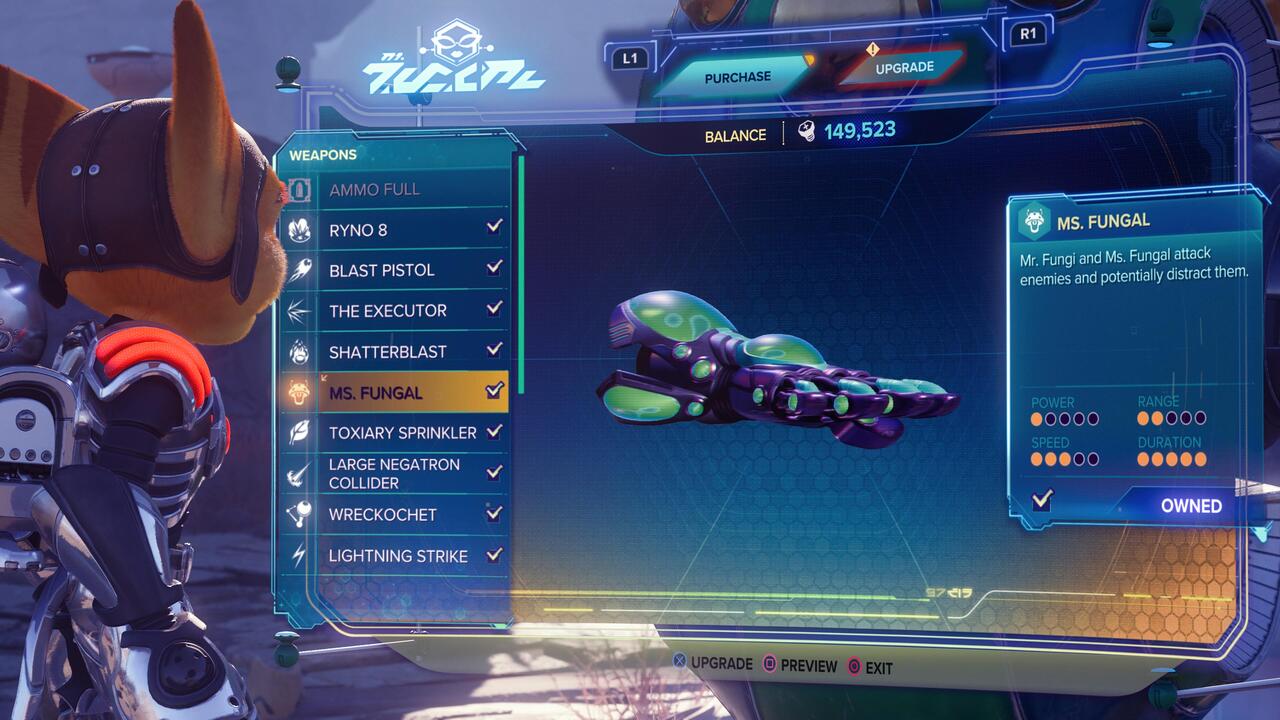 Mr. Fungi can be purchased from Ms. Zurkon for 3,000 Bolts after reaching Corson V. It’s a bit different from most weapons because you can’t use it to attack anything directly. Instead, it spawns a fungal ally that draws enemy fire and attacks enemies on its own. It’s an incredibly helpful tool that makes crowd control and boss fights a breeze. 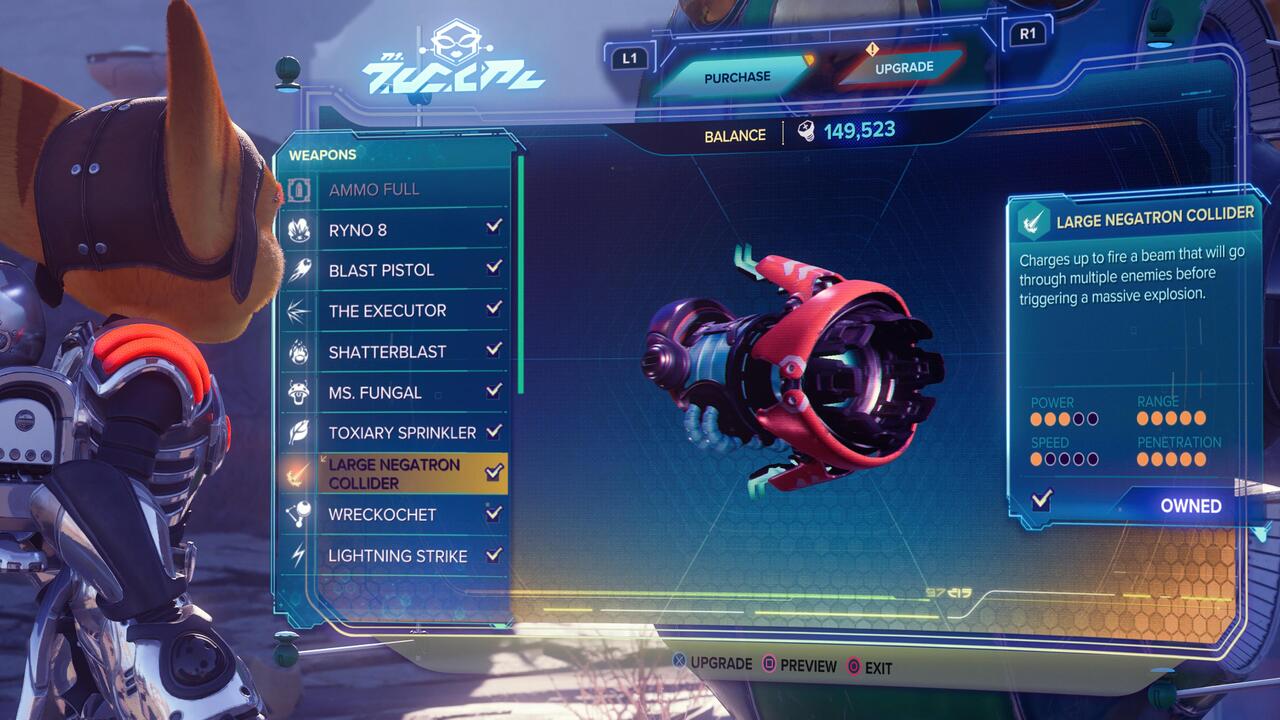 The Negatron Collider can be purchased from Ms. Zurkon for 5,000 Bolts after the weapon upgrade tutorial on Corson V. This weapon’s gimmick is that its beam can pass through multiple enemies. It starts out pretty weak, but some of the Raritanium upgrades for it can transform it into the perfect gun for crowd control. 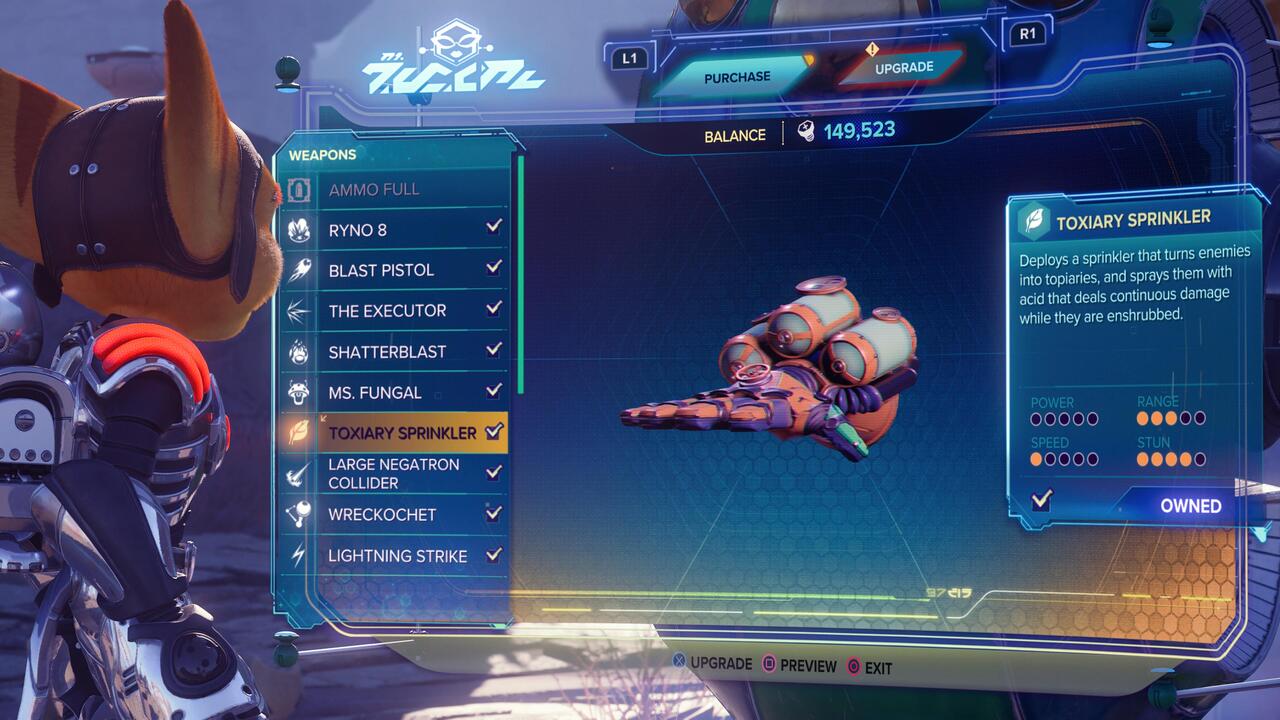 The Topiary Sprinkler can be purchased from Ms. Zurkon for 4,000 Bolts after reaching Sargasso. This is one of the best weapons in Rift Apart, full stop. It immobilizes any enemy within a certain radius by covering them in plants, and you can even upgrade it to make affected enemies take more damage from your other weapons. This thing lets you shred bosses and decimate even the toughest enemies with ease. 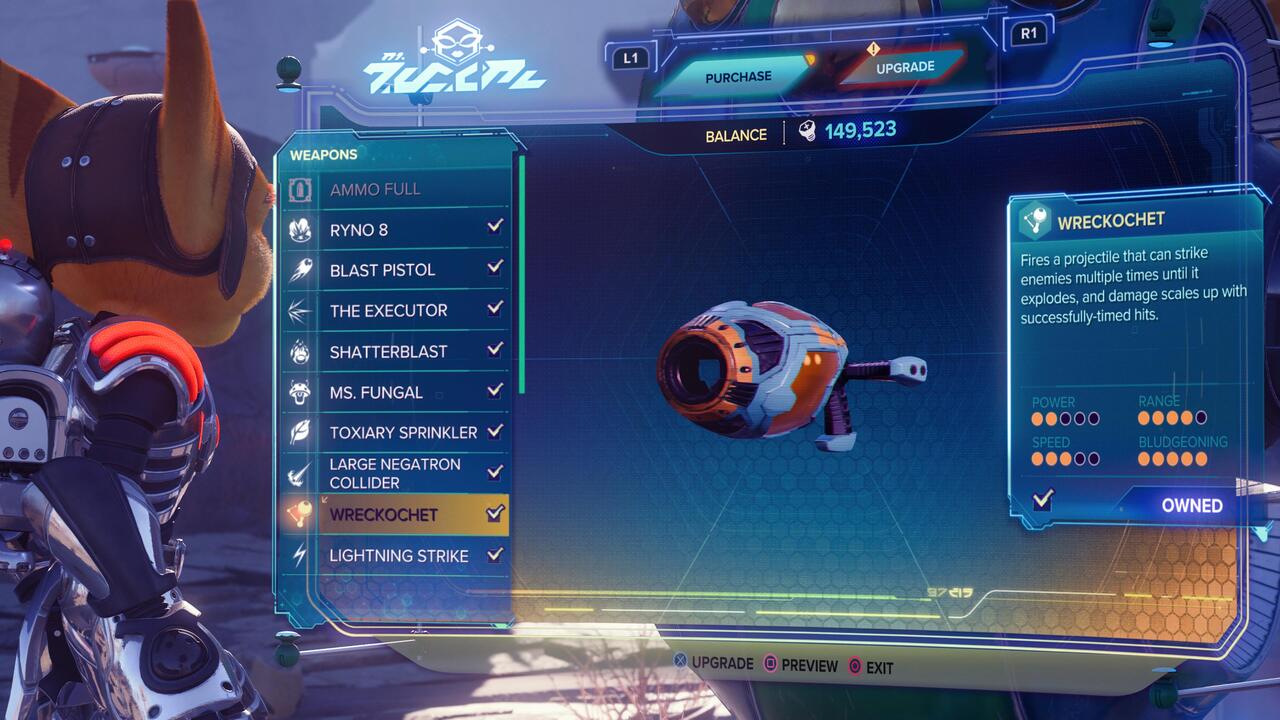 The Ricochet can be purchased for 6,500 Bolts from Ms. Zurkon’s shop. It starts out pretty underwhelming, but it gets way better once you figure out how to use it and you get a few upgrades under its belt. This weapon is designed around timing, so follow the rhythm to do bonus damage to your foes. You can even knock bonus bolts out of them with the right upgrade. 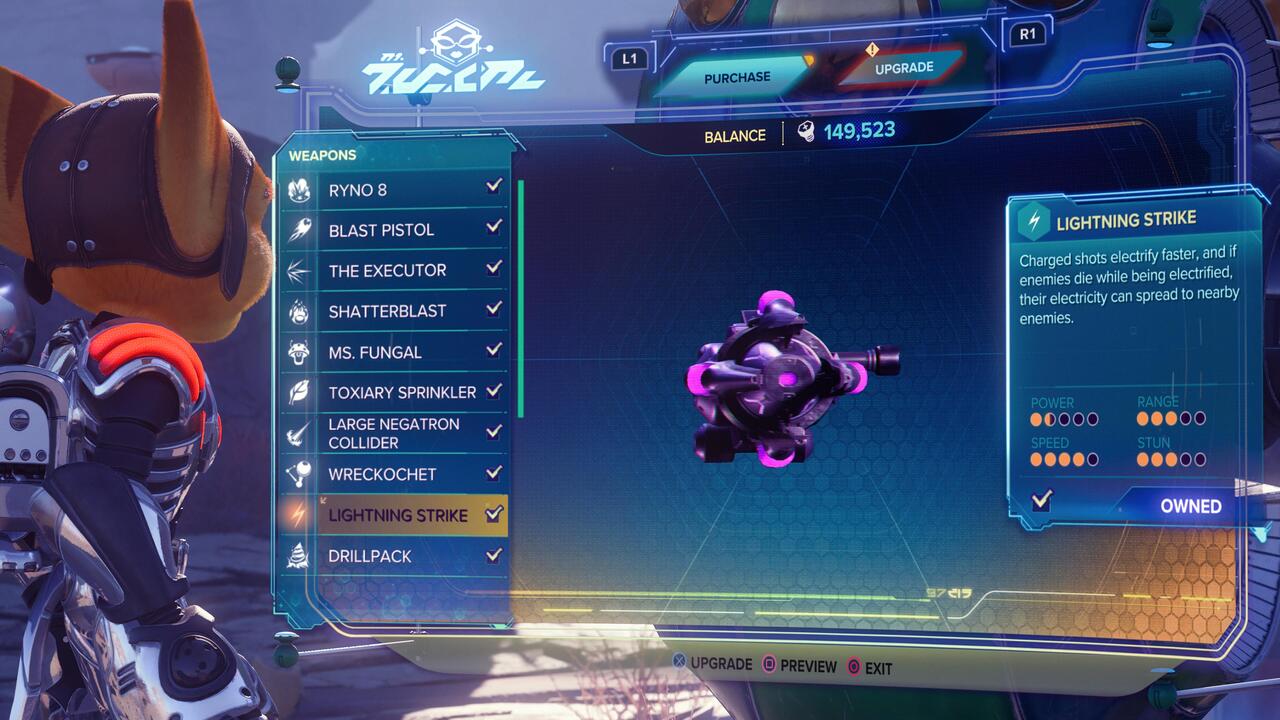 The Lightning Rod can be purchased from Ms. Zurkon for 8,000 Bolts after reaching the Scarstu Debris Field. This is a great weapon for crowd control. It electrifies enemies, immobilizing them and spreading the shock to other nearby foes if they die. The lightning spreads fairly easily, so you can shut down an entire group of enemies in no time with this. 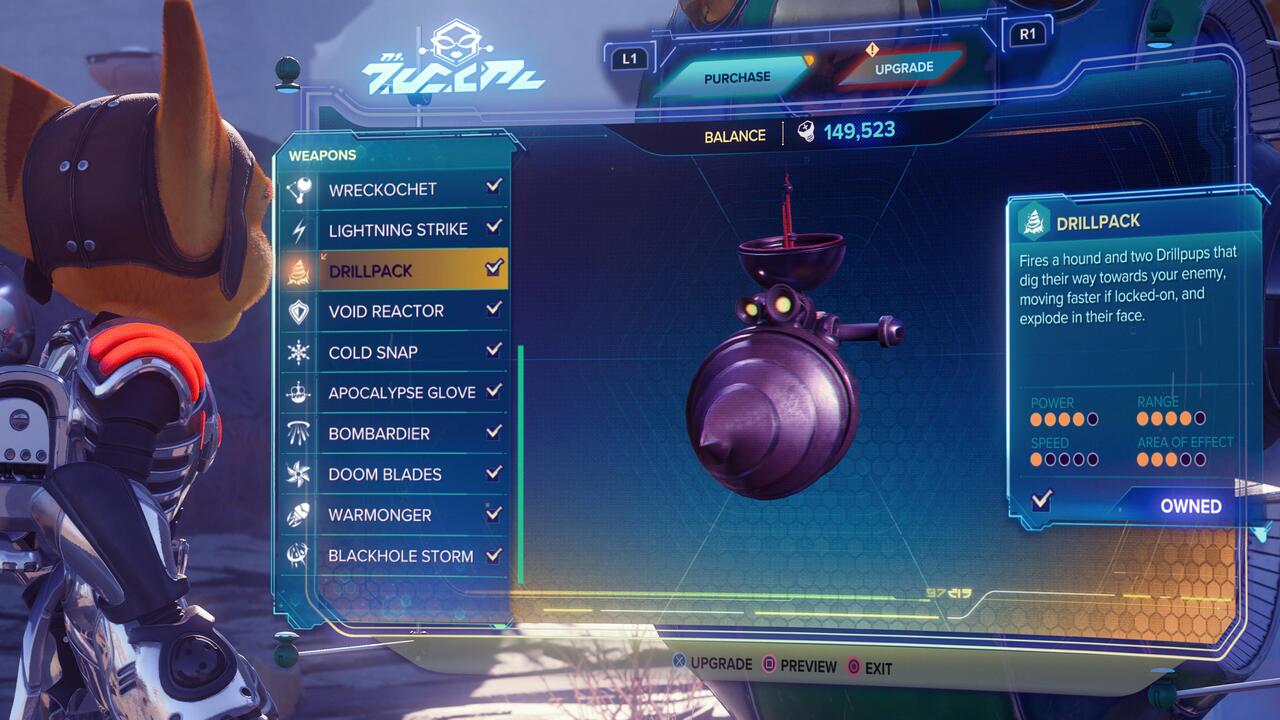 The Drillhound can be purchased from Ms. Zurkon for 10,000 Bolts after reaching the Scarstu Debris Field. This is sort of like a rocket launcher. You can lock onto enemies by pulling the trigger halfway, and a hound will dig under obstacles and jump out at your target once it reaches them. It has a low ammo count and the damage isn’t that impressive, but it really shines with some upgrades like most of the weaker weapons in the game. 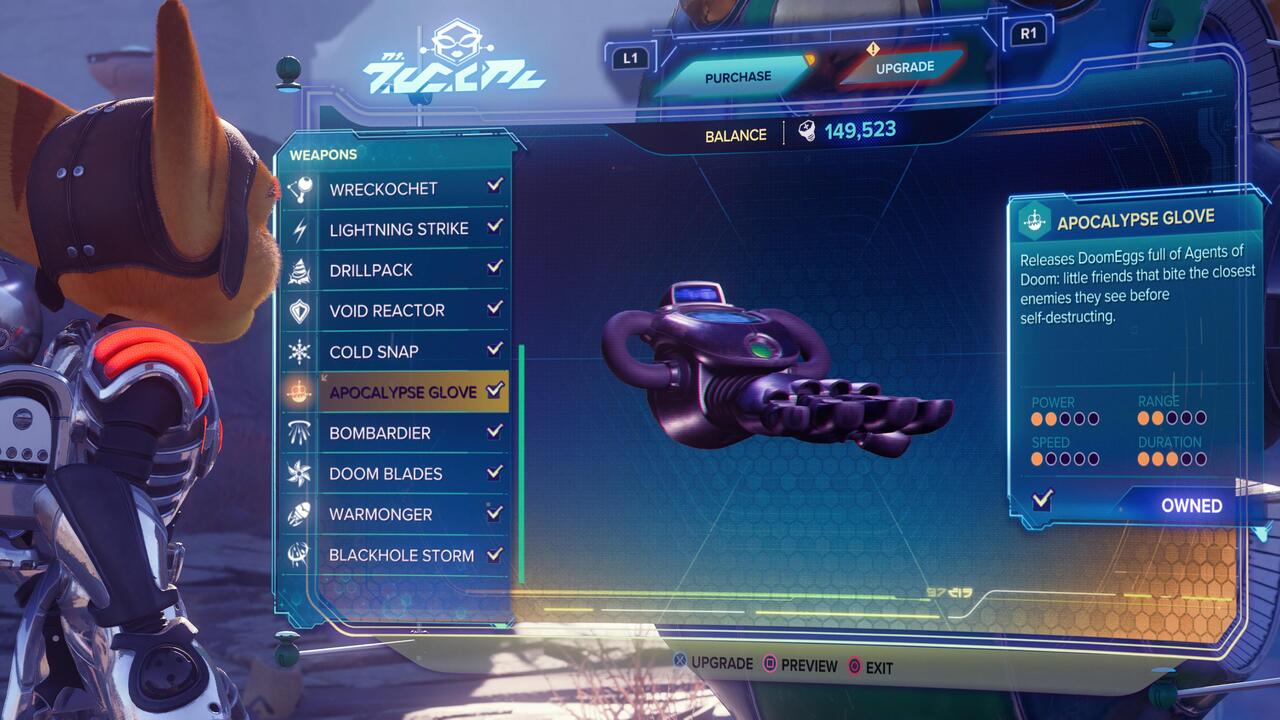 The Glove of Doom can be purchased from Ms. Zurkon for 22,500 Bolts after completing Blizar Prime. Like the Topiary Sprinkler, this is one of the deadliest tools in your arsenal. Each DoomEgg spawns several Agents of Doom that swarm enemies and bite them until they die. You can toss out multiple of these at the same time, so you can essentially spawn your own little army whenever you want. 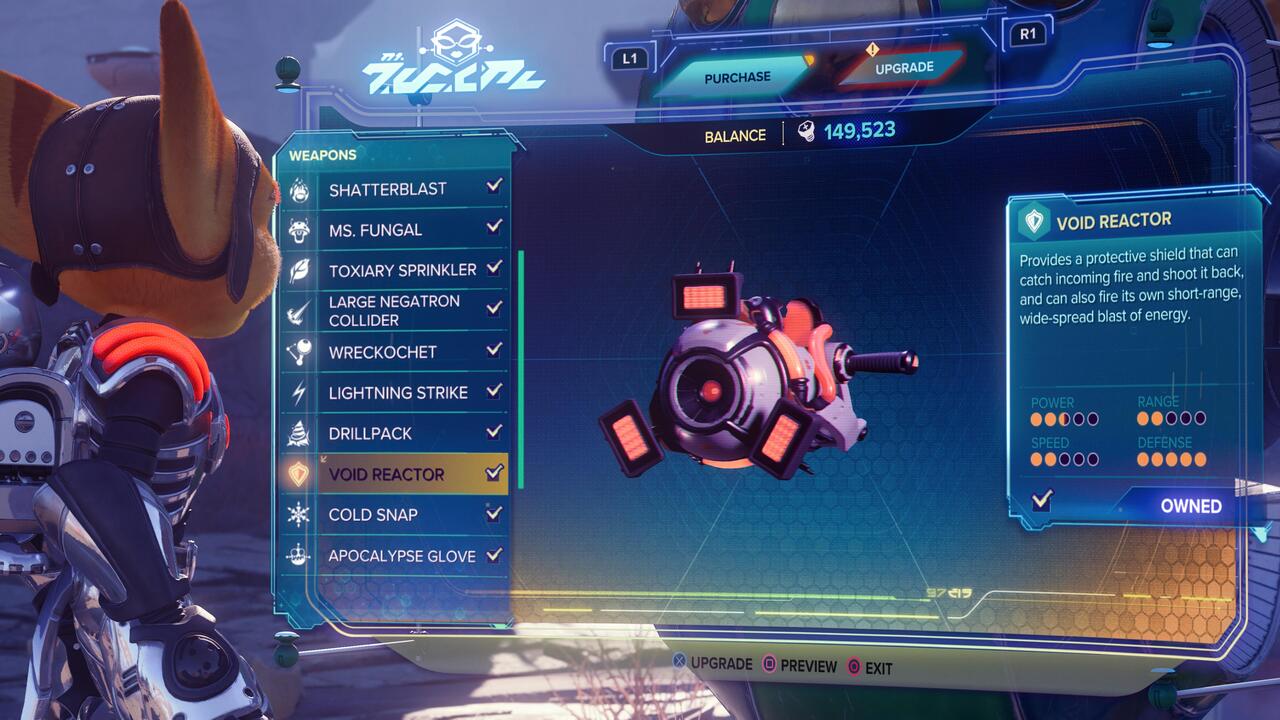 The Void Repluser can be purchased from Ms. Zurkon for 17,500 Bolts after completing Savali. This is probably the worst weapon in the game. It comes with a shield that can absorb enemy shots and fire a blast of energy back at enemies with increased damage, but the range and damage aren’t great. The shield is also a bit finicky, and this weapon just isn’t that fun to use overall. 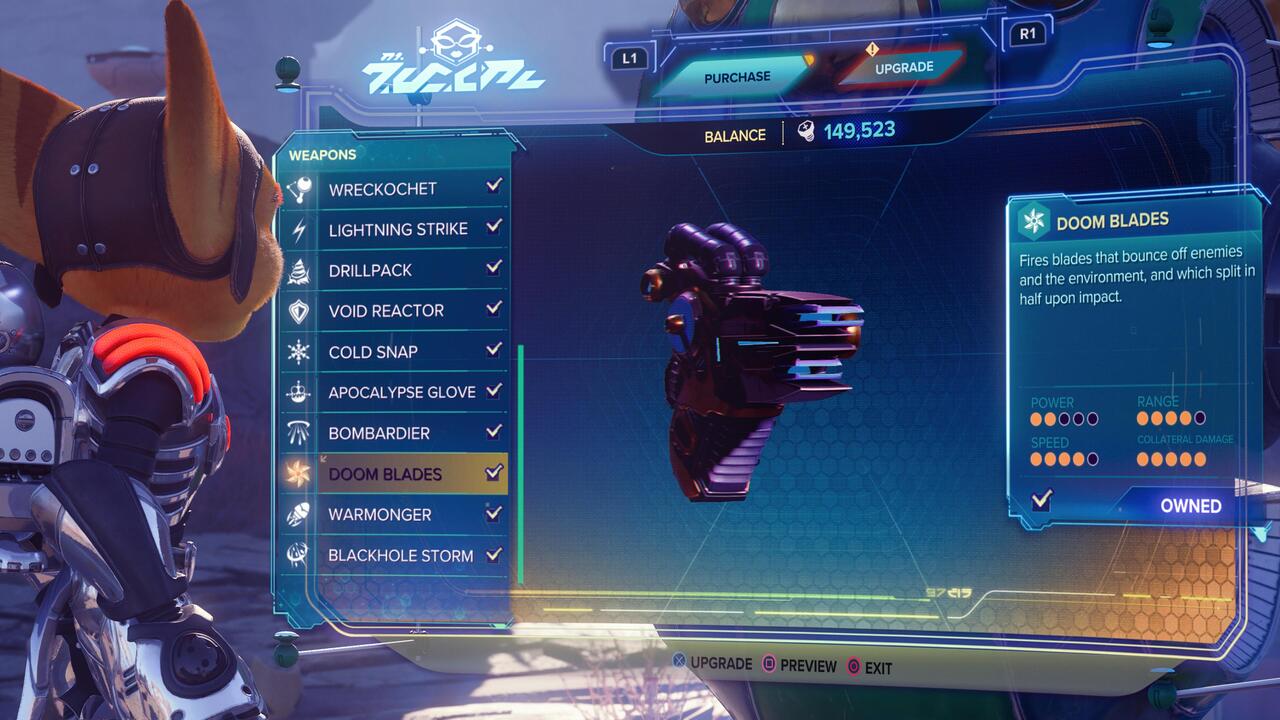 The Buzz Blades can be purchased for 27,500 Bolts after reaching Torren IV. The initial damage from this weapon isn’t that much, but the blades bounce off of enemies and the environment and continue to hurt anything in their path. This gun is perfect for clearing large groups and building up consistent damage on bosses. 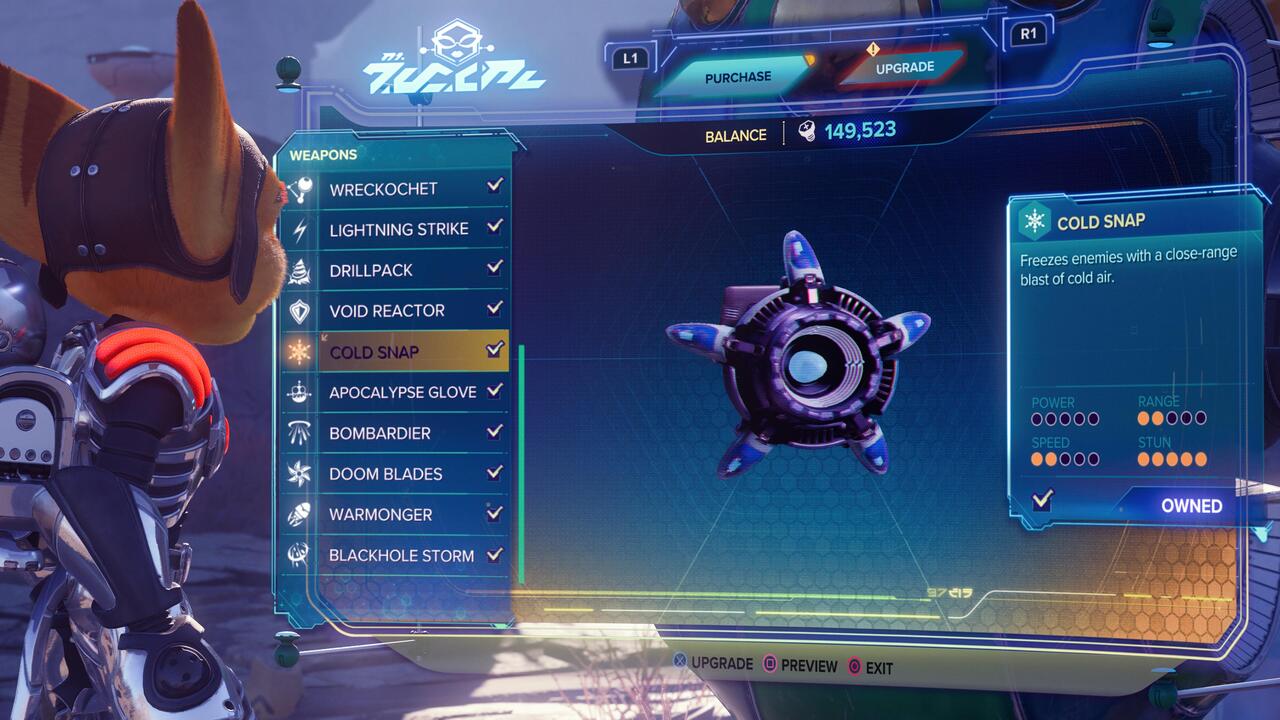 The Cold Snap can be purchased for 22,000 Bolts after reaching Torren IV. This weapon is meant to immobilize enemies like the Topiary Sprinkler, only it freezes them in blocks of ice instead of covering them in plants. You can then break frozen enemies with melee attacks, making this a great way to conserve ammo for other weapons. 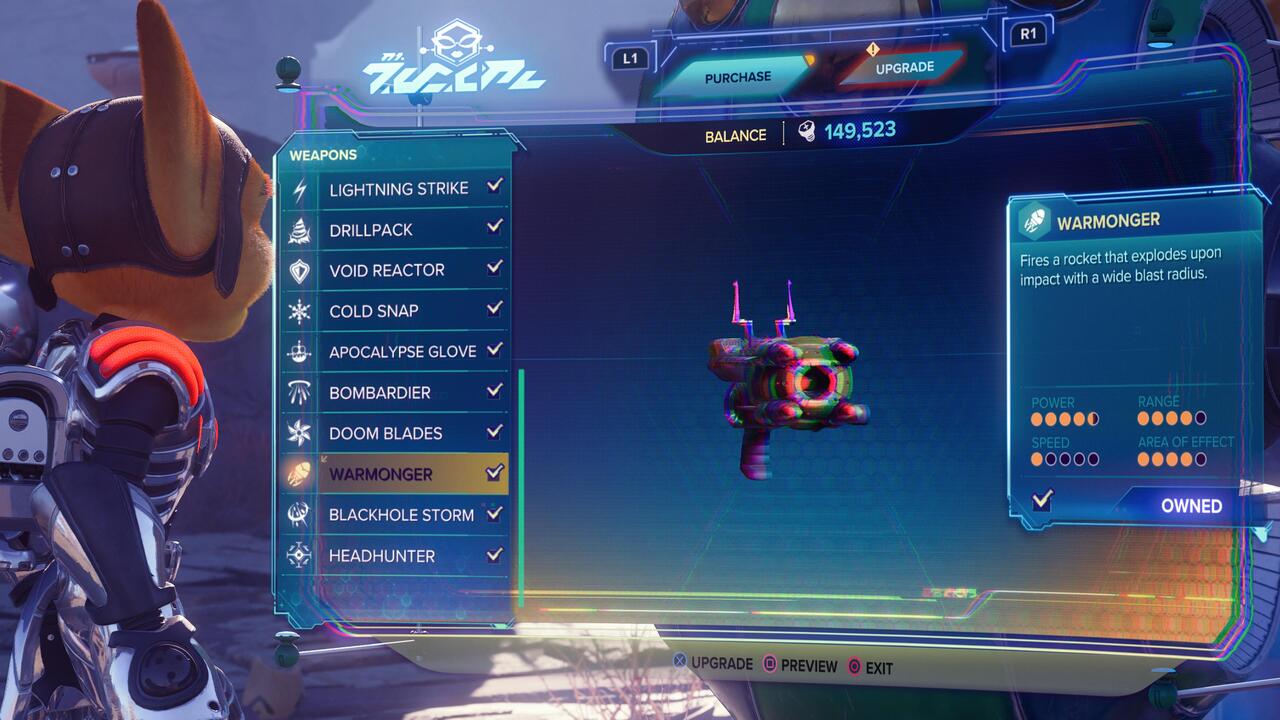 The Warmonger can be purchased for 30,000 Bolts after returning to the Scarstu Debris Field for the second time during the main story. This is a rocket launcher, and there’s not much else to say about it. It does a lot of damage and hurts any enemies caught in the blast radius. 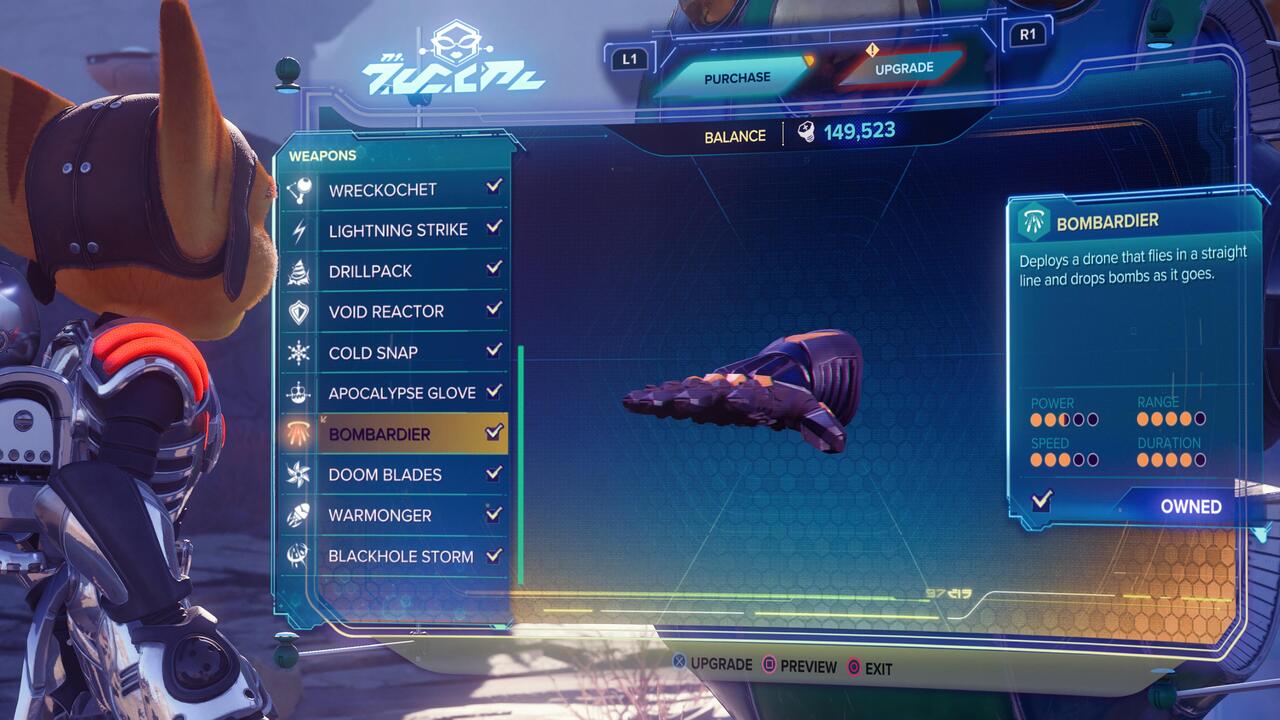 The Bombardier can be purchased for 25,000 Bolts after returning to Sargasso the second time during the main story. This weapon spawns a drone that drops bombs on any enemies in front of you. It works like Mr. Fungi in that you can’t directly control it. It’s just an extra ally that you can toss onto the field if you need assistance. 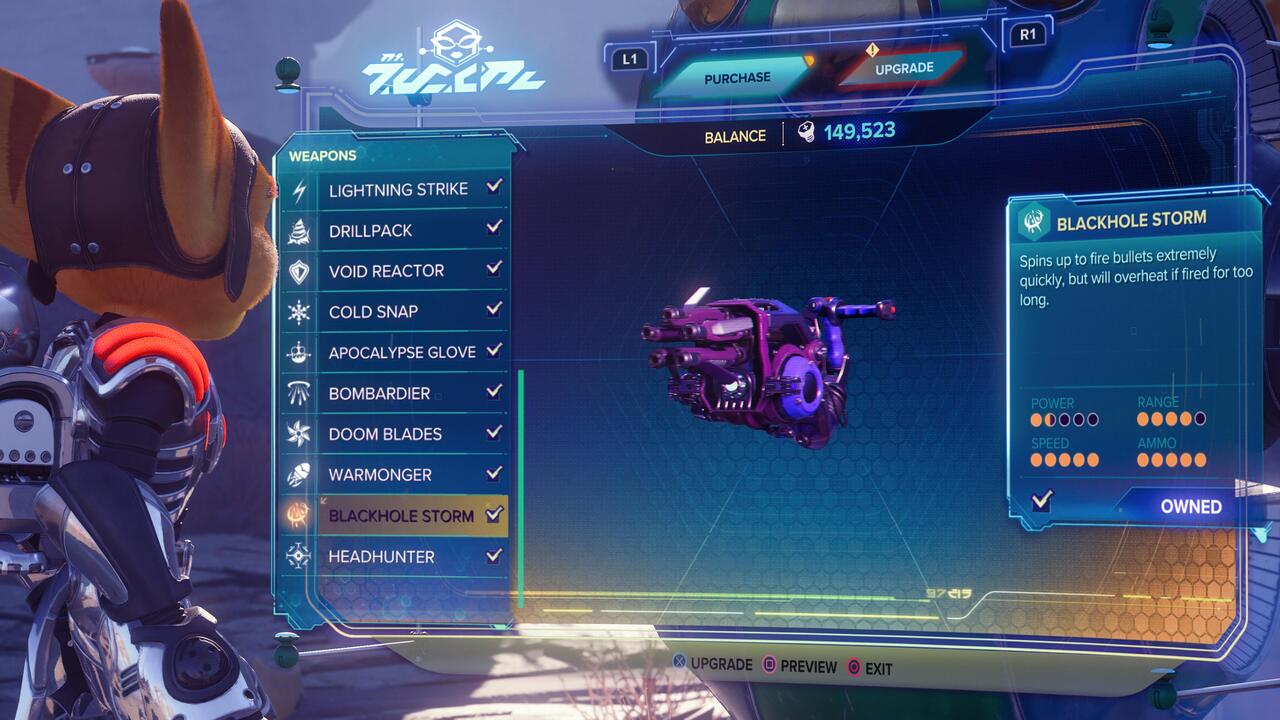 The Blackhole Storm can be purchased for 35,000 Bolts after returning to Sargasso the second time during the main story. This is the minigun of Rift Apart. You can start spinning the barrels by pulling the trigger halfway. The only downside to this weapon is that it can overheat, so try to control your shots and swap weapons when necessary. 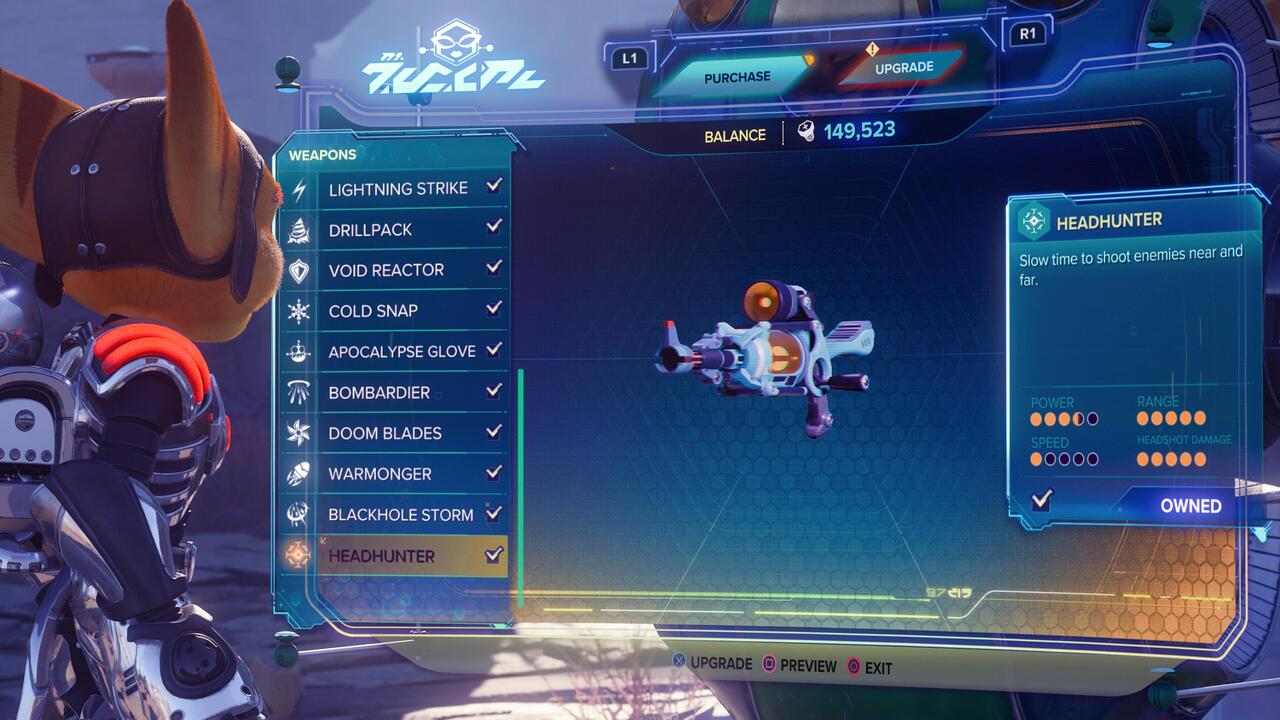 The Headhunter can be purchased for 40,000 Gold Bolts after reaching Ardolis. This is Rift Apart’s sniper rifle. You can slow down time for a small window, giving you an easy opportunity to nail some headshots. As always, targeting weak spots will deal bonus damage. You can upgrade the slowdown period and weak spot damage with Raritanium, and this weapon is nothing to scoff at once upgraded. 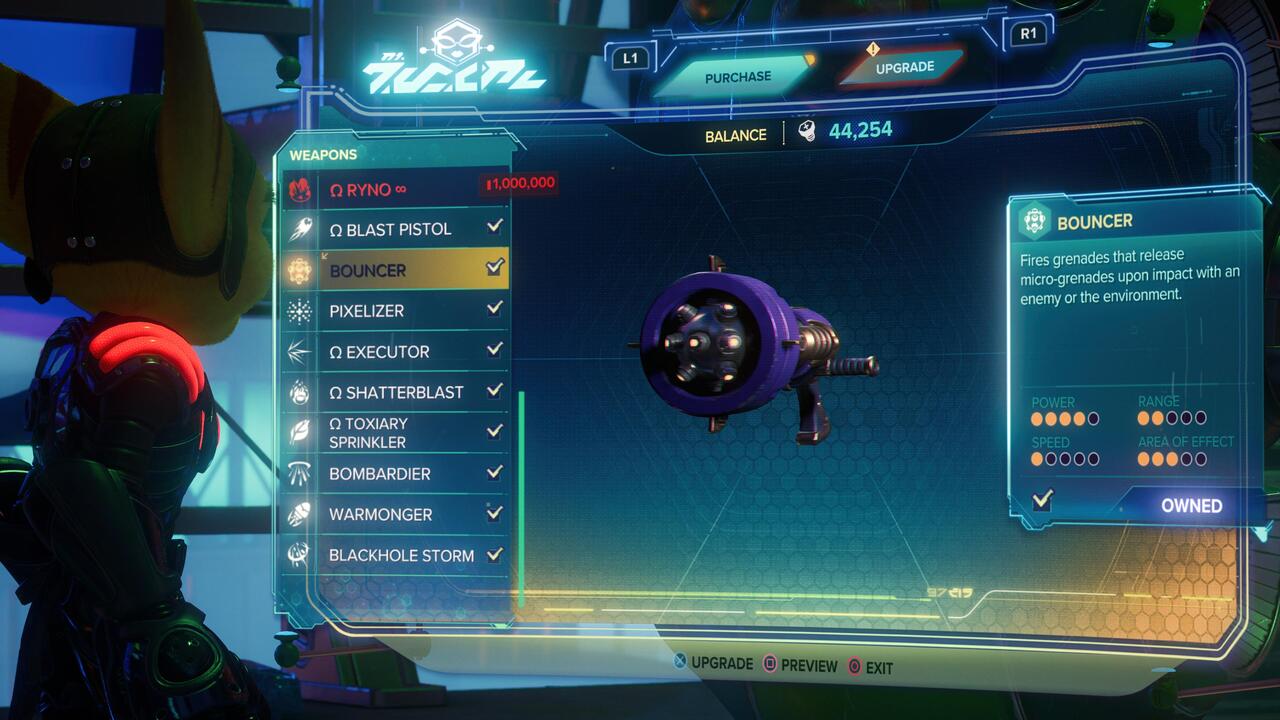 The Bouncer can be purchased for 1 Bolt after starting Challenge Mode, but it’s also one of the weapons included in the deluxe edition of Rift Apart. This weapon fires cluster bombs that release micro-grenades upon impact with an enemy or the environment. It’s a pretty great grenade launcher.

The Pixelizer can be purchased for 1 Bolt after starting Challenge Mode, but it’s also one of the weapons included in the deluxe edition of Rift Apart. This is basically just a shotgun with a cool visual effect. Any enemies you shoot will become pixelized versions of themselves, complete with compressed sound effects. 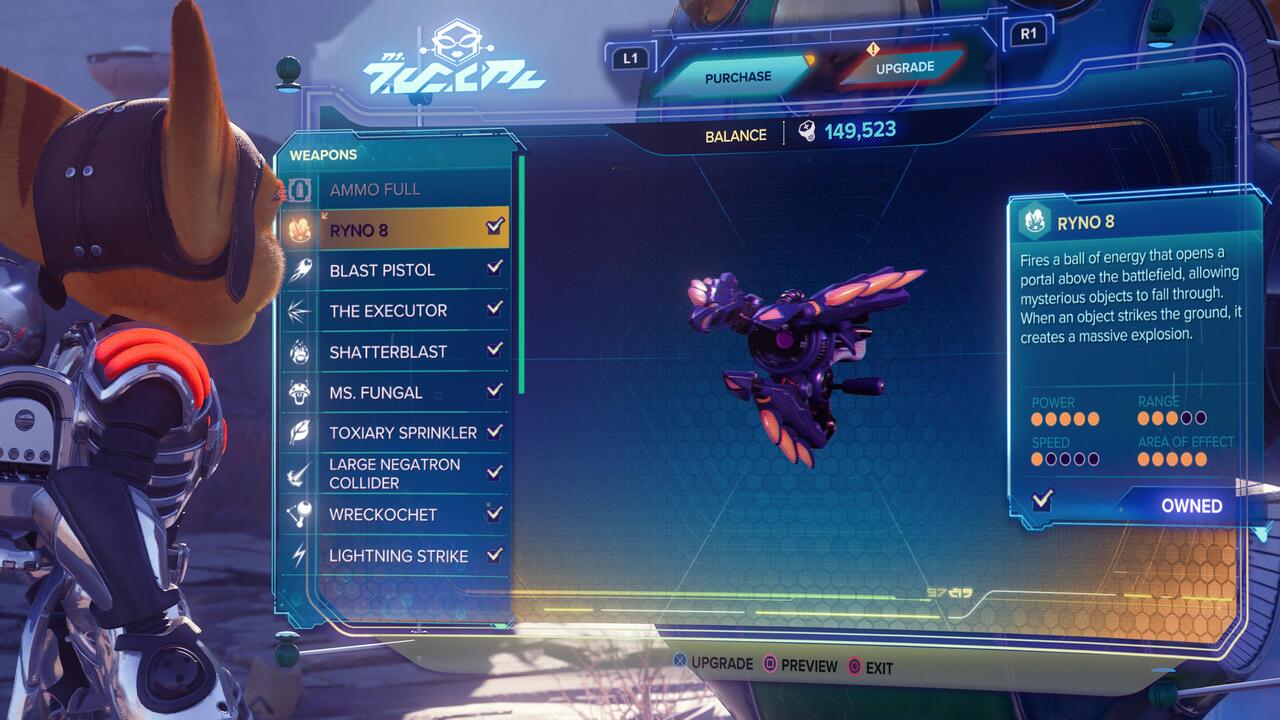 The RYNO 8 can only be obtained by collecting all 10 spybots hidden throughout the game. Some spybots are locked behind side quests, others are found by exploring, and others are rewarded for completing Battleplex challenges. Once you find all of them, Ms. Zurkon will call you and tell you the weapon is now in stock.

Ratchet and Clank: Rift Apart is available now on PlayStation 5. Check out our review of the game here.

Home / Game Guides / Ratchet and Clank Rift Apart: All Weapons and How to Get Them