Rise Of The Tomb Raider Guide: How To Raise The Water In The Prophet’s Tomb 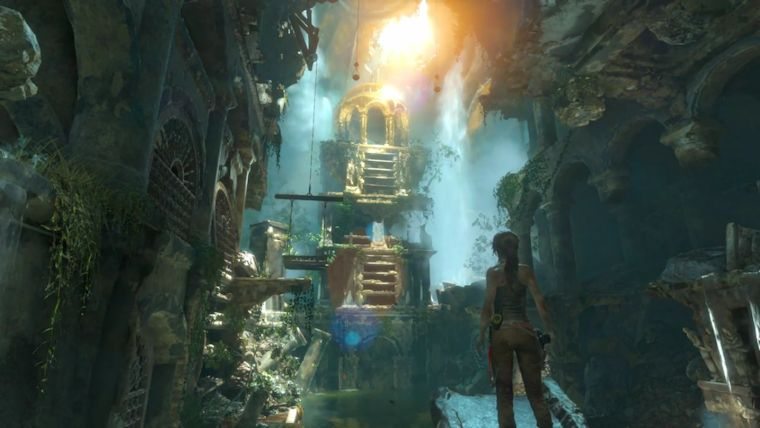 Rise of the Tomb Raider is now finally out and while the number of tombs have definitely been increased, for the most part the actual tomb raiding comes from optional side quest tombs that are available. However, one of the first areas you experience in the game is the Prophet’s Tomb, so we thought we’d give a little guide on how to make it through this first challenge in Rise of the Tomb Raider with its water raising puzzle.

As soon as you enter the main chamber of the Prophet’s Tomb and you start to move around, Lara will comment that you will need to use the water levels to get further.  After that, use survival instinct and go to the forward and to the right and use X or break it open. Now, start to climb up on the opposite side and across to the wooden platform.

Staying on this platform opens up the floodgates to allow more water to go in. Now, go to the front and climb the very open tombs on the wall, and then continue to climb around to the right and then pull yourself up.

While walking across this floor up top, it will start to crumble with a floor spike trap, which will be indicated by the floor in that area turning red and the game slowing down. Quickly jump past it and you will be fine. After that, you’ll see a few pillars in front of you, so head across them. After crossing, enter the hallway and be careful of another floor spike trap, as well as two swinging spike traps, which you saw before, that leads to slowdown where you have to shoot both of them quickly to stay alive.

In the next room, the water has to be raised again. You may think you should jump for the plank in front of you right away, but hold off for a second. Instead, shoot the other hanging plank to the left with the weight above it first, which will cause it to fall in the water. Now, jump onto the hanging wooden platform, but quickly jump across the gap past it before the water rushes in and knocks you off.

Upon crossing, use survival instincts to see a wall that you can break open with X, so do exactly that. After that, jump onto that plank to cause a rush of water that will not only knock you off, but move the platform you previously shot down. Quickly climb aboard that platform in the water and use it as a way to leap onto the climbable wall nearby.

After getting out of water, leap towards and grab onto the top bar that holds the platform that causes the water to rush in. Lara’s weight will cause it to go down again, and the water will rush in, and once again Lara cannot hold on due to the force of the water. However, she will wash out of that room and into the main chamber again and she automatically grabs onto the area you want to go.

All you have to do now is climb up the wall here and go up to the coffin and you will find a surprise, which is interrupted by a group of enemies coming in who start to cause trouble. There is only a quick enemy encounter where you most use your pistol to kill a few enemies, and then you can start doing a little straightforward platforming where you must rush out and escape the collapsing Prophet’s Tomb. With that, you have officially completed the first tomb and really area in Rise of the Tomb Raider.

Home / Game Guides / Rise Of The Tomb Raider Guide: How To Raise The Water In The Prophet’s Tomb