XCOM: Chimera Squad ditches customizable soldiers in favor of 11 agents with set personalities and abilities. These agents cannot die permanently, which is a departure from previous XCOM games, and there is an even greater focus on teamwork and cooperation than ever before thanks to the new timeline turn system. Only four are available at the start of the game, and the rest can be recruited throughout the campaign. 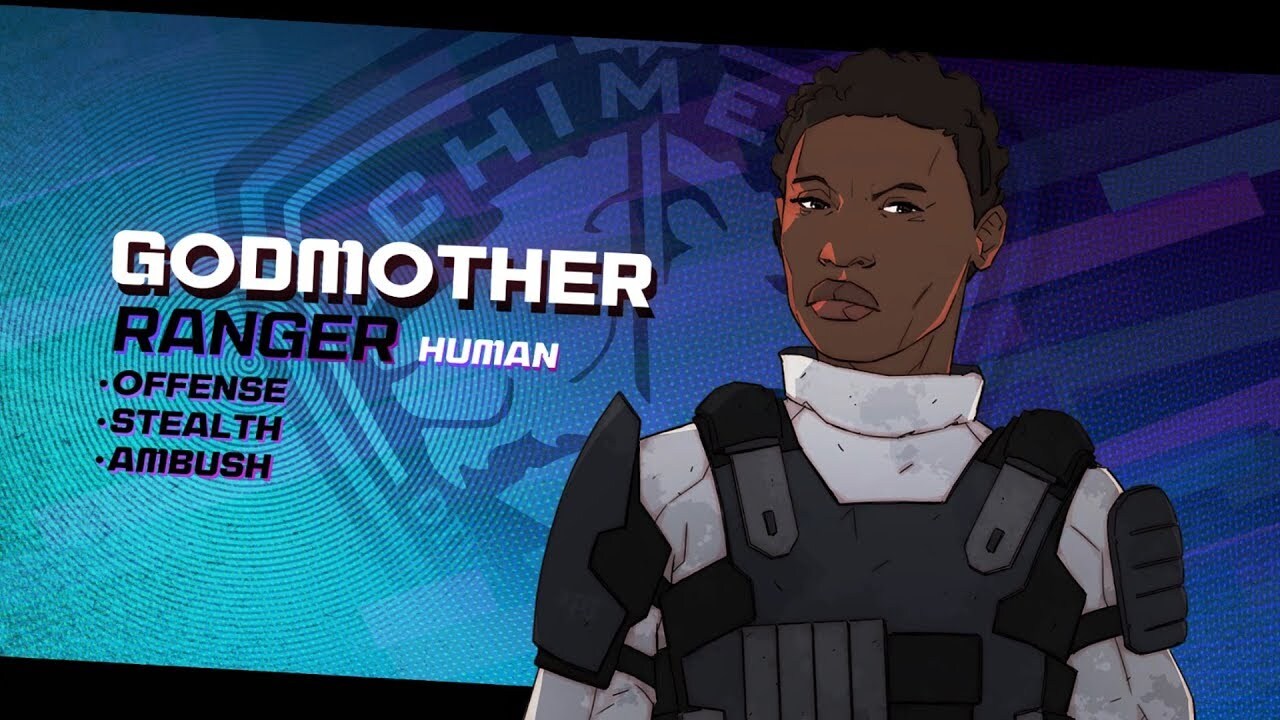 Godmother is a seasoned veteran with no time for nonsense, she demands nothing less than perfection from her squadmates. 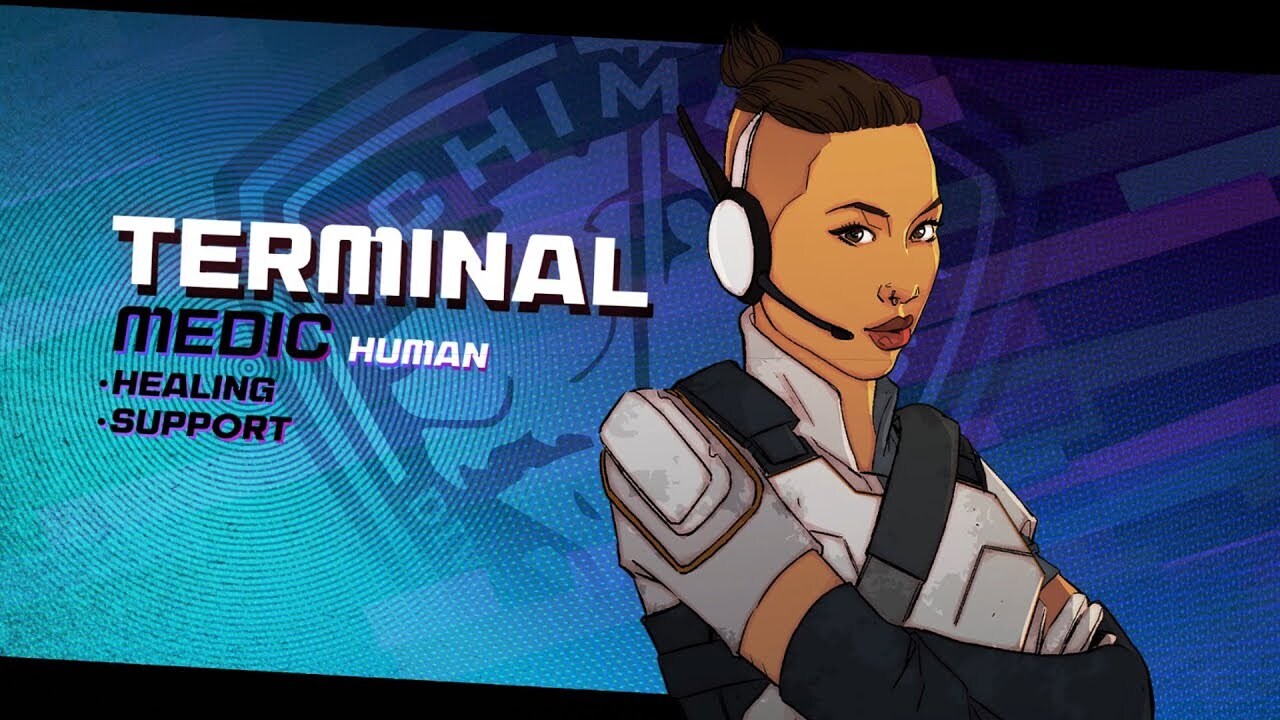 Terminal lost her family in the invasion and was ultimately adopted by a doctor who’d lost her only daughter. She developed an interest in medicine and apprenticed under the doctor for years. Sadly, Terminal was orphaned again when an ADVENT attack wiped out their town. She was pulled from the rubble by a resistance group; once she recovered, she eagerly pledged her skills to their cause.

Terminal proved to be as fearless as an Android in battle, saving hundreds of lives during the war. As Chimera Squad’s sole combat medic, she does what it takes to keep her squadmates breathing: she’s as handy with a gun as she is with a MediKit. 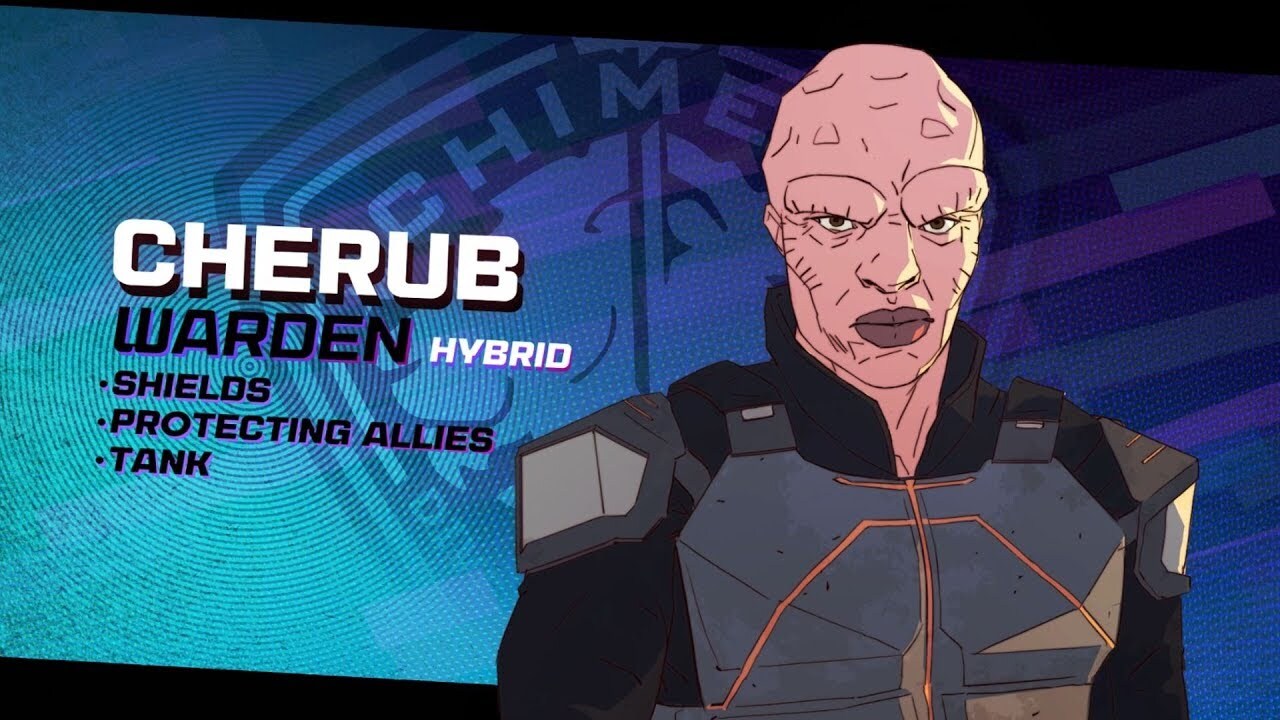 Cherub was among a batch of clones that had received ADVENT training but not yet undergone ADVENT indoctrination by the end of the war. He was found alive in an ADVENT lab, then transferred to a detention center for extensive testing. When the tests confirmed he had no ADVENT sympathies, he was enlisted by XCOM on a trial basis.

Cherub’s positive attitude and enthusiasm have been helping lift the morale of those around him ever since. His efforts to support his squadmates and improve their dispositions have proven his dedication on multiple occasions. 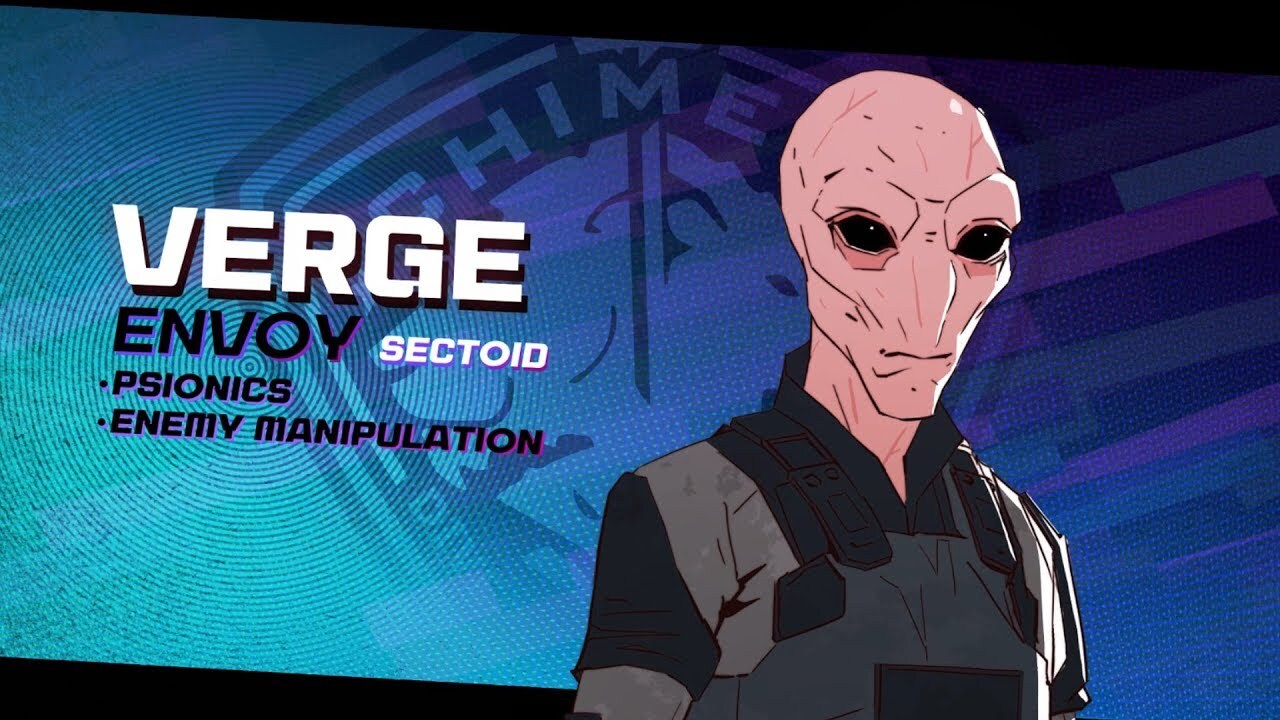 Verge was part of an ADVENT experiment to subvert Earth governments by mind-controlling human subjects. A master puppeteer, Verge used high-ranking officials to reassure the populace that the aliens had their best interests at heart. This intimate mental contact eventually led Verge to gain empathy for humanity, and he began supplying resistance groups with information.

Now, Verge is the strongest offensive psion in Chimera Squad. Adept at disabling enemies and influencing their mental states, he is also skilled in telekinesis, able to rip enemies out of cover to improve squadmates’ hit chances. 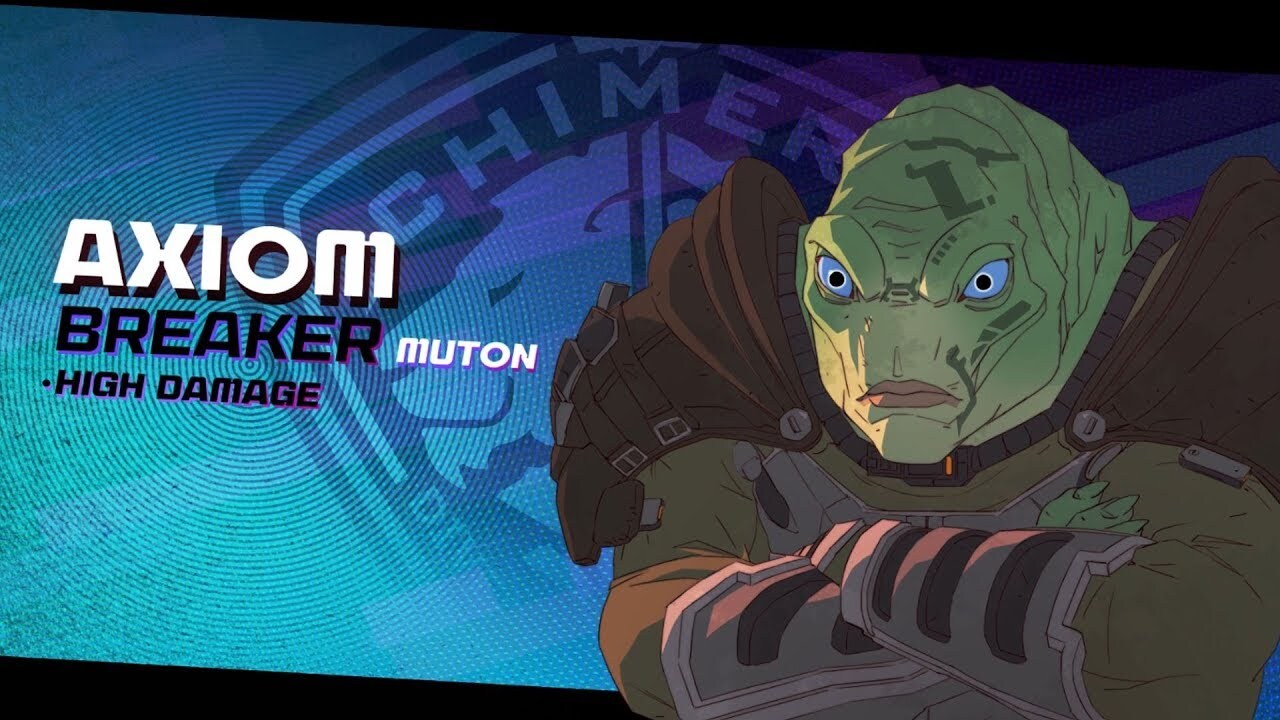 Born and trained on an invasion transport ship, Axiom landed on Earth in 2015 and was among the first wave of alien invaders. Throughout the occupation, he provided security for high-value targets across numerous ADVENT city centers and facilities. After ADVENT’s surrender, he played a pivotal role in containing a chryssalid outbreak and limiting human casualties, earning him recognition from XCOM and eventually a place in their ranks.

Axiom masterfully controls his temper and uses his rage to fuel his strength during combat. He can smash cover, panic enemies during a Breach, and perform a devastating quake maneuver that damages all nearby enemies. You definitely don’t want to make him mad. 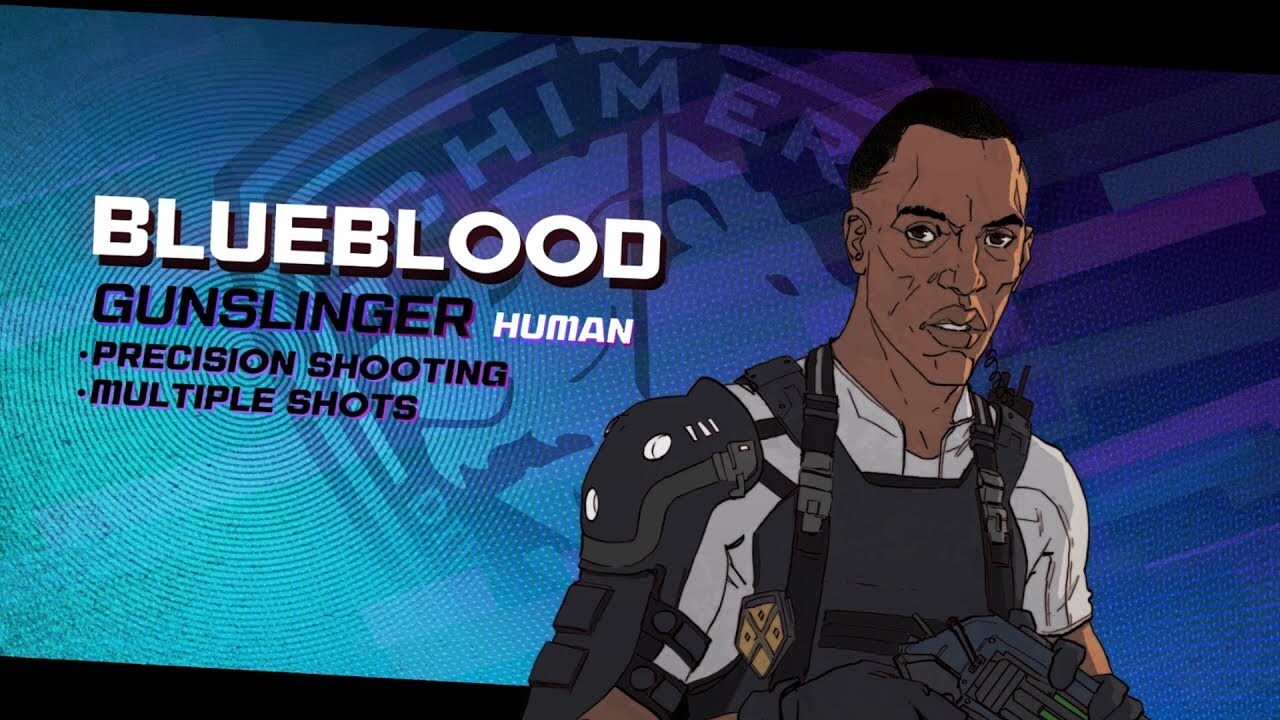 Blueblood spent his formative years in City 31, during the occupation, with his father, a third-generation police officer. When his father transitioned from police work to private investigation, Blueblood apprenticed with his father’s detective agency, helping the underserved. He joined 31PD in its inception.

Blueblood’s strengths are his strategic mind and his precision targeting, particularly with his special sidearm, the Lancer Pistol, which can blast through line-of-sight penalties and enemy cover bonuses. 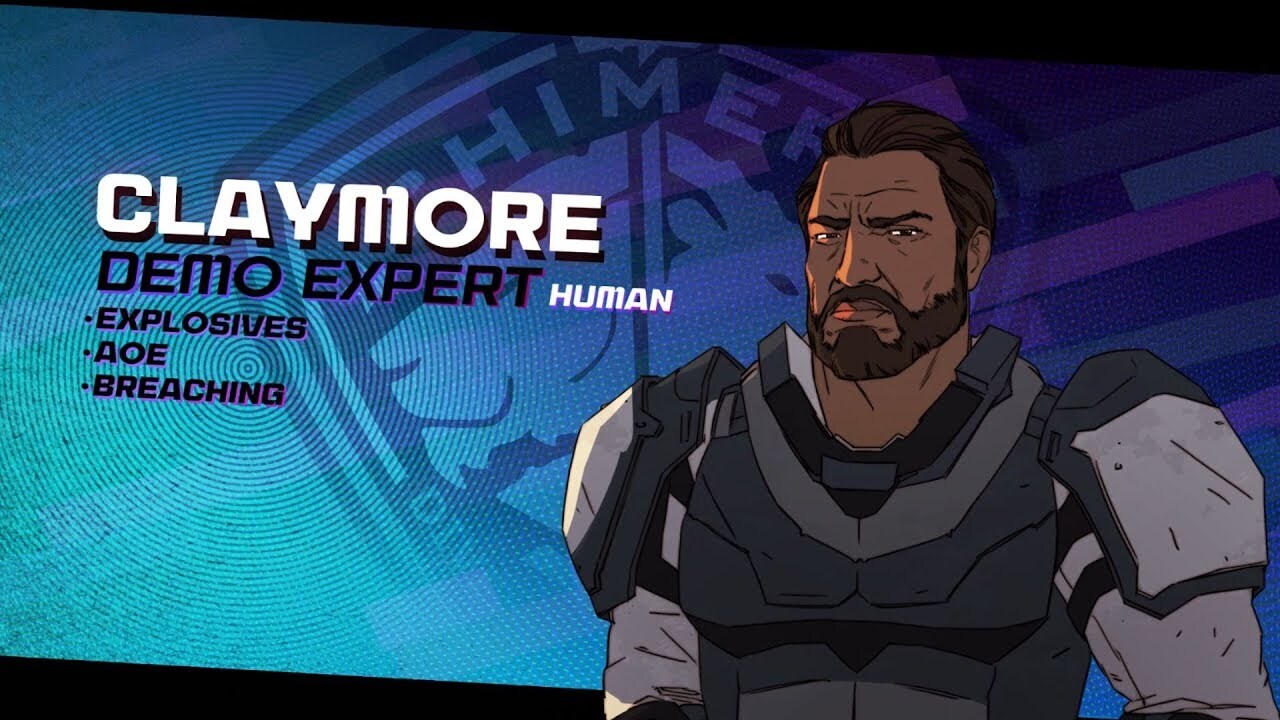 Claymore was a young boy when the invasion occurred. His childhood became a journey between refugee camps and city outskirts as his family sought safety wherever they could. Thanks to his engineering-professor parents and his own penchant for tinkering, Claymore taught himself the ins and outs of explosive devices and began manufacturing grenades for the resistance.

On Chimera Squad, Claymore outputs heavy damage through special-made explosives. His devices remove obstacles, allow the squad to breach dangerous facilities, and give his enemies something pretty to look at during their final moments on this planet. 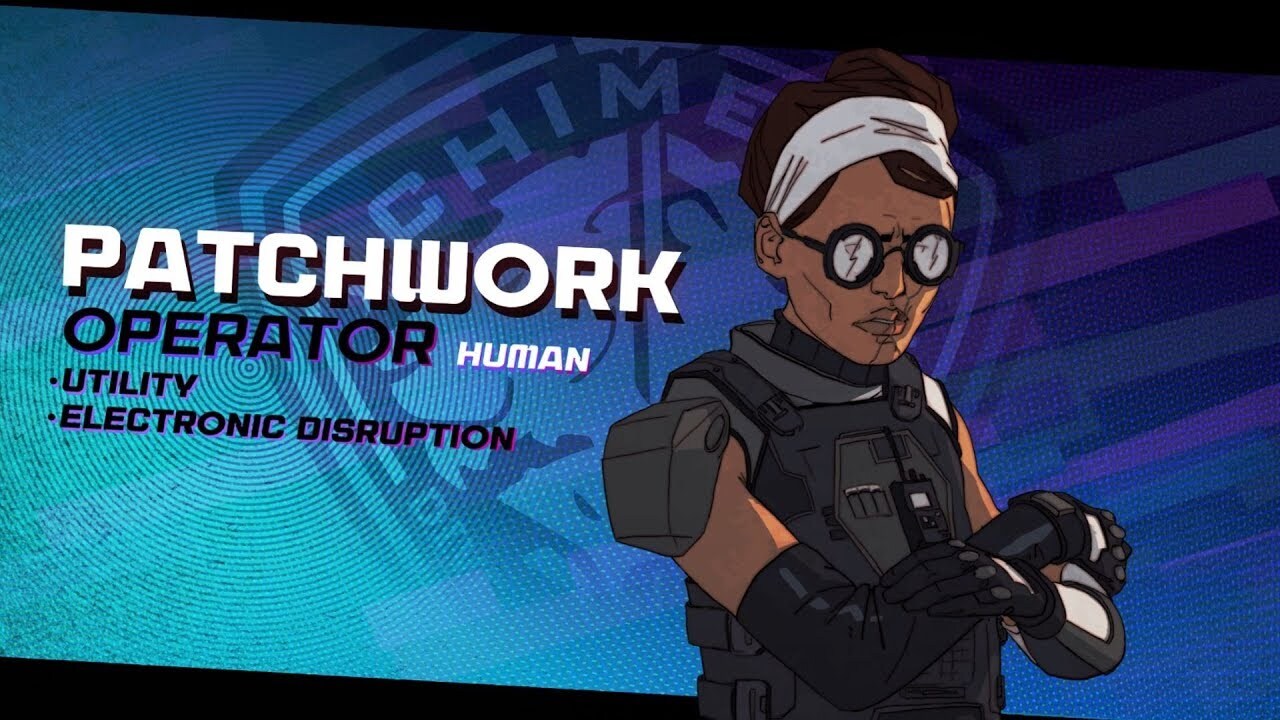 Patchwork lost her entire family during the invasion and suffered three traumatic amputations. She ended up in an ADVENT orphanage, where she was fitted with prosthetic limbs and trotted out as propaganda, proof of the aliens’ benevolence. Brilliantly intelligent, her aptitude with technology was rivaled only by her curiosity. After discovering evidence of ADVENT atrocities, she engineered her own rescue by XCOM and joined their cause.

Patchwork’s specialty is all-caps TECH. She is a valuable combatant against robotic enemies, a master hacker of security systems, and an expert in the strategic application of deadly electric shocks. 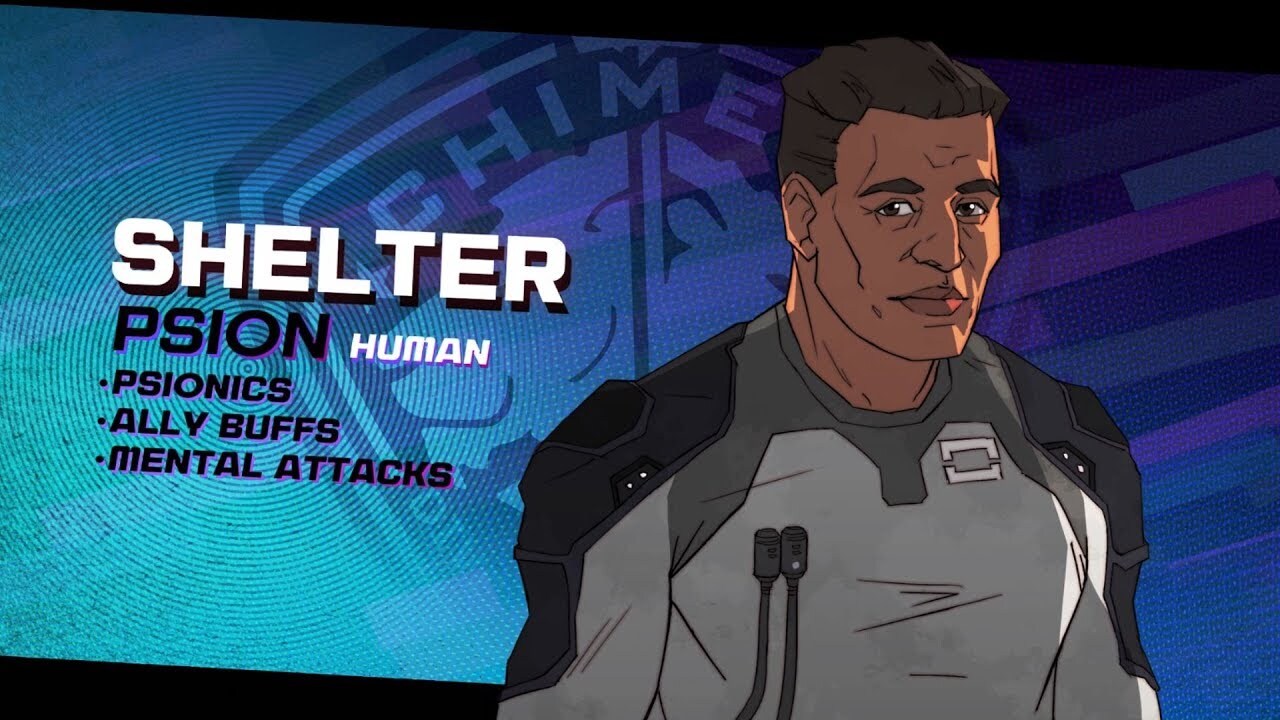 Shelter was separated from his family during the invasion, then processed into a resettlement camp. When he started showing signs of psionic aptitude, he was shipped off to an ADVENT research facility for human-born psions. ADVENT forced him to use his abilities to harm others, and he ultimately fled their control.

Now part of XCOM’s Chimera Squad, Shelter prefers to use his psionic powers defensively. He buffs his allies, relocates both friend and foe, and can even create a psionic clone with those same abilities. 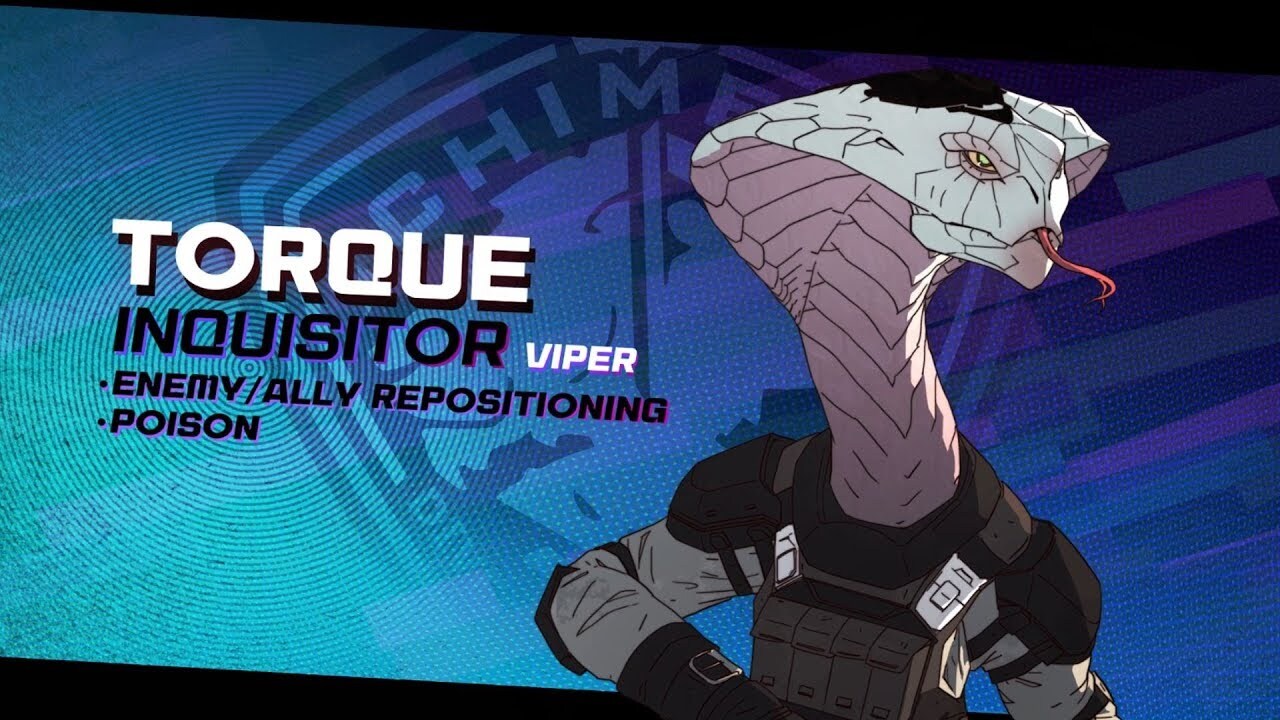 Hatched at a New Arctic facility in 2020, Torque spent the alien occupation as a tracker hunting down resistance groups. After XCOM won the war in 2035, Torque got herself out of detention by offering to train rookie soldiers against ADVENT tactics. She worked alongside Colonel Kelly, and the two formed a close bond, paving the way for Torque’s eventual placement in Chimera Squad.

Torque is a master of unit manipulation, using her long tongue to drag enemies from cover and pull squadmates out of harm’s way. She can poison enemies to deal sustained damage or bind enemies and prevent them from taking any actions. 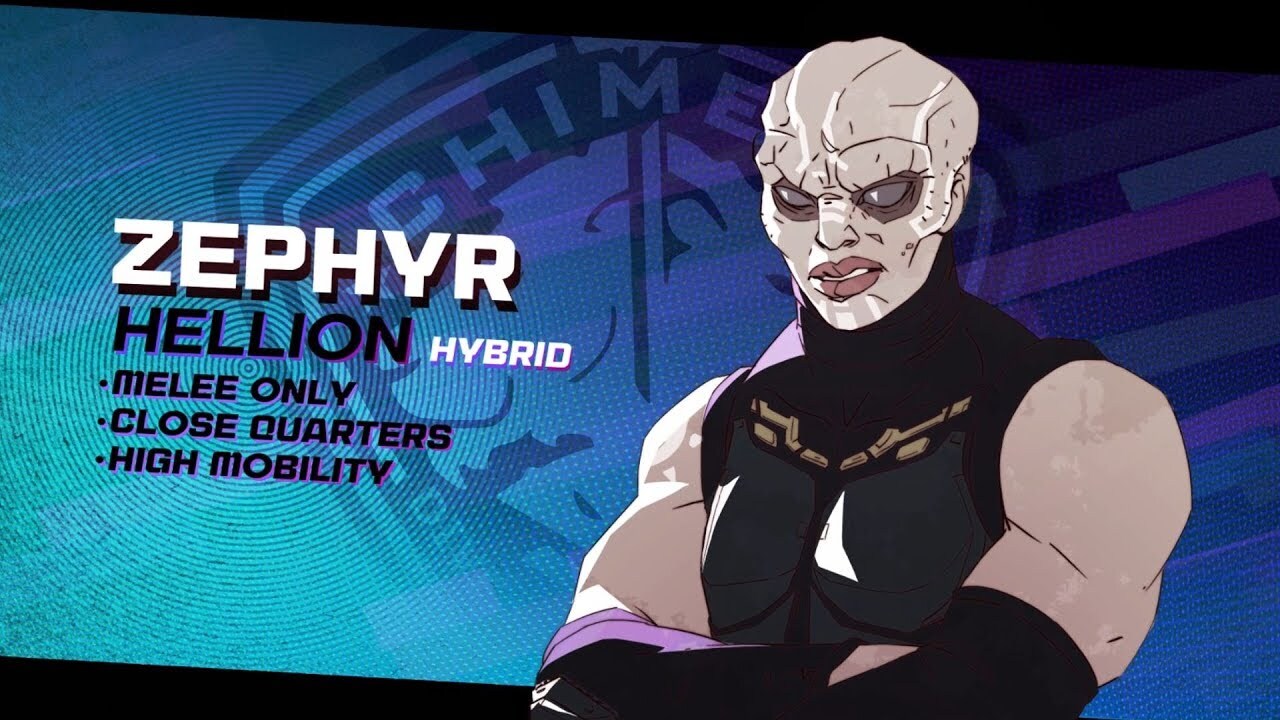 Officially “created” in 2021 per ADVENT records, Zephyr served as a loyal, mind-controlled ADVENT soldier until she was mentally liberated by a resistance faction, the Skirmishers. She joined the cause of her saviors and fought alongside XCOM until the war’s end.

Zephyr is a living weapon and one of Chimera Squad’s most brutal melee combatants. She can pummel enemies with brute force, parry incoming damage, then vanish across the battlefield with her blink-and-you-miss-it mobility.