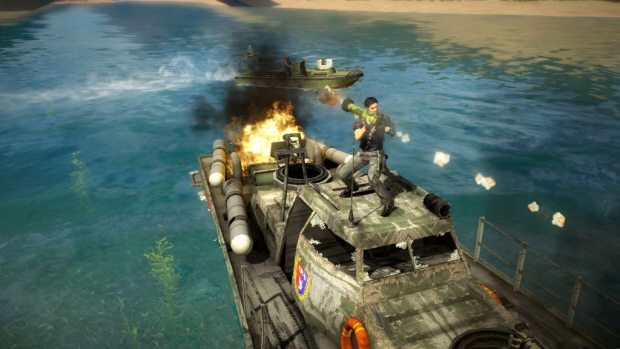 Last month, the developers behind the ambitious scheme to bring  gamers a fully functional, open-world multiplayer for Just Cause 2 released a video as concrete evidence that they’re taking their work seriously. Needless to say, grappling onto flaming jets and parachuting off mountain tops looks that much more fun when you’re doing it with friends, and the JC2-MP indie devs from Australia are that much closer to making this gamer dream a reality for PC players.

One player who participated in the frenzied beta edited a clip together detailing the destruction. According to the team’s official site, the previous testing period for the Just Cause 2 multiplayer component has officially ended and will conclude with a third public beta:

“Thank you for testing! We got many useful crash reports that we are going to process and fix. Once we think most should be fixed, there will be another test which will be announced everywhere. This third public test has already shown a massive improvement in stability. There have been way less crashes and with the new launcher, a lot more people were able to join.”

Check out all of the chaos and deluded fun that you PC players may find yourselves in the midst of sometime soon: